Nutritional Features and Bread-Making Performance of Wholewheat: Does the Milling System Matter?

Foods, food ingredients, and their balanced consumption are recognized to have an important role in achieving or maintaining a state of wellbeing by acting as carriers of functional components and bioactive molecules. However, the potential contribution of foods to consumers’ health has so far only been partially exploited. The rapidly evolving scenario of the coronavirus disease 2019 (COVID-19) pandemic is stimulating profound reflection on the relationships between food and the etiological agent, the severe acute respiratory syndrome coronavirus 2 (SARS-CoV-2). Here, the status of knowledge regarding food as a possible defense/co-therapeutic strategy against the SARS-CoV-2 coronavirus is considered through the discussion of two main current lines of research. One line of research relates to the role of micronutrients, food components, and diets in the strengthening of the immune system through clinical trials; formulations could be developed as immune system enhancers or as co-adjuvants in therapies. The other line of research relates to investigation of the chemical interactions that specific food compounds can have with host or virus targets so as to interfere with the viral infective cycle of SARS-CoV-2. This line requires, as a first step, an in silico evaluation to discover lead compounds, which may be further developed through drug-design studies, in vitro and in vivo tests, and, finally, clinical trials to obtain therapeutic molecules. All of these promising strategies promote the role of food in preventive/co-therapeutic strategies to tackle the COVID-19 pandemic.
Keywords: food; COVID-19; SARS-CoV-2; micronutrient Clinical trial; immune system; in silico study; protein interaction food; COVID-19; SARS-CoV-2; micronutrient Clinical trial; immune system; in silico study; protein interaction

Foods are complex systems containing macro- and micronutrients, as well as plant secondary metabolites, that can take part in biochemical processes and help to achieve or maintain a state of wellbeing [1,2,3]. In the past few months, the potential contribution of foods to addressing the coronavirus disease 2019 (COVID-19) pandemic has become a highly debated topic, fueled by misleading fake news that is not supported by scientific results [4].
Coronaviruses (CoVs) are positive-sense single-stranded RNA viruses (Group IV of the Baltimore classification). CoVs are part of the Coronaviridae family and fall into the Orthocoronavirinae subfamily, which includes four genera: Alphacoronavirus, Betacoronavirus, Gammacoronavirus, and Deltacoronavirus [5,6]. Until 2019, six coronaviruses capable of infecting humans were known. Two of these, both from the Betacoronavirus group, caused major epidemics characterized by fatal respiratory disease: SARS-CoV, responsible for severe acute respiratory syndrome (SARS) in 2002 in the province of Guangdong in China; and MERS-CoV, responsible for Middle-East respiratory syndrome (MERS) in 2012 in the Kingdom of Saudi Arabia [7]. Recently, a new CoV, called severe acute respiratory syndrome coronavirus 2 (SARS-CoV-2) [8], was responsible for the outbreak of the COVID-19 pandemic on 31 December 2019 in China [9]. The previous SARS and MERS outbreaks involved 29 and 27 countries, respectively, and, given that over 170 countries have been affected by the COVID-19 pandemic after only 3 months, the severity of the current infection is evident [10,11,12]. The most common symptoms and signs of SARS-CoV-2 infection are respiratory symptoms, fever, dry cough, fatigue, and dyspnea [13,14], whereas the clinical manifestations of infection range from asymptomatic to severe pneumonia. It is noteworthy that pneumonia, a lower respiratory tract infection, has occupied the first position in the communicable disease rank and the fourth position in the top ten causes of death globally [15].
Although the design and production of a vaccine and its safe use represent the best solution to control the pandemic, to date, no pharmaceutical treatments or vaccines are available for COVID-19 [16]. However, unlike bacterial infections, viral diseases are often not treated with drugs because of latency, viral resistance, high mutation rates, and several frequent adverse side effects of treatment [17,18,19]. Therefore, eradicating viral diseases is rather challenging, and many viruses remain without preventive vaccines or effective antiviral treatments. Currently, only a few therapeutic protocols are available to reduce symptoms such as fever, pain, and impaired breath functionality, or to reduce diffuse microclots in the lungs [20].
Without a definitive effective treatment, a large number of research groups from all over the world are contributing their efforts to exploration of novel prevention or co-therapeutic approaches [21,22,23]. On 29 April 2020, 4 months after the outbreak started, 1580 articles in Scopus included the keyword "COVID-19", and by 29 May 2020 the number had reached 4091 articles.
In this review, the role of food and food nutrients in the prevention and intervention of pathology is thoroughly reviewed. Two ways to tackle COVID-19 with food are discussed, namely the untargeted approach through immune enhancement, which is currently being investigated in clinical trials, and the targeted approach through the interaction with host or virus proteins (Figure 1), which is being investigated by in silico studies. The strengthening of immune systems has been deeply investigated for previous viral infections; this approach is a part of several ongoing studies related to the current COVID-19 outbreak and is particularly interesting for elderly or immunodepressed populations [24,25]. The other line of research is focused on investigation of the structure [26], the mode of action [27], and the possible targets [28] of SARS-CoV-2. Food and natural products are in fact excellent sources for discovering novel antiviral tools, revealing new structure–activity relationships, and developing effective preventive/co-therapeutic strategies against viral infections [29,30,31].

The clinical trials here reported were obtained using the Find Studies >New Search section in the U.S. National Library of Medicine Clinical Trials website [32]. The keywords “COVID-19” or “SARS-CoV-2” were searched in the “Condition or disease” field, with “All studies” selected in the “Status” field. Using these criteria with the two keywords, over 1800 studies were found on 24 May 2020. The twenty-three studies reported herein (see Table 1 and Supplementary Table S1) were selected by manually choosing only trials regarding food or nutrient topics and excluding all others in order to offer a comprehensive view of the current clinical trials on COVID-19 related to food as of 24 May 2020.
The in silico studies reported herein were obtained using the PubMed, Scopus, and Google Scholar databases. The keywords “in silico” or “docking” were paired with “SARS-CoV-2” or “COVID-19” to obtain articles published as of 4 July 2020. No language restriction was imposed. Some of the most relevant articles regarding food components were selected manually to give an overview of the current in silico studies on COVID-19 related to food. The selected articles are shown in Table 2.

3. Food as an Immune System Enhancer in Current Clinical Trials

The potential contribution of food to consumers’ health and wellbeing has so far been only partially exploited by food science. We expect that the pandemic health emergency and the urgent need to strengthen prevention and control strategies will contribute to the mobilization of research efforts in innovative topics including nutraceutical activities, food/drug interactions, improved bioavailability, and novel formulations of natural food components. Food-based approaches generally offer the advantage of reduced adverse side effects with respect to conventional pharmacology approaches.
A promising approach that involves food chemistry could be the formulation of food-based immune enhancers for COVID-19 patients to allow the proper intake of macro- and micronutrients and, at the same time, to help reduce infection severity.
Although micronutrients are safe compounds with important preventive and co-therapeutic activity for the treatment of many viruses, potentially including SARS-CoV-2, it should be considered that these molecules act on our biological system, and therefore, it is important to take food supplements in the correct doses, following expert advice, and only when it is necessary. It has been widely demonstrated that excessive doses of vitamins, mainly lipophilic ones, or minerals can provoke side effects that are harmful to human health. As confirmed by the Food and Agriculture Organization of the United Nations (FAO), the main preventive strategy against COVID-19 disease is the consumption of a healthy and balanced diet [107], whereas the use of supplements should be recommended only when really necessary.
In this context, the ongoing clinical trials discussed herein will give useful indications of the efficacy of the proposed protocols (compounds, dose, administration, etc.) and direct research toward new strategies.
The other strategic approach reported herein involves the discovery of lead compounds from food matrices through in silico studies; selected compounds can then be developed in drug-design studies, evaluated further in vitro and in vivo studies, and finally tested in clinical trials. Therefore, the food-science community could provide the most challenging and qualified contributions to investigation of the role of food both in the normal context and in the health emergency phase as it stands today.
In conclusion, many eating habits and beliefs about the role of food in human health have been shaken like an earthquake. At the end of the two-phase emergency, all of the main institutions, governments, and international agencies involving food and health consumers and the entire food chain are expected to kick-start and modify the global approach to food and its consumption, production, or transformation. In the remote past, humans used food as unique medicine; food-processing industrialization has reduced the natural value of their components, and the excessive use of ultraprocessed food has also favored morbidity conditions such as obesity, diabetes, and so on, that make individuals more susceptible to infective diseases. Therefore, it is arguable that the COVID-19 pandemic may be the first of many other global health crises that could be further exacerbated by progressively weakened immune systems.

The following are available online at https://www.mdpi.com/2304-8158/9/8/1036/s1, Table S1. List of the current clinical trials related to food (micronutrients, foods/diets, and other supplements) used for the prevention/treatment of COVID-19 with NTC identifier number, study name, treatment, aim, number of participants, study responsible, phase, and start and estimated completion dates. 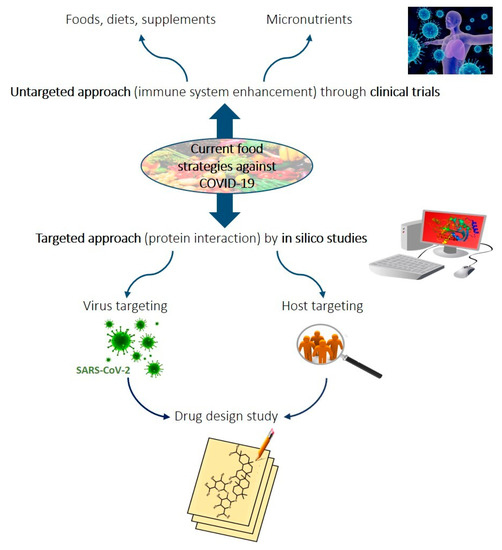 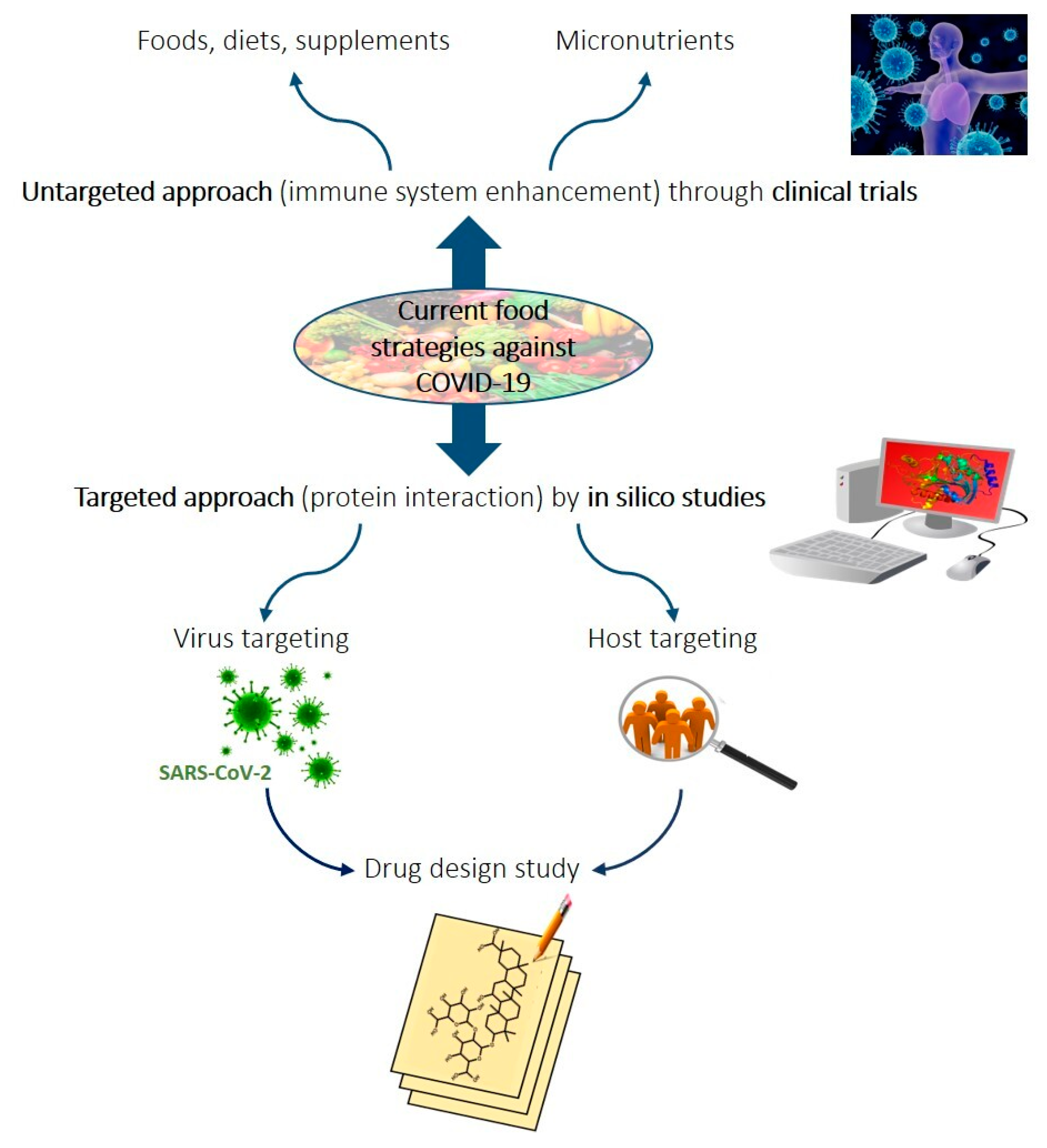