Is the Technological Quality of Old Durum Wheat Cultivars Superior to That of Modern Ones When Exposed to Moderately High Temperatures during Grain Filling?
Previous Article in Special Issue

The oil from thraustochytrids, unicellular heterotrophic marine protists, is increasingly used in the food and biotechnological industries as it is rich in omega-3 fatty acids, squalene and a broad spectrum of carotenoids. This study showed that the oilcake, a by-product of oil extraction, is equally valuable as it contained 38% protein/dry mass, and thraustochytrid protein isolate can be obtained with 92% protein content and recovered with 70% efficiency. The highest and lowest solubilities of proteins were observed at pH 12.0 and 4.0, respectively, the latter being its isoelectric point. Aspartic acid, glutamic acid, histidine, and arginine were the most abundant amino acids in proteins. The arginine-to-lysine ratio was higher than one, which is desired in heart-healthy foods. The denaturation temperature of proteins ranged from 167.8–174.5 °C, indicating its high thermal stability. Proteins also showed high emulsion activity (784.1 m2/g) and emulsion stability (209.9 min) indices. The extracted omega-3-rich oil melted in the range of 30–34.6 °C and remained stable up to 163–213 °C. This study shows that thraustochytrids are not only a valuable source of omega 3-, squalene- and carotenoid-containing oils, but are also rich in high-value protein with characteristics similar to those from oilseeds. View Full-Text
Keywords: amino acids; emulsion; FTIR; protein secondary structure; proximate composition; surface hydrophobicity; thermal properties amino acids; emulsion; FTIR; protein secondary structure; proximate composition; surface hydrophobicity; thermal properties
►▼ Show Figures 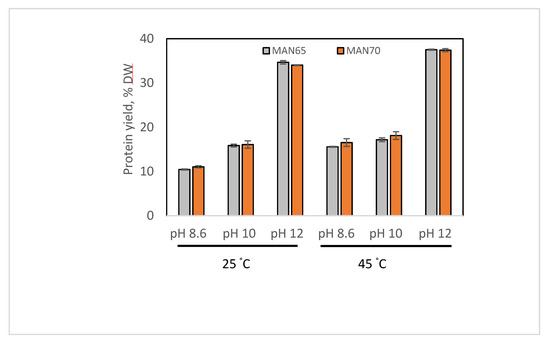