The aim of the research was to verify the necessity of secondary fixation with osmium tetroxide in various types of meat products and evaluation of structural changes of products using different fixation procedures. The material for the study consisted of 11 types of meat products that were analyzed using a scanning electron microscope (SEM) with two different methods of chemical fixation. The first method included the usual processing of biological samples: glutaraldehyde primary fixation, the use of a buffer, secondary fixation by osmium tetroxide (OsO4), buffer, and dehydration using ethanol of increasing concentrations. The second method comprised the glutaraldehyde primary fixation and dehydration using the ethanol of increasing concentrations only. The results unambiguously suggest that the main difference between these methods is in fixation and visibility of fat. Our analysis principally suggests that fixation of the product with OsO4 allows the tracking of all components (fat droplets, muscle fibers, connective tissue) in meat products. At the same time, our results also support the possibility that the secondary fixation can be skipped during the analysis, where the main objection is an observation of lipid-free structures of the meat products (e.g., connection between muscle and starches or spices) or meat products with an insignificant amount of fat.
Keywords: osmium tetroxide; scanning electron microscopy; lipid droplets; artifacts; meat osmium tetroxide; scanning electron microscopy; lipid droplets; artifacts; meat

Meat and meat products are broadly consumed in the Czech Republic. In 2017, the consumption of meat and meat products was 80.3 kg per person, and in the year 2018, this number slightly increased [1] which is well above the EU average consumption—64.8 kg per person [2] and more than double the consumption compared to the world—30.6 kg [3].
The Czech legislation comprises Decree No. 69/2016 Coll. on requirements for meat, meat products, fishery and aquaculture products, and products thereof, eggs and products thereof, which apart from the basic definitions, composition and sensory requirements, divides meat products into two main groups—meat products and semi-finished meat products. The meat products are further divided in seven subgroups: heat-treated, non-heat treated, non-heat treated for heat processing, long-life heat-treated, long-life fermented, cans, and semi-preserves [4].
The fact that meat products are widely popular in the Czech Republic plays into the hands of some of the producers, who make efforts to exchange more expensive components for cheaper substitutes. This kind of tampering can be fought by knowing the structures of the individual components, the way they are connected to each other in a product or by knowing the structure of the whole product. The structure of a product can be studied using both the light and electron microscopy. The indisputable advantage of the scanning electron microscopy (SEM) is its ability to show the surface of a product [5] and its microstructure in a 3D imaging [6]. Not only does it give us the idea about individual components, but also the connection between them. Such facts may help us when proving product tampering when studying the behavior of the individual components of a product during technological processing or with the development of new additives.
To be able to study the structure of meat products using SEM, they must be prepared as every other biological sample—by fixation [7]. Fixation aims to maintain the sample as close to the native state as possible [8]. On the other hand, every step may lead to damage to the final sample, for example, by changing the volume of the sample [9,10] or by the osmotic pressure effect on the cells [11]. That is why the goal is to adjust fixation to the given sample so that it includes the least steps while providing a sufficient fixation [12]. The common procedure of fixation of biological samples includes primary and secondary fixation, dehydration in ethanol of increasing concentrations, and drying [13]. The primary fixation is carried out using glutaraldehyde or formaldehyde. These aldehydes stabilize all components of cell membranes, especially proteins [14]. However, glutaraldehyde reacts poorly with lipids. Therefore, it is good to add a secondary fixation using osmium tetroxide, which stabilizes especially lipids. However, during the long-term exposition, the osmium tetroxide may damage the proteins that are already fixated and other components of the membranes. Therefore, fixation with OsO4 is recommended only when necessary [15].
Our study aimed to verify the necessity of secondary fixation with osmium tetroxide in various types of meat products and to assess structural changes in the products when using different methods of fixation.

The selection of samples obeyed Decree No. 69/2016 Coll. [4], on requirements for meat, meat products, fishery and aquaculture products, and products thereof, eggs, and products thereof. The decree categorizes meat products into 7 groups. The semi-finished processed meats are a standalone group. Two products were selected from each group of meat products, except semi-preserves for which we only found one product. The following products were analyzed: heat-treated—English bacon, Orava bacon; non-heat treated—“Čajovka”, “Métský” salami; long-life heat-treated—“Vysočina”, “Tourist” salami; long-life fermented—“Dunajská” sausage, “Poličan”; cans—Játrovka”, “Matěj”; semi-preserves—Moravian sausage mix.
Samples of the selected meat products were obtained from a chain of markets. The bought products were adjusted to the appropriate size (1 cm × 1 cm × 0.5 cm). Four samples were randomly selected from each product for each procedure, following the regulations for sample harvesting according to Decree No. 231/2106 Coll. [16]. The samples were subsequently processed using various methods, see Table 1. Further processing was the same for all samples regardless of the different types of chemical fixation. The samples were dried using the CPD method (critical point drying) using the Emitech K850 device (Quorum Technologies, Laughton, United Kingdom). The next step consisted of sticking the samples to metal plates using double-sided adhesive tape and followed by coating with a 10 nm layer of gold using the sputter coater device Q150R ES (Quorum Technologies, Laughton, United Kingdom). The resulting pictures were taken by the scanning electron microscope MIRA3 (Tescan, as., Brno, Czech Republic), under adequate conditions (Figure 1).

In summary, in this paper, we analyzed 11 meat products that were made in the Czech Republic. Our findings principally suggest that heat non treated meat products are not suitable for processing using SEM, presumably due to their paste-like structures. Second, our analysis supports that the main difference between the two fixation procedures was the presence of visible fat, which leads the authors to the conclusion that the secondary fixation using OsO4 affects the fixation of lipids in the product. Furthermore, our findings also support that the secondary fixation can be skipped if the objective is to observe lipid-free structures of the meat products (e.g., connection between muscle and starches or spices) or meat products with an insignificant amount of fat. Another aspect is that, with the exclusion of secondary fixation, there is no necessity for the use of highly toxic OsO4.

Conceptualization, H.B.; Resources, H.B.; Supervision, B.T. and M.P.; Visualization, L.K.; Writing—original draft, H.B.; Writing—review and editing, D.D. All authors have read and agreed to the published version of the manuscript.

Funded by the Ministry of Education of the Czech Republic: institutional program for public faculties.

Page: 10The authors declare no conflict of interest. 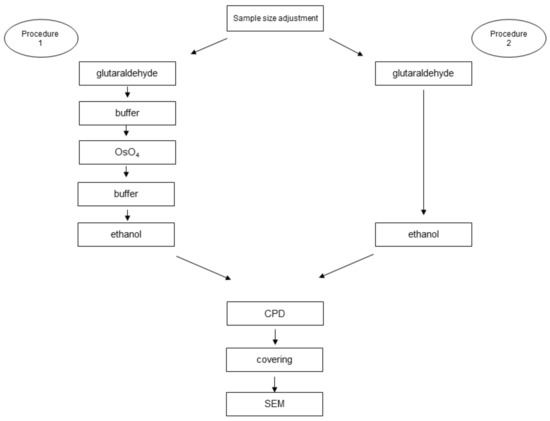 Table 2. Evaluation of the findings.
Table 2. Evaluation of the findings.
* Procedure 1: glutaraldehyde–cacodylate buffer–osmium tetroxide–cacodylate buffer–ethanol. ** Procedure 2: glutaraldehyde–ethanol. ✓: the visible findings; x: not visible findings; +/++/+++: quantitative findings. LAB—lactic acid bacteria.
© 2020 by the authors. Licensee MDPI, Basel, Switzerland. This article is an open access article distributed under the terms and conditions of the Creative Commons Attribution (CC BY) license (http://creativecommons.org/licenses/by/4.0/).
We use cookies on our website to ensure you get the best experience. Read more about our cookies here.
Accept
We have just recently launched a new version of our website. Help us to further improve by taking part in this short 5 minute survey here. here.
Never show this again