Characterization of Andean Blueberry in Bioactive Compounds, Evaluation of Biological Properties, and In Vitro Bioaccessibility
Previous Article in Journal

Vitamin D Intake in a Population-Based Sample of Young Polish Women, Its Major Sources and the Possibility of Meeting the Recommendations

The recommendations of vitamin D intake are commonly not met, which results from the fact that fish, being its major sources, are commonly rarely consumed. Consequently, a reliable estimation of its habitual intake is also difficult, as its daily intake is highly variable. The aim of the study was to analyze vitamin D intake from food, its major sources and the possibility to meet its recommendations in a population-based sample of young Polish women. The study was conducted in a sample of Polish women aged 15–30 years, recruited in cooperation with local students’ and youth organizations from all regions of Poland (convenience sampling with the snowball effect), while the stratified sampling procedure was applied with a random quota sampling for voivodeships (an administrative subdivision), to obtain an adequate distribution regarding the general population of young Polish women (n = 1,032). The vitamin D intake was assessed while using the validated Vitamin D Estimation Only—Food Frequency Questionnaire (VIDEO-FFQ) and was compared with the recommended 10 µg. The median vitamin D intake in the study group was 3.09 µg (0.00–24.52 µg) and in 95% of participants was lower than recommended, while the highest vitamin D intake was observed for the following sources: eggs (0.50 µg), meat and meat products (0.49 µg), herring, sardine and tuna products (0.41 µg) and dairy products (0.40 µg). The correlation between total vitamin D intake and its intake from its sources was strongest for eggs (p < 0.0001; R = 0.5989) and for herring, sardine and tuna products (p < 0.0001; R = 0.5314), while the correlation between total vitamin D intake and the number of servings was strongest for herring, sardine and tuna products (p < 0.0001; R = 0.5314). At the same time, while compared with other fish species, consuming herring was the strongest predictor of meeting the recommended vitamin D level of 10 µg (p = 0.0292; odds ratio (OR) = 1.94; 95% confidence interval (CI) 1.07–3.52), but also of 5 µg (p < 0.0001; OR = 2.54; 95% CI 1.85–3.47). Therefore, taking into account the relatively low prices of herring, its high vitamin D content, as well as its influence on total vitamin D intake, it could be beneficial to recommend young women to increase herring intake in order to increase dietary vitamin D intake and to meet its recommendations.
Keywords: vitamin D; intake; sources; diet; fish; fish products; species; young women; Poland vitamin D; intake; sources; diet; fish; fish products; species; young women; Poland

The study was conducted according to the Guidelines of the Declaration of Helsinki. All the participants provided their informed consent. The study procedure was accepted by the Bioethical Commission of the National Food and Nutrition Institute in Warsaw (No. 0701/2015).

The presented study was conducted in a group of young women living in all regions of Poland. The inclusion criteria were as follows: women, 15–30 years of age and who provided an informed consent to participate in the study. The exclusion criteria were as follows: currently not living in Poland and any missing or unreliable data. There were no additional inclusion/exclusion criteria associated with health or the followed diet, as the aim was to obtain a various sample, as representative for the general population of young Polish females as possible.
The study group was recruited in two stages of the sampling procedure in order to obtain a population-based sample with an adequate respondents’ distribution within the regions and voivodeships (an administrative subdivision) of Poland. Due to this fact, the recruitment was conducted in cooperation with local students’ organizations and youth organizations from all regions of Poland. Students from the organizations were contacted using social media of their organizations and, after receiving an authorization, a link to access the questionnaire with the information about the study (its aim, purpose, methodology, studied group) was posted in each students’ group separately. All members of the groups had the possibility to fill in the questionnaire. However, after answering the questions about the inclusion criteria (gender, age, living in Poland—while the specific voivodeship was to be indicated), it was verified if they met them and if not, the questionnaire was automatically closed down and they were not able to participate in the study. In that stage of the sampling, the participants were recruited using convenience sampling with the snowball effect. Afterwards, in the second stage of the sampling, a stratified sampling procedure was conducted with a random quota sampling for voivodeships—from all the respondents that had completed the questionnaire, a proportional number of respondents was randomly chosen to obtain the final sample characterized by an adequate distribution regarding the general population of young Polish women. The random quota sampling was conducted for the individuals who had met the inclusion criteria and provided a complete form without any missing or unreliable data.
The study group consisted of 1,032 women aged 15–30 years living in all voivodeships in Poland. The sampling procedure is presented in Figure 1.

The data were gathered while using the CAWI (computer-assisted web interview) method and the interview was conducted for all respondents willing to participate in the study that have met the inclusion criteria (before the stratified sampling procedure).
In Poland, fish intake may depend on the season, so in order to reduce bias (associated with the fact that fish intake may significantly influence vitamin D supply), the study was conducted in the same period in all the regions of Poland. The period of 11 September–10 November was chosen as a typical time of the year, due to the fact that in Poland an increased fish intake may be observed in July and August (the time of summer holidays, which is frequently spent by many at the seaside), as well as in December (Christmas) and spring months (Lent)—due to the consumption of traditional dishes containing fish.
The developed questionnaire included questions that were necessary to verify the inclusion and exclusion criteria, namely questions about: gender (close-ended single-choice question), age (open-ended question), and living in Poland, while the specific voivodeship was to be indicated (close-ended single-choice question). At the same time, the form to express the informed consent to participate with the personal data protection information was generated and, if confirmed, the main part of the questionnaire was to be completed.
The main part of the questionnaire was based on the brief FFQ to assess vitamin D intake from food that was previously validated in a group of Polish young women (Vitamin D Estimation Only—Food Frequency Questionnaire (VIDEO-FFQ)) [47]. This is a quick and convenient tool of high validity and reproducibility, which was observed for the Polish [47] and Croatian [48] population, which enables assessing vitamin D intake from food in large populations. To date, it has been used to assess vitamin D intake in various studies [49,50] and is included in the Register of Validated Short Dietary Assessment Instruments by the National Institutes of Health (NIH)—National Cancer Institute of United States of America [51].
The applied VIDEO-FFQ questionnaire [47] included questions about the intake of specified food products during the previous year, independent of season, while respondents were asked to specify the number of servings per month, week or day, depending on the product (open-ended questions). The food products within the questionnaire were clustered in groups based on the characteristics of the products and on vitamin D content. For each product the serving size was defined in grams and using typical household measures. Respondents were to specify the amount of products consumed and those added to dishes, while they were allowed to indicate the number of servings not only as integers, but also as decimal parts of servings.
To gather the data the VIDEO-FFQ was applied while using the CAWI method. Respondents had to complete the questionnaire question by question, and therefore to reduce the risk of bias associated with the previously indicated answers, the order of 2 questions was changed while compared with the original form (intake of fresh or smoked fish and of fish products) in order to ask first about the intake of fish products and only then about the intake of fresh and smoked fish. The reason for that was to minimize the risk of overestimation of fresh and smoked fish intake due to the fact that one of the listed fish species there was herring, which is usually eaten in Poland in the form of fish products (such as marinated in vinegar, oil or cream) and not fresh or smoked fish, and could have been mistakenly declared first of all in the fresh and smoked fish question, and then (again) in the fish products questions.
The additional questions, which are included in the VIDEO-FFQ questionnaire [47], about fish species and fish products (out of those listed) which are consumed by the respondents most frequently, were also asked.
Based on the data gathered, the habitual daily vitamin D intake from food was calculated for each respondent while using the formulas developed for the VIDEO-FFQ questionnaire, based on the Polish food composition tables, as described by Głąbska et al. [47], which allow the calculation of the total dietary intake, as well as the intake from specific groups of products, such as: salmon, rainbow trout, herring, eel (group of fish with the highest vitamin D content); halibut, mackerel, brook trout, sole, tuna (group of fish with a medium vitamin D content); cod, flounder, plaice, pollock, hake (group of fish with the lowest vitamin D content); herring, sardine and tuna products (fish products with higher vitamin D content); other fish products (fish products with lower vitamin D content); dairy products; eggs; meat and meat products; cereals and fats.
In order to compare the obtained data to the vitamin D intake recommendations the cut-off point of 10 µg was chosen, as recommended by the American Institute of Medicine Committee as the EAR value [27], by the UK Scientific Advisory Committee on Nutrition [22] and recommended in the Nordic Recommendations [23].

The distribution of the obtained data was verified using the Shapiro–Wilk test. Due to the stated non-parametric distributions, the Spearman rank correlation coefficient was applied to analyze the correlations and the Mann–Whitney U-test to compare the sub-groups. The analysis of the logistic regression was conducted while the association between consuming specific fish species and meeting the recommended vitamin D intake for the levels of 5 µg (recommended in Poland while the study was conducted [52]) and 10 µg (recommended by the major international authorities [22,23,27]) was verified. The binomial logistic regression was conducted with the target variable of meeting/not meeting the recommended vitamin D intake.
The accepted level of significance was p ≤ 0.05. The correlation coefficients were interpreted while using the classification by Hinkle et al. [53]. The following software was used: Statistica 8.0 (Statsoft Inc., Tulsa, OK, USA), Statgraphics Plus for Windows 4.0 (Statgraphics Technologies Inc., The Plains, VA, USA).

This research was funded by the Polish Ministry of Science and Higher Education within funds of Institute of Human Nutrition Sciences, Warsaw University of Life Sciences (WULS), for scientific research. 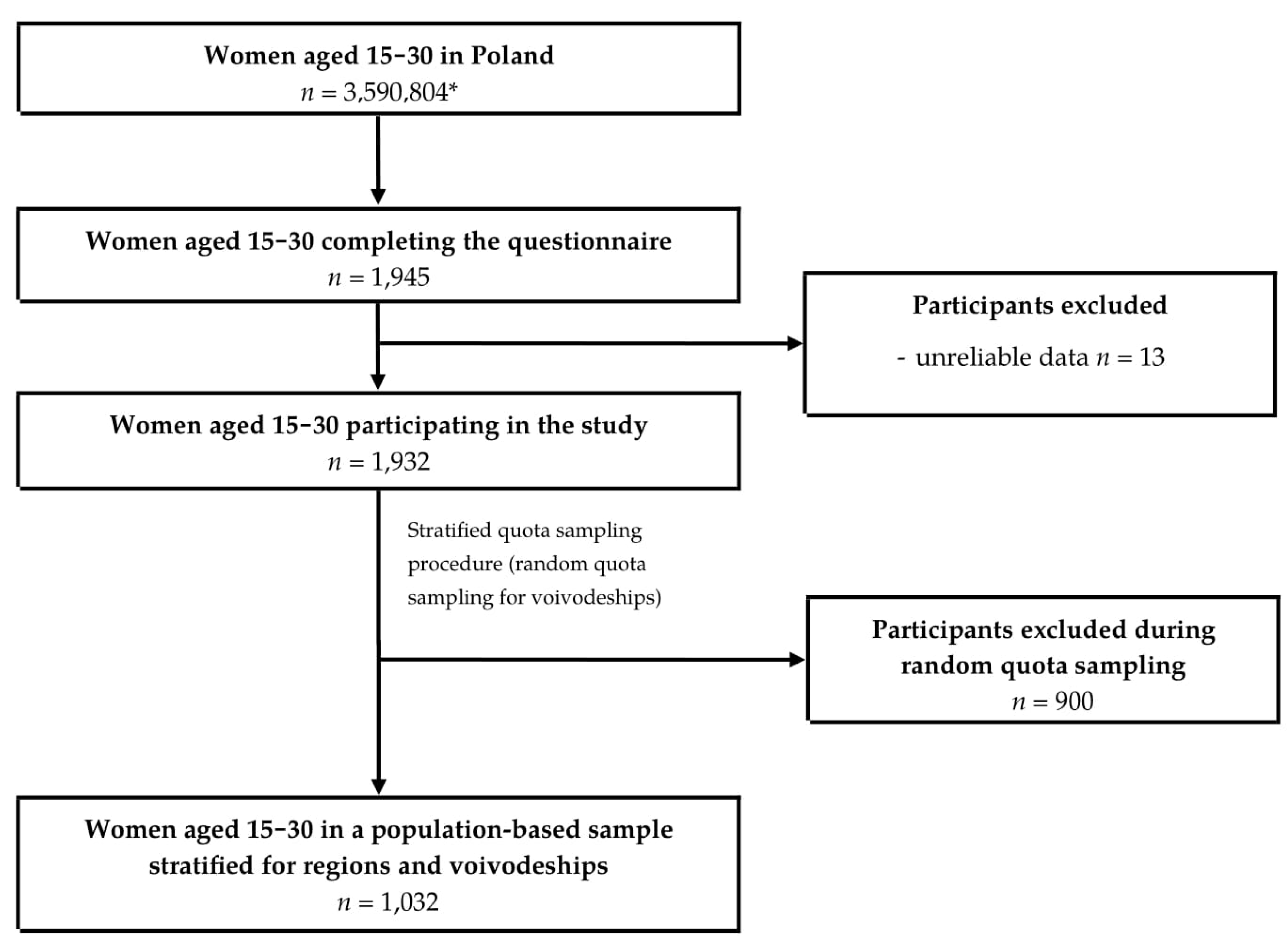