The aim of this article is to develop a method for determining the dose of radiation in the processing of chilled fish and its effect on the antioxidant activity and thermophysical characteristics of muscle tissue. Radiation processing of chilled fish was performed using a linear electron accelerator model LEA-10-10S2. The dose of radiation was determined by the method of electron-paramagnetic resonance. After being treated with ionizing radiation, the cooled fish meets the requirements of the technical regulations of TR TU 021/2011 “On food safety” and TR EAEU 040/2016 “On the safety of fish and fish products”. As a result of our research, a correlation was established between the area of the Electron Paramagnetic Resonance (EPR) signal and the absorbed dose of the radiation dose. We proved a decrease in the antioxidant activity of muscle tissue of fish with an increase in radiation dose. It is established that radiation treatment of chilled fish affects the thermophysical properties of muscle tissue.
Keywords: fish; EPR spectrum; thermophysical properties fish; EPR spectrum; thermophysical properties

Defrosted fish is a perishable food product and its shelf life is determined by the development of microorganisms, the action of tissue enzymes and the resistance of fat to oxidative deterioration. Thus, defrosted fish is characterized by high microbial contamination (up to 102–104 bacteria per 1 cm² of surface) due to the penetration of microorganisms from the gastrointestinal tract into muscle tissue with favorable conditions for the development of microflora, in particular, with a high value of 6.3–6.6 pH and water activity [1]. Fermentation such as, for example, bacterial deaminase leads to the breakdown of fish protein into free amino acids and their further autolysis with the formation of decomposition products, which worsen the organoleptic characteristics of the product. Fish contains easily digestible fats with a high content of polyunsaturated fatty acids, but at the same time, the presence of fatty acids in fish causes the rapid development of oxidative damage.
It should be noted, that thermophysical characteristics play some role for the conservation of freshly caught fish, i.e., the ability to conduct and accumulate heat/cold. The thermophysical properties of fish muscle tissue depend on its chemical composition, muscle tissue density, etc.
Thus, taking into account all the named factors that have a negative effect on fish shelf life, the development of methods for increasing fish shelf life is one of the promising areas of research in storage technology.
A promising physical way to increase the shelf life of defrosted fish is to treat it with ionizing radiation. According to GOST 34154-2017 “Standard guide for irradiation of fish and aquatic invertebrates used as food to control pathogens and spoilage microorganisms”, the use of radiation storage technologies ensures the microbiological safety of fish.
According to the assumptions, the market of irradiated raw food materials and food products may reach $ 4.8 billion by year 2020 and up to $ 10.9 billion by year 2030. At the same time, up to 70% of food irradiation centers are located in the USA and China [2].
The use of ionizing radiation contributes to the destruction of parasitic protozoa and worms that are dangerous to human health, and of microorganisms that cause food spoilage [3].
It was proved that the treatment of fish fillets with doses of gamma-radiation from 1 kGy to 4 kGy is more effective compared to the traditional methods of preservation due to the destruction of pathogenic and conditionally pathogenic microflora. It was established that radiation dose of 3 kGy is sufficient to destroy S. aureus and E. coli; at radiation dose of 4 kGy Listeria monocytogenes is destroyed without changing the physicochemical properties of the fish [4]. The use of gamma radiation and X-rays in order to destroy pathogenic strains of bacteria, such as vibriosin particular, in raw food fish materials is an alternative to heat treatment [5].
However, radiation treatment to high doses (over 4.5 kGy) can lead to the development of oxidative damage of fish; to the reduction of concentration of fatty acids; and to the increased synthesis of thiobarbituricacid and, as a result, it can lead to the formation of radiolysis products and the destruction of thiamine (B1) while maintaining riboflavin (B2) [6,7,8].
Codex Alimentarius has established a maximum dose of absorbed radiation of up to 10 kGy. At the same time, in the countries of America (USA, Canada, Brazil), the maximum permissible dose for processing fish products is 2.2 kGy, in the EU countries (England, France, The Netherlands)—3.0 kGy [9].
At the same time, there is a number of unresolved issues that remain in the technology of processing and defrosted fish with ionizing radiation: technological parameters of processing ionizing radiation of fish are not established to ensure high quality characteristics during storage, including preserving its antioxidant activity and preventing the development of enzymatic and oxidative damage; the effect of ionizing radiation on the thermal conductivity of irradiated defrosted fish has not been studied, there are no regulations that can be used to identify irradiated fish products.
In this regard, the aim of the present work is to develop a method for determining the dose of ionizing radiation during the processing of defrosted fish and its effect on the antioxidant activity and the thermophysical characteristics of muscle tissue. 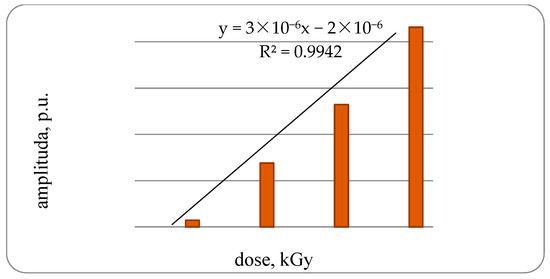 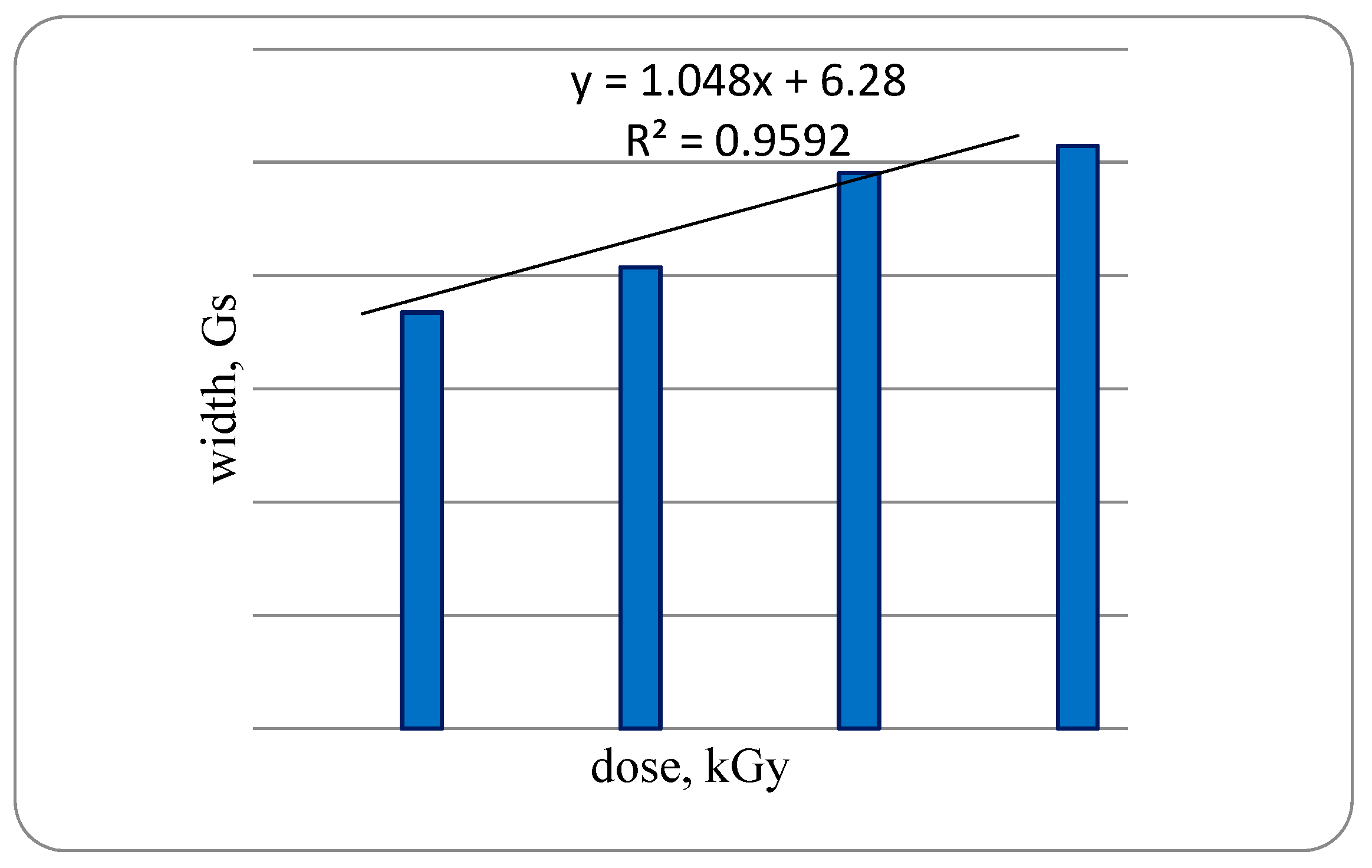 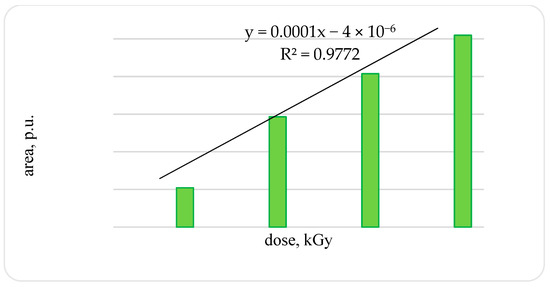 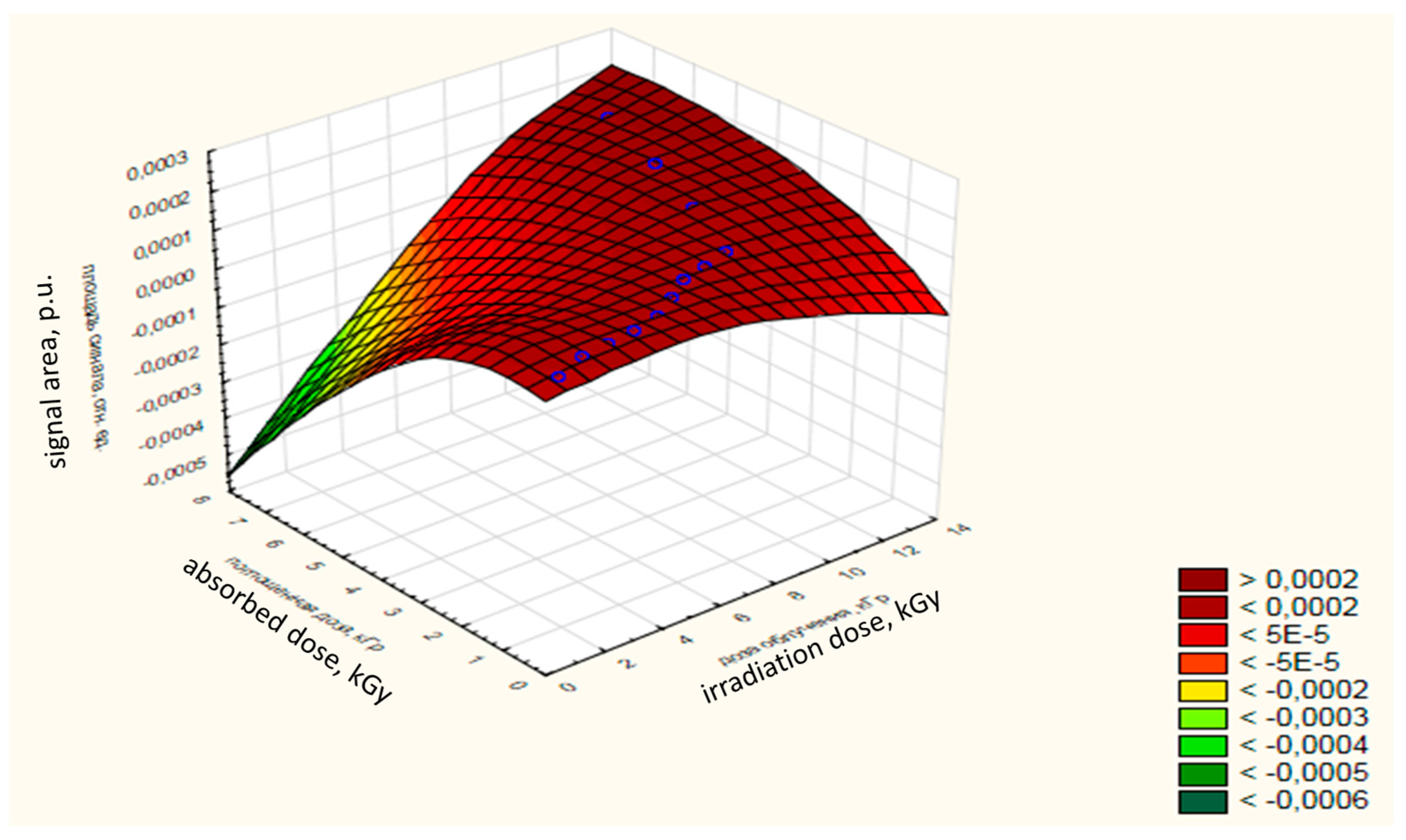 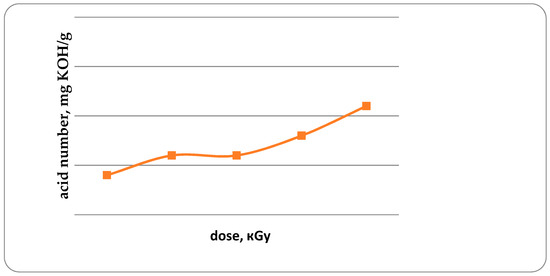 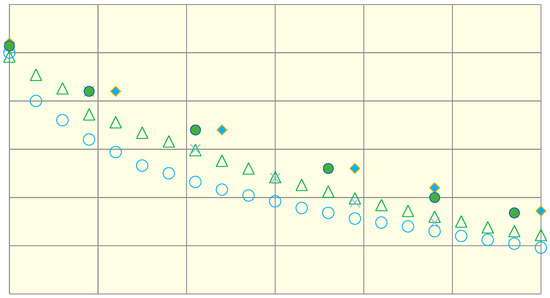