What Is “Natural”? Consumer Responses to Selected Ingredients

What Temperature of Coffee Exceeds the Pain Threshold? Pilot Study of a Sensory Analysis Method as Basis for Cancer Risk Assessment

:
The International Agency for Research on Cancer (IARC) evaluates “very hot (>65 °C) beverages” as probably carcinogenic to humans. However, there is a lack of research regarding what temperatures consumers actually perceive as “very hot” or as “too hot”. A method for sensory analysis of such threshold temperatures was developed. The participants were asked to mix a very hot coffee step by step into a cooler coffee. Because of that, the coffee to be tasted was incrementally increased in temperature during the test. The participants took a sip at every addition, until they perceive the beverage as too hot for consumption. The protocol was evaluated in the form of a pilot study using 87 participants. Interestingly, the average pain threshold of the test group (67 °C) and the preferred drinking temperature (63 °C) iterated around the IARC threshold for carcinogenicity. The developed methodology was found as fit for the purpose and may be applied in larger studies.
Keywords:
coffee; hot beverages; temperature; esophageal cancer; thermosensing; sensory thresholds; methodological study 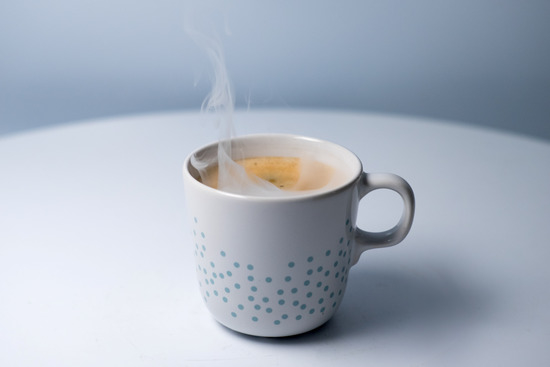 The mixing method according to Lee and O’Mahony [23] is used with some modifications. In contrast to the reduction of temperature in the original protocol, the coffee temperature is gradually increased by adding very hot coffee until the participants perceive the drink as being too hot. In each step, the participants re-test the hot drink after a temperature increase of 2–3 °C.
The experimental setup is shown in Figure 1. Each participant receives a cup of cold water, a cup as spittoon, a thermometer (Testo 108, Testo, Lenzkirch, Germany), a beaker, a thermos flask with very hot coffee (Instant coffee, Brand “Gut und Günstig”, Edeka, Hamburg, Germany) and an isolation cup (Styrofoam cup, 400 mL Thermo Cup EPS Neutral, white, Gastro-Sun.de, Blankenhain, Germany) with the “colder” coffee.
Before the start of the study, the participants are trained through a short briefing so that all of them have understood the test procedure and any questions that may arise can be clarified before the start of the test. The test sheet (Figure A1 and Figure A2, Appendix A), which is given to the participant to be filled in during the test run, also contains the test instructions. Then it contains a table, in which the temperatures of the tasted coffees are entered. For each tasted temperature of the hot drink, the participants give a judgement about the taste sensation using a three-category scale (with the word descriptors: too cold, optimal, or too hot) and may make a brief remark in their own words. Finally, the participants indicate how often they usually ingest hot drinks.
The coffee is prepared each time with the same amount of tap water (200 mL) and soluble coffee powder (4.5 g). To ensure a similar starting temperature for all participants, a pot of coffee is prepared 15 min before they arrive. This coffee is cooled down to the desired temperature using a thermostatted water bath with temperature control. The desired starting temperature for all participants is 60 °C.
The very hot coffee, however, is poured only shortly before the start of the experiment to ensure its high temperature. In order to be able to hinder the rapid cooling of the coffee, tests are carried out with a cup holder made of foam (Florence foam holder for 12 glasses/cups, 330 × 245 × 60 mm, Haba BV, Maasland, The Netherlands). With the help of the foam, the cups are isolated and thus delay the cooling. In order to minimize the cooling of the coffee in the thermos flasks as well, they are preheated before the experiments by adding boiling hot water. The water is removed from the thermos flasks shortly before the test persons arrive. By using a water dispenser (Bunn H3EA Hot Water Dispenser, Bunn, Springfield, IL, USA) for the preparation of the “very hot” coffee, constant temperatures of about 96 °C can be achieved. This coffee is prepared only after the brief introduction of the participants to keep these temperatures as long as possible.
The participants gradually mix in the test phase in an ascending fashion very hot coffee (about 96 °C) to the colder coffee (starting temperature 60 °C, 150 mL) and measure the temperature of the mixture. The added amount is standardized by a small beaker (0.04 L), which leads to a temperature increase of 2–3 °C. Then the coffee is sampled. The process of mixing is repeated by the participants until their personal optimum drinking temperature is reached, followed by the temperature, which is perceived as unpleasant, painful or too hot at which the trial is stopped. The duration of the trial is about 15–25 min.
For a pilot feasibility test of the study protocol, all students, staff and professors of the Albstadt-Sigmaringen University were invited by e-mail to participate. A total of 87 Caucasian people (65 female and 22 male; average age 33 ± 15) and thus about 5% of the university location Sigmaringen members participated in the study. The informed consent of the participants was obtained with signatures in writing following an oral information about the trial. The study protocol was approved by the ethics commission at Landesärztekammer Baden-Württemberg (Stuttgart, Germany) at 19 December 2017, Az. F-2017-094. Data was tested for normality using Shapiro–Wilk test and group comparisons were conducted using one-way analysis of variance (Minitab 16, Minitab Inc., State College, PA, USA). Statistical significance was assumed at the 0.05 significance level.

The developed method is well-suitable for the purpose to obtain temperature preferences of beverages and next steps could include intra- and inter-individual validation work and field testing with larger collectives of participants. After final validation, the method could be useful for testing temperature threshold differences in oesophageal cancer patients versus a control group.

J.D., G.W. and D.W.L. conceived and designed the experiments; J.D. performed the experiments; J.D. analysed the data; J.D. wrote the initial draft in the form of a Bachelor thesis; D.W.L. summarized the draft as a scientific paper and translated into English; G.W. revised the final draft; J.D., G.W. and D.W.L. revised and approved the final version.