The water aquifers of the regions of Asopos River in Viotia and Messapia in Evia (Greece) have been contaminated with hexavalent chromium (Cr (VI)) and bivalent nickel (Ni (II)). Given that these areas are the two biggest tuber producing regions of Greece, in our previous work, the cross-contamination of the food chain with these two heavy metals was quantified. In the present study, the potential of sunflower (Helianthus annuus) cultivation in these regions is evaluated. The scope of our study was to investigate the uptake of chromium and nickel by sunflower, in a greenhouse experiment. The study included two cultivation periods of plants in six irrigation lines with different levels of Cr (VI) and Ni (II) ranging from 0 μg/L (control) to 10,000 μg/L. In all plant parts, statistically significant increased levels of Cr (VI) and Ni (II) were found when compared to control ones. Also, a positive correlation, both for Cr and Ni, between levels of heavy metals in irrigation water and plants was observed. Following European Food Safety Authority recommendations, the obtained oil was evaluated as safe for consumption, therefore, sunflower cultivation could be a valid bioremediation solution for the Asopos and Messapia regions. View Full-Text
Keywords: chromium; nickel; sunflower; sunflower oil; metal uptake; water; safety chromium; nickel; sunflower; sunflower oil; metal uptake; water; safety
►▼ Show Figures 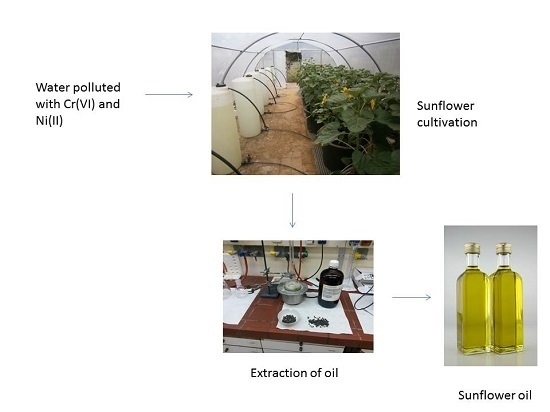