How Healthy Are Non-Traditional Dietary Proteins? The Effect of Diverse Protein Foods on Biomarkers of Human Health
Previous Article in Journal

Evaluation of Lactose Oxidase as an Enzyme-Based Antimicrobial for Control of L. monocytogenes in Fresh Cheese

Antibacterial Properties of TMA against Escherichia coli and Effect of Temperature and Storage Duration on TMA Content, Lysozyme Activity and Content in Eggs

Studies on trimethylamine (TMA) in egg yolk have focused on how it impacts the flavor of eggs, but there has been little focus on its other functions. We designed an in vitro antibacterial test of TMA according to TMA concentrations that covered the TMA contents typically found in egg yolk. The change in TMA content in yolk was analyzed at different storage temperatures and for different storage durations. The known antibacterial components of eggs, including the cuticle quality of the eggshell and the lysozyme activity and content in egg white, were also assessed. The total bacterial count (TBC) of different parts of eggs were detected. The results showed that the inhibitory effect of TMA on Escherichia coli (E. coli) growth increased with increasing TMA concentration, and the yolk TMA content significantly increased with storage duration (p < 0.05). The cuticle quality and lysozyme content and activity significantly decreased with storage time and increasing temperature, accompanied by a significant increase in the TBC on the eggshell surface and in the egg white (p < 0.05). This work reveals a new role for trace TMA in yolks because it reduces the risk of bacterial colonization, especially when the antibacterial function of eggs is gradually weakened during storage. View Full-Text
Keywords: TMA; lysozyme; cuticle; bacteriostasis TMA; lysozyme; cuticle; bacteriostasis
►▼ Show Figures 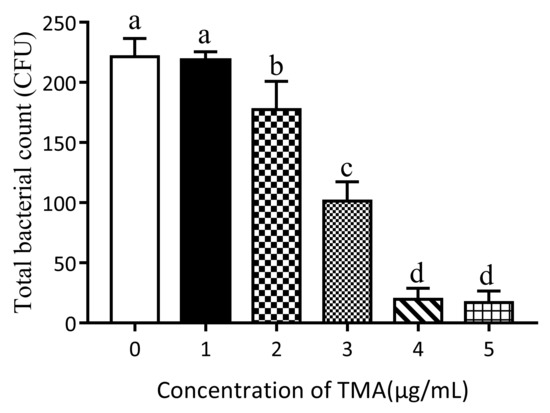