Cronobacter spp. are opportunistic pathogens of the Enterobacteriaceae family. The organism causes infections in all age groups, but the most serious cases occur in outbreaks related to neonates with meningitis and necrotizing enterocolitis. The objective was to determine the in silico and in vitro putative virulence factors of six Cronobacter sakazakii strains isolated from powdered milk (PM) in the Czech Republic. Strains were identified by MALDI-TOF MS and whole-genome sequencing (WGS). Virulence and resistance genes were detected with the Ridom SeqSphere+ software task template and the Comprehensive Antibiotic Resistance Database (CARD) platform. Adherence and invasion ability were performed using the mouse neuroblastoma (N1E-115 ATCCCRL-2263) cell line. The CRISPR-Cas system was searched with CRISPRCasFinder. Core genome MLST identified four different sequence types (ST1, ST145, ST245, and ST297) in six isolates. Strains 13755-1B and 1847 were able to adhere in 2.2 and 3.2 × 106 CFU/mL, while 0.00073% invasion frequency was detected only in strain 1847. Both strains 13755-1B and 1847 were positive for three (50.0%) and four virulence genes, respectively. The cpa gene was not detected. Twenty-eight genes were detected by WGS and grouped as flagellar or outer membrane proteins, chemotaxis, hemolysins, and invasion, plasminogen activator, colonization, transcriptional regulator, and survival in macrophages. The colistin-resistance-encoding mcr-9.1 and cephalothin-resis-encoding blaCSA genes and IncFII(pECLA) and IncFIB(pCTU3) plasmids were detected. All strains exhibited CRISPR matrices and four of them two type I-E and I-F matrices. Combined molecular methodologies improve Cronobacter spp. decision-making for health authorities to protect the population.
Keywords: Cronobacter sakazakii; whole-genome sequencing; powdered milk; virulence; antibiotic resistance genes; CRISPR-Cas Cronobacter sakazakii; whole-genome sequencing; powdered milk; virulence; antibiotic resistance genes; CRISPR-Cas

The Cronobacter genus was first defined by Iversen et al. [1] and further developed by Iversen et al. [2] and Joseph et al. [3] to include the C. sakazakii, C. malonaticus, C. universalis, C. turicensis, C. muytjensii, C. dublinensis, and C. condimenti species [3]. The population groups most affected by Cronobacter spp. are newborns and the elderly. Holý et al. [4] isolated Cronobacter spp. in 82 of 45,000 analyzed samples and found an incidence (×1000 samples) of 8.7, 8.2, and 4.8 in infants under 1 y of age, children between 1 and 4 y, and adults over 65, respectively. The fatality rates associated with general infection range from 42% to 80% and 15% to 25% for neonatal meningitis and septicemia, respectively [5]. The highest incidence and severity has occurred in infants, and a number of outbreaks in neonatal intensive care units have been reported [5,6]. Clinical symptoms in infants are primarily meningitis, septicemia, or necrotizing enteritis [7,8,9]. Other symptoms can include diarrhea and urinary tract infection.
Infections are often associated with the consumption of reconstituted powdered infant formula (RPIF) caused by either intrinsic contamination of powdered infant formula (PIF) or extrinsic contamination of preparation utensils and equipment [10]. Given that it is widespread, Cronobacter spp. can be isolated from PIF, powdered milk, infant cereals and other products, and water [11,12]. Controlling the organism during PIF production is important because Cronobacter spp. strains have been isolated up to 24 months after the PIF was packaged [13]. Studies of Cronobacter spp. incidence in PIF have shown an incidence ranging from 3% to 30% [14,15,16,17].
The antibiotic resistance profile of Cronobacter is important because the population group consuming PIF and infant products is immunologically vulnerable. Molloy et al. [18] reported that 51% of 33 C. sakazakii isolated strains were resistant to cephalothin. Carvalho et al. [19] indicated high resistance to cefazolin (94.4%) and low resistance to amoxicillin (9.45%), cefpodoxime (5.55%), streptomycin (1.35%), and trimethoprim/sulfamethoxazole (1.35%). An 80% resistance to cephalothin was reported in another study [20]. Fei et al. [21] found varying degrees of resistance to cefazolin and 100% resistance to amoxicillin-clavulanate, ampicillin, and cefazolin in 70 strains of C. sakazakii isolated from PIF and corresponding processing environments.
Many virulence traits have been identified in Cronobacter spp. [22,23], including the association with inositol fermentation [24], invasion and adherence in cellular lines such as HEp-2 and CaCo, the presence of endotoxins [25], detection of virulence genes cpa, hly, and sip [22,26], flagella [27], and the ompA and ompX genes [28]. In addition, there are other factors such as the use of sialic acid and the presence of a capsule [29]. Strains related to severe cases of meningitis are also associated with clonal complex 4 (CC4) [30]; therefore, it is suggested that not all C. sakazakii strains are equally virulent [6].
Molecular subtyping has long been considered as a useful tool in epidemiological surveillance to establish the similarity of bacteria colonizing a particular ecological habitat. Sub-typing of Cronobacter spp. has used pulsed-field gel electrophoresis (PFGE), multilocus sequence typing (MLST), and, recently, typing by CRISPR-Cas characterization systems [31]. This is possible because the matrices that constitute these systems can differ among closely related strains, since the genetic information acquired as a result of different exposures to phages and plasmids leads to variations in the repeated sequences and spacers that form them. Therefore, the CRISPR-cas profiles can show a better resolution compared with MLST and PFGE; for this reason, they are used to differentiate highly related strains such as Cronobacter spp. Recently, CRISPR-Cas typing was reported as a valuable tool when developing new methods for the early diagnosis of infectious diseases [32]. Whole-genome sequencing (WGS) is a modern tool for the genomic research of Cronobacter spp., and it can be used to expand the original 7-loci MLST scheme to 1836 loci of core genome MLST (cgMLST) [33]. The use of the MLST scheme for clinical, food, and environmental isolates has provided information that is relevant for Cronobacter spp. and its sources of isolation to analyze the severity of the clinical manifestation in several age groups [34].
The complete genome studies of pathogenic strains have greatly improved our knowledge about the virulence and antibiotic resistance genes [35]. This knowledge leads to an understanding of how pathogens survive by using various mechanisms to infect and elicit variable host disease responses. The aim of the present study was to perform a molecular characterization of six C. sakazakii strains isolated from powdered milk in the Czech Republic between 2010 and 2014 in order to identify their virulence potential and the possible presence of antibiotic resistance genes.

2.1. Strains Used in This Study

The DNA isolation, quantification, and preparation of sequence-ready libraries for whole-genome sequencing (WGS) were as indicated by Lepuschitz et al. [38]. The Sequencing Coverage Calculator (https://www.illumina.com) was used to calculate a desired mean coverage > fold-80.
Raw reads were de novo assembled with the SPAdes version 3.9.0 [39] and processed with the SeqSphere+ software version 5.1.0 (Ridom GmbH, GmbH, Münster, Germany). A gene-by-gene genome-wide comparison was performed for bacterial typing by the MLST+ task template function of SeqSphere+, as previously described [40], and the core genome multilocus sequence type (cgMLST) gene set was defined according to Lepuschitz et al. [38]. Based on the defined cgMLST scheme, isolates were visualized as a minimum spanning tree (MST) to identify genotypic relationships. Sequences of the seven housekeeping genes of the usual MLST scheme were extracted and queried against the Cronobacter MLST database and the sequence types (STs) in silico were determined [6].

The gene clusters of the gnd and galF loci are specific to the O-serotype region. They were identified by analyzing WGS sequences via the BIGSdb tools in the PubMLST database (http://pubmlst.org/cronobacter/) [31].

The mouse neuroblastoma (N1E-115 ATCC CRL-2263, Manassas, USA) cell line was used for the adherence assay. The N1E-115 cell line was cultured in Dulbecco’s Modified Eagle Medium (DMEM) with 4.5 g/L glucose (GIBCO, MA, USA). In addition, it was supplemented with 7% fetal bovine serum (FBS) (GIBCO, MA, USA) and differentiated in DMEM medium to which 2% FBS and 1.25% dimethyl sulfoxide was added for 5 d. The cells (1 × 105 cells/mL) were sown in 24-well plates (Corning Life Sciences, NY, USA) and infected at a multiplicity of infection100:1. All the studied isolates were previously cultured in Luria broth (LB). Infection was carried out at 37 °C for 4 h and 5% CO2. After incubation, the cells were washed with PBS 1× and the bacteria removed by adding 1 mL 0.1% Triton X-100 (Amresco, OH, USA). Afterward, serial dilutions were plated on LB to determine the colony-forming units (CFU) of bacteria adhering to the N1E-115 cell [22]. This assay was repeated twice and in duplicate; the data were expressed as the means plus the standard deviation of the assay results.

The conditioning of the monolayers of cell line N1E-115 and infection time were performed as previously described in Section 2.5. After a 4-h incubation, the infected monolayers were washed with PBS 1× and incubated with 1 mL DMEM with 300 µg/mL lysozyme (Sigma-Aldrich, MI, USA) and 100 µg/mL gentamicin (Sigma-Aldrich, MI, USA) at 37 °C for 2 h and 5% CO2. After incubation, cells were washed three times with PBS 1×, detached with 1 mL 0.1% Triton X-100, and plated on LB. Invasion frequencies were calculated as the number of bacteria surviving incubation with gentamicin and lysozyme divided by the total number of bacteria present when this antibiotic is not used (bacterial adherence) [22]. This assay was conducted twice and in duplicate; data were expressed as invasion frequency (%).

The existence of virulence genes was confirmed by the Task Template function in SeqSphere+ for WGS data included in the virulence factor database (http://www.mgc.ac.cn/VFs/). Thresholds for the target scan procedure were set at ≥ 90% to identify the reference sequence and ≥ 99% aligned to the reference sequence [38].
The presence of antimicrobial resistance genes was determined by the Comprehensive Antibiotic Resistance Database (CARD) with the “perfect” and “strict” default settings for sequence analysis [41] and Task Template AMRFinderPlus 3.2.3 available in the Ridom SeqSphere + 7.0 software using the EXACT method: 100% sequence match over 100% of the length of a protein in the database that is not a named allele. The BLAST alignment is >90% of length and >90% identified to a protein in the AMRFinderPlus database.

We used the PlasmidFinder 1.3 function to detect the plasmids [42], available from the Center for Genomic Epidemiology (http://www.genomicepidemiology.org/).

The search and characterization of the CRISPR matrices and the associated cas genes were determined with CRISPRCasFinder [43], which is available from the Institut de Biologie Intégrative de la Cellule and Université Paris-Saclay server (https://crisprcas.i2bc.paris-saclay.fr). The CRISPRDigger program was used to determine the type of CRISPR-Cas system [44].

We thank the Institute of Medical Microbiology and Hygiene AGES-Austrian Agency for Health and Food Safety for their support. 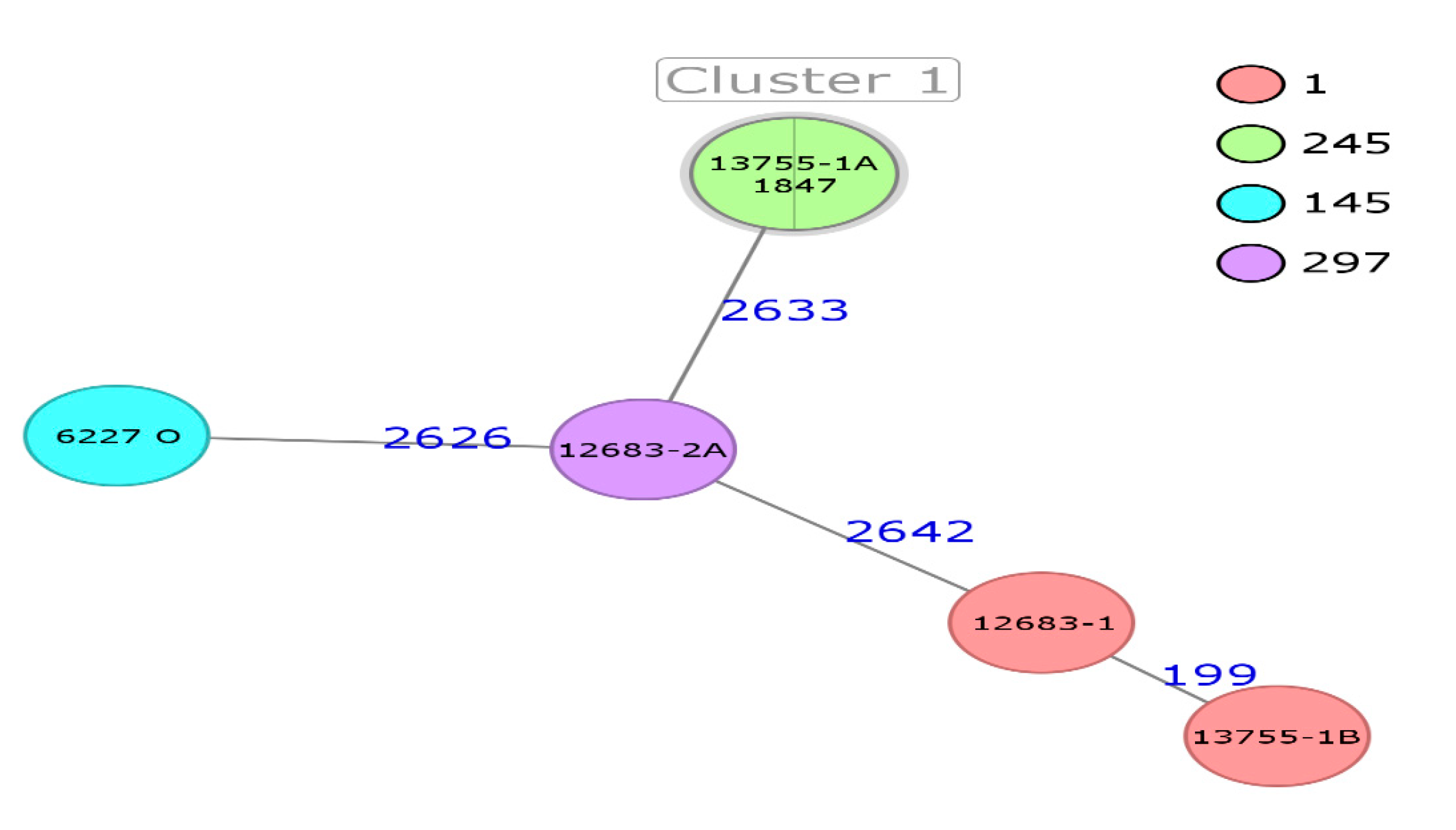 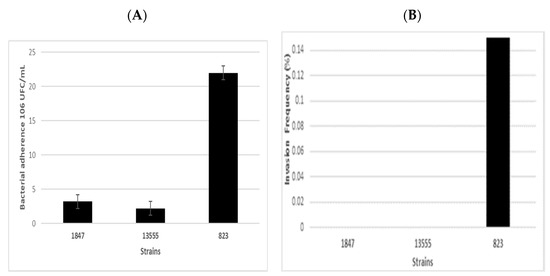 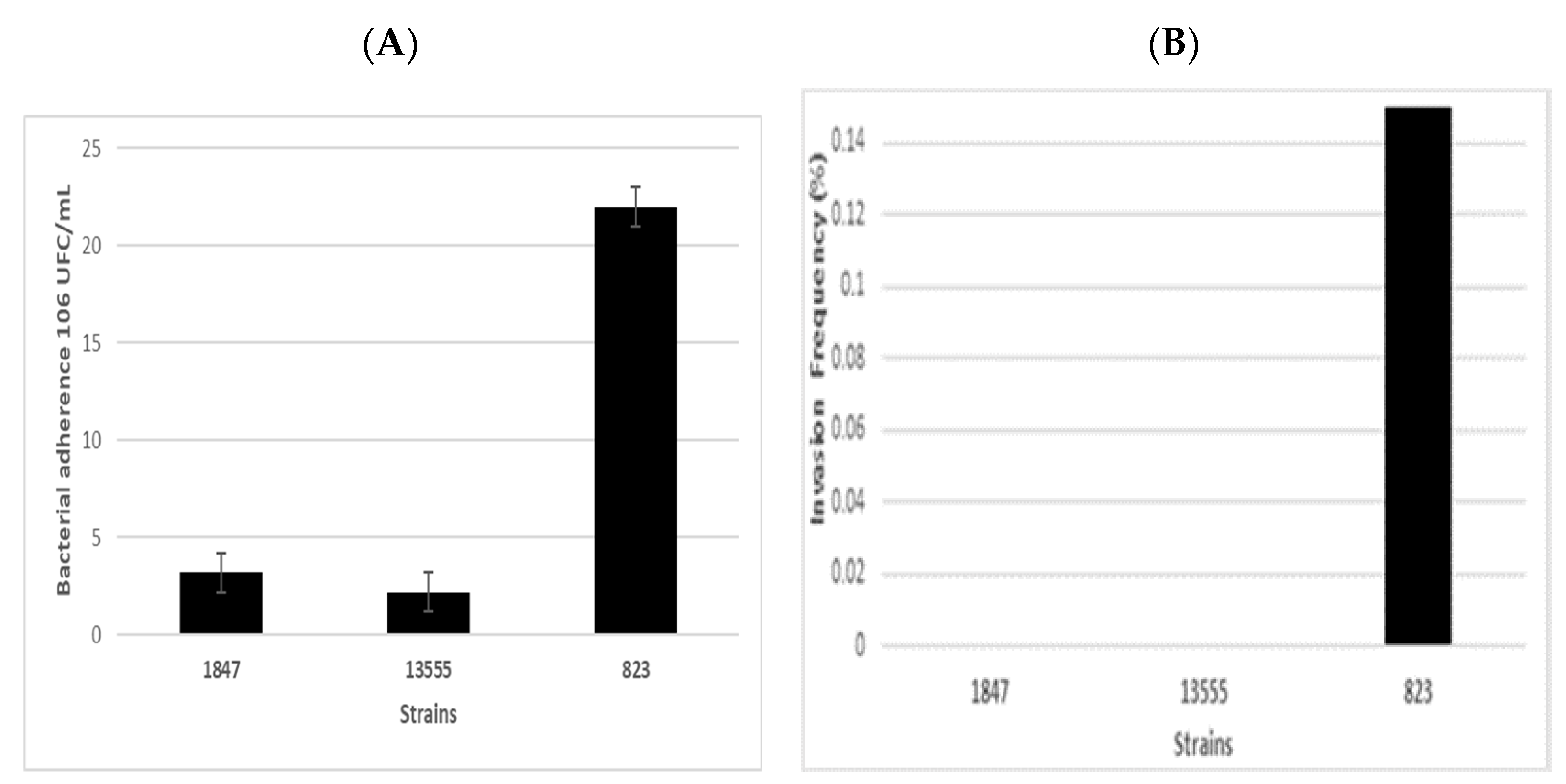