Root Fractures in the Primary Teeth and Their Management: A Scoping Review

Recently, a novel magnetic attachment with extremely low cost and high performance was developed. This article aims to introduce a novel magnetic attachment and to evaluate its basic eligibility for denture retention in clinical practice. The novel magnetic attachment system used in this study was the direct-bonding root-keeper-type Magteeth™ MT800 (MagneDesign, Nagoya, Japan). The retentive force without displacement (position 0) and after horizontal displacement to positions 0.5, 1, 1.5, 2, 2.5, and 3 mm were measured. The values relative to the retentive force without displacement were gradually decreased to 82.7 ± 16.3%, 68.8 ± 17.1%, 62.4 ± 15%, 47.2 ± 13.1%, 35.7 ± 9.9%, and 20.7 ± 6.5%, respectively. The retentive force and magnetic field strength did not change significantly after the load test (100 N load, 10,000 times). No new gap between the metal and resin was found in the root keeper- and magnet assembly-embedded blocks after the load test. Some scratches on magnetic assembly and root keeper surface, while no change in the resin texture after the load test were observed. Based on the findings of this preliminary study, this novel low-cost magnetic attachment exhibited favorable retention, strength, and durability for clinical use. View Full-Text
Keywords: dental magnet; overdenture; magnetic retention; denture retention; denture attachment dental magnet; overdenture; magnetic retention; denture retention; denture attachment
►▼ Show Figures 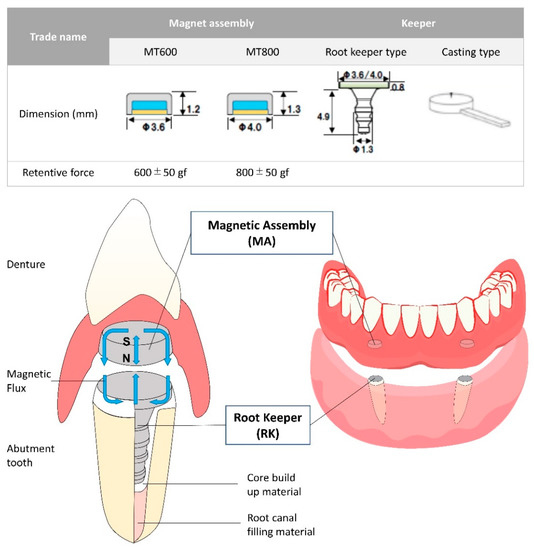