Frequency combs have had a tremendous impact in several domains since their demonstration in the early 2000s [1,2]. High-precision spectroscopy [3] and especially dual comb spectroscopy [4] have greatly benefited from the advancement of such sources. The extension of this concept to the different regions of the electromagnetic spectrum has often involved non-linear techniques starting from an ultrafast mode-locked laser operating in the visible or near-infrared. The understanding that sources with perfectly equidistant modes and a well-defined phase relation can be achieved even without ultrafast pulses opened the door to the extension of frequency combs to the mid-IR and THz through optically pumped microresonators [5] and electrically pumped quantum cascade lasers [6,7].
Mid-IR and THz spectral regions are especially important in the fields of sensing and spectroscopy since many chemical species have strong absorption lines there. Such developments gave large momentum to the effort of integrating comb-based spectroscopy platforms onto chip-sized platforms [8]. Quantum cascade lasers [9] are intrinsically well suited to be applied for on-chip integration and a rapid development of QCL-based comb sources has been observed in the past few years. THz QCLs have been shown both to emit ultrashort pulses via active mode locking [10,11] and/or RF switching techniques [12] and also to present wide spectral bandwidth coverage [13,14,15] in comb emission without pulses [16,17]. Comb operation can be controlled with dispersion compensation [7,18,19] and/or with efficient RF injection locking to metrological sources [20,21].
The requirements for having a robust comb operation are as follows. A wide spectral bandwidth active region that has to feature a reasonably low threshold current density to ease continuous wave (CW) operation over the whole dynamic range, a low-loss waveguide with eventual dispersion [7] and mode control to have only longitudinal modes excited during operation [12].
In this paper, we report on recent advances for producing high-power THz QCL-based combs operating above the technologically important barrier of liquid nitrogen, T = 77 K. In order to improve the performance of our laser ridges, in the present study (for comb generation), we employ low-loss Cu–Cu metal waveguides following the procedure described in Ref. [22], where they were used in combination with a high-gain two-quantum well structure to increased the maximum operating temperature of THz QCLs up to 210 K. We investigate pulsed and CW output power, their temperature performance and the coherence of comb generation at a temperature of 80 K of such Cu–Cu devices. Further, the comb state is stabilized by RF injection locking and even extended under strong RF injection.

We showed the impacts of low-loss Cu–Cu waveguides on laser performance, allowing pulsed operation above 135 K and CW above 95 K, more than 30 K resp 10 K higher than the respective Au–Au counterparts [23]. Simultaneously, output power of roughly 8 mW in pulsed and CW up to 70 K and 5.8 mW in CW at 80 K for a 4 mm long and 85 m wide device are found. Further, free running comb operation and its injection locking at a temperature of 80 K are demonstrated. By strong injection, the underlying comb state at 80 K is significantly changed, resulting in an increased emission width from 600 to 700 GHz and change in the individual mode intensities. The demonstration of a stable, RF-injected comb at 80 K is significant in view of the application of such devices in dual comb experiments and setups [35,36].

The active region was designed by G.S. The active region structure was grown by M.B., A.F. and L.B. fabricated the QCL devices. Measurements and data analysis were performed by A.F. and G.S. The project was supervised by J.F. and G.S. All authors have read and agreed to the published version of the manuscript.

The Authors acknowledge discussions with Stefano Barbieri and Philipp Täschler and technical help from Urban Senica. 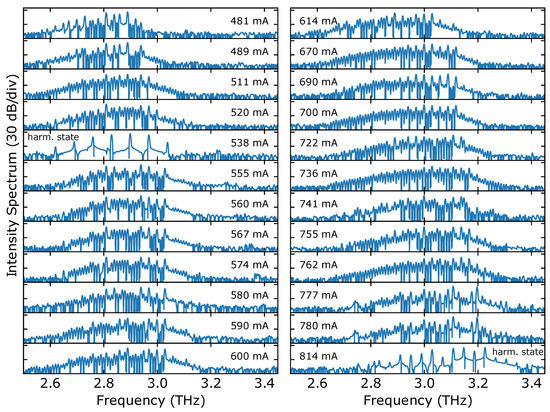 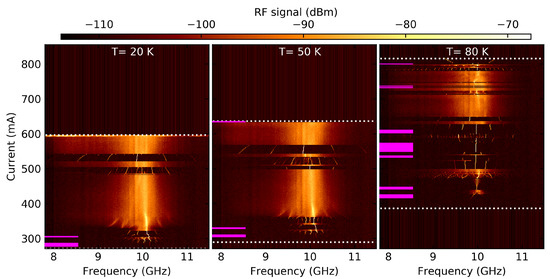 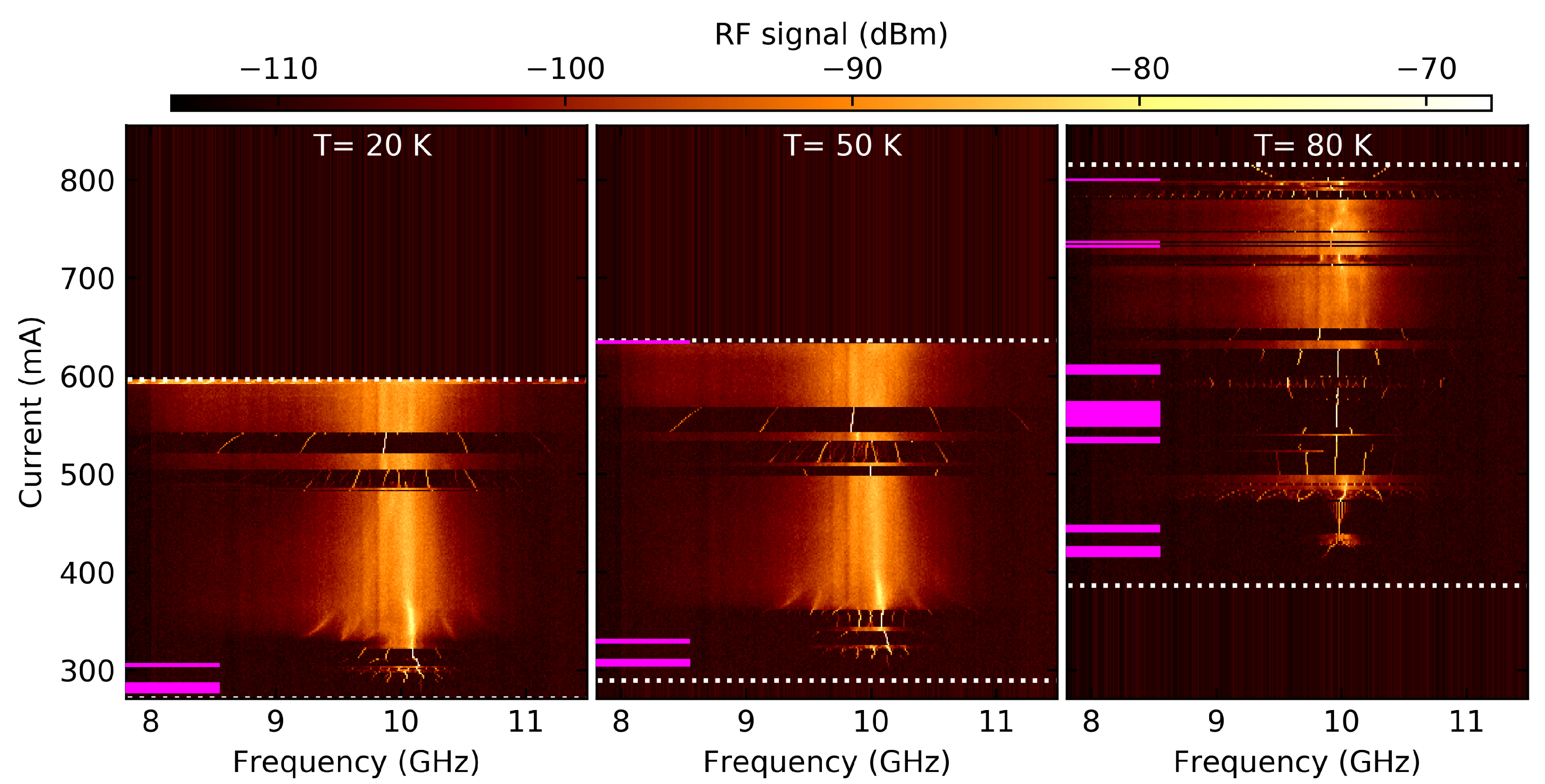 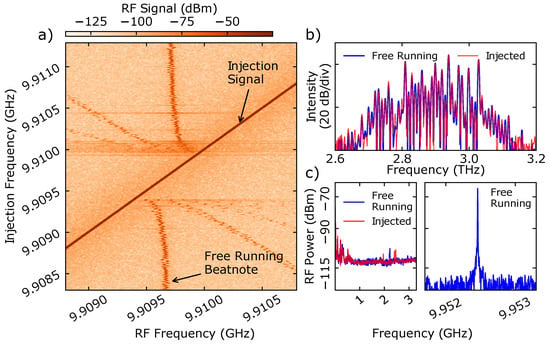