Photobiomodulation for Alzheimer’s Disease: Has the Light Dawned?
Next Article in Special Issue

The Theoretical Concept of Polarization Reflectometric Interference Spectroscopy (PRIFS): An Optical Method to Monitor Molecule Adsorption and Nanoparticle Adhesion on the Surface of Thin Films

In this paper, we present an improved reflectometric interference spectroscopy (RIfS) sensor principle which is suitable for thin films. The conventional RIfS technique is an appropriate method to detect interfacial interactions at the solid–gas or solid–liquid interface in the case of thin films with a thickness of a few hundred nanometers, but when a significantly lower layer thickness (~100 nm) is required, the method is barely usable. By applying polarized reflected light and monitoring the ratio of the p- and s-polarized components, a characteristic curve can be obtained with one or a few local extreme value(s) with significantly favorable intensity ratios compared to the conventional method. In this work we studied the effect of film thickness, incident angle and the refractive indices of the thin film, the medium and the substrate. As a main result, it was demonstrated that the sensitivity of the PRIfS method is 4–7 times higher than that of the conventional technique near a critical angle. In simulated adsorption experiments, it was determined that the sensitivity of RIfS is around 550 nm/RIU (refractive index unit), while it is 1825 and 3966 nm/RIU for PRIfS in gas and aqueous phase, respectively. View Full-Text
Keywords: polarized reflectometric interference; spectroscopy; thin films; optical fiber refractometer polarized reflectometric interference; spectroscopy; thin films; optical fiber refractometer
►▼ Show Figures 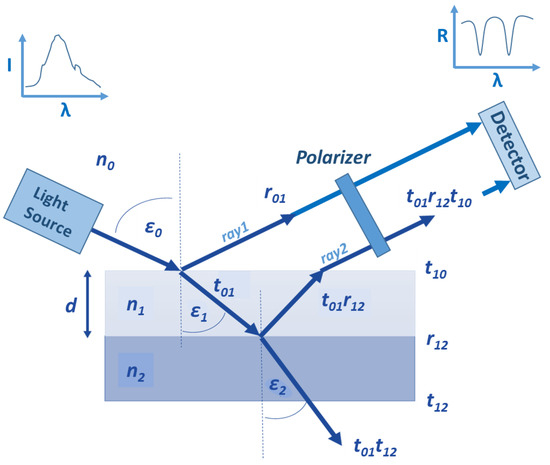