Water and energy systems are interdependent and must be tackled together as a water–energy nexus in modern society [1,2]. The development of technologies to recover the dissipated energy embodied in water is one major focus in the R&D in water–energy nexus. Besides the well-known kinetic power of water resulted from hydraulic head difference, salinity gradient energy (SGE) is a type of less known energy embodied in water due to the chemical potential between different salinities [3,4,5]. When two solutions of different salinities are separated with a semipermeable membrane, water moves through the membrane from the low salinity side to the high salinity side, driven by this chemical potential [6,7,8]. The chemical potential can be harnessed with a membrane process commonly known as pressure retarded osmosis (PRO). The amount of SGE is estimated at about 2.6 terawatts globally or approximately 20% of the current worldwide energy consumption rate [9].
The SGE has not been utilized yet mainly because of the low efficiency of the PRO process [10,11]. All pilot PRO processes conducted so far failed to continuously produce power at a rate above 5 watts per square meter of the membrane, which is the economic breakeven point for harnessing SGE estimated according to the current membrane cost and electricity price [12,13,14,15,16]. A recent study suggested that water continuity inside the membrane is critical for water transport through the membrane and that it might not be maintained under osmotic pressure [17]. The addition of external hydraulic pressure on the feed side may help to maintain water continuity inside the membrane so that the water flux and, therefore, the power production rate could be significantly increased [18]. Independent studies reported a similar role of hydraulic pressure on water flux in pressure-assisted osmosis (PAO) [19,20].
The main objective of this paper is to present a theoretical investigation about the impact of hydraulic pressures on the energy production rate. Equations for the power production rate with hydraulic pressure applied on both sides of the membrane are formulated, and the optimal condition for SGE harnessing is derived. The suitability of currently available membranes and plausible scenarios for profitable operation of the membrane process are also discussed and identified.

The power density of the membrane process shown in Figure 1 was simulated below and compared with the conventional PRO. In all of the simulations, seawater and freshwater of negligible osmotic pressure were considered as draw and feed solutions. It is worthy to point out that Equation (3) is for the energy production in ideal situations. The losses due to the concentration polarization and other inefficiencies of the membrane process are not considered. Furthermore, the efficiencies of the pressure exchanger and pumps in the system are assumed to be ideally 100%. In real-world situations, a lower energy production rate would be expected because of non-ideality of the membrane systems.

4.2. Assessments of the Currently Available Membranes

Membranes of the desirable properties are considered the key component for the successful harnessing of SGE in the conventional PRO. It was concluded at the shutdown of Statcraft pilot PRO project that such membranes would not become available in the foreseeable future [16]. However, the membranes are no longer a problem with addition of the external hydraulic pressure as the primary driving force for water transport.
The currently available semipermeable membranes are mainly RO membranes that can be roughly categorized into three groups: seawater RO, brackish water RO, and ultralow pressure RO (SWRO, BWRO, and ULPRO). These three groups of RO membranes have distinguishably different permeabilities. The peak power densities of these membranes with seawater and freshwater under the optimal arrangement of external and retarded pressures were calculated, and the results are shown in Table 2 together with their typical permeabilities.
It can be seen that the breakeven power density of 5 W/m2 can be achieved even with the least permeable SWRO membranes under the salinity gradient of seawater and freshwater. The power densities of BWRO and ULPRO membranes are markedly high at 21.26 and 59.06 W/m2, respectively. It should be pointed out that the RO membranes possess more than sufficient mechanical strength that would be needed for harnessing SGE.
In the above calculations, the original osmotic pressure of the seawater was used. Therefore, the values listed in Table 1 are actually the theoretical upper limits of the power density when an infinitesimal fraction of freshwater is mixed with seawater. In real-world situations, the osmotic pressure of the mixed solution should be smaller than the original osmotic pressure of seawater because a definite fraction of freshwater will mix with seawater. Substituting the osmotic pressure of the mixed solution into Equation (9), the equation becomes where f (, with and being the volumes of feed water and draw solution, respectively, is the feed fraction to the membrane process.
Power density at different feed fractions was calculated for the three types of RO membranes, and the results are presented in Figure 4. The broken line in the figure indicates the breakeven power density of 5 W/m2. First, it can be seen that the power density of the membrane is a strong function of the feed fraction and that it decreases with the increasing feed fraction. Second, there is a range of feed fractions for each membrane in which above the breakeven power density of 5 W/m2 can be obtained. Figure 4 shows that the SWRO membranes are practically unsuitable for harnessing SGE because they can only produce the required power density (>5 W/m2) in a very small range of feed fractions, which is too small to be of any practical interests. The BWRO and ULPRO membranes are very promising candidates because they can produce the above breakeven point power density in ranges of feed fractions 0–50% and 0–70%, respectively.

By manipulating hydraulic pressures on feed and draw sides of the membrane, a much higher production rate of SGE than that in the conventional PRO can be obtained. In this process, the chemical potential (in terms of osmotic pressure difference) from the salinity gradient is primarily used to raise the pressure of the permeated water. Under the external hydraulic pressure, water flux can be orders of magnitude higher than the direct use of osmotic pressure of the same value as the driving force. Therefore, the power density of the membrane can be orders of magnitude higher than in the conventional PRO.
Furthermore, the currently available BWRO and ULPRO membranes are capable to produce the power density above the breakeven point required for profitably harnessing the SGE between seawater and freshwater. These membranes also have the needed mechanical strength to work under the hydraulic pressure difference across the membrane at the optimal operation conditions. It has also been shown that the specific energy of water also satisfies the requirements for profitable harnessing SGE in a plausible range of feed fraction around 0.50. 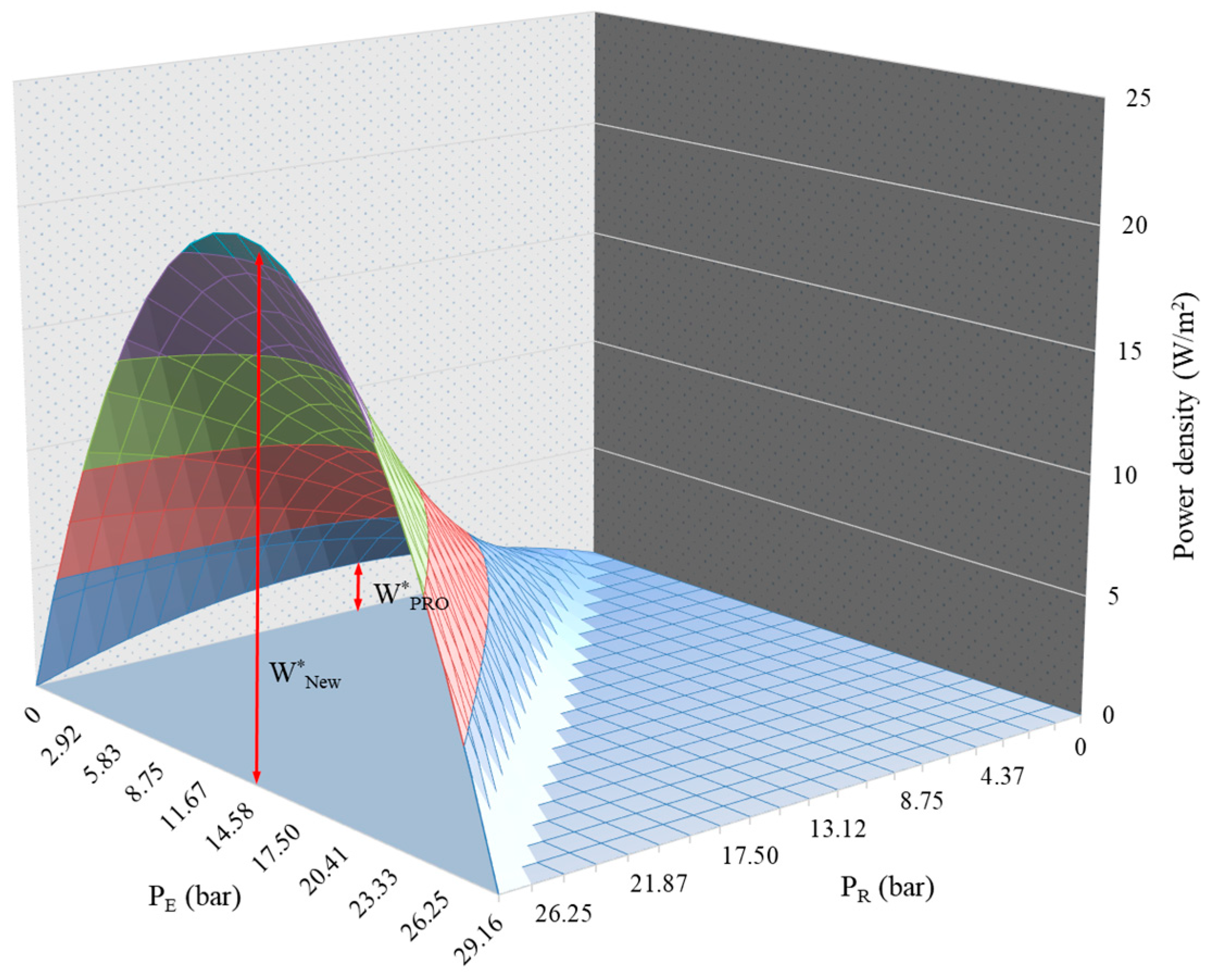 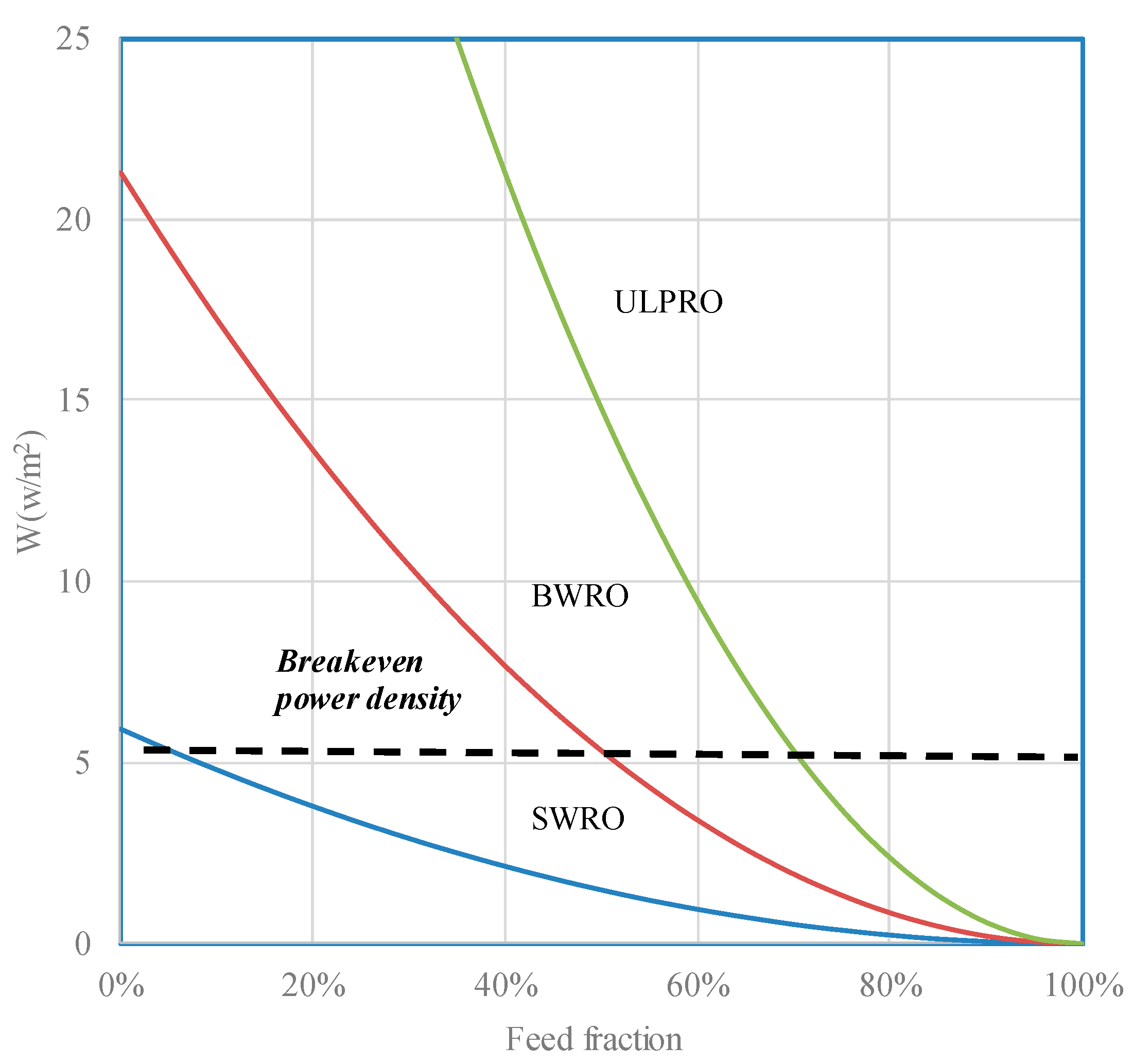 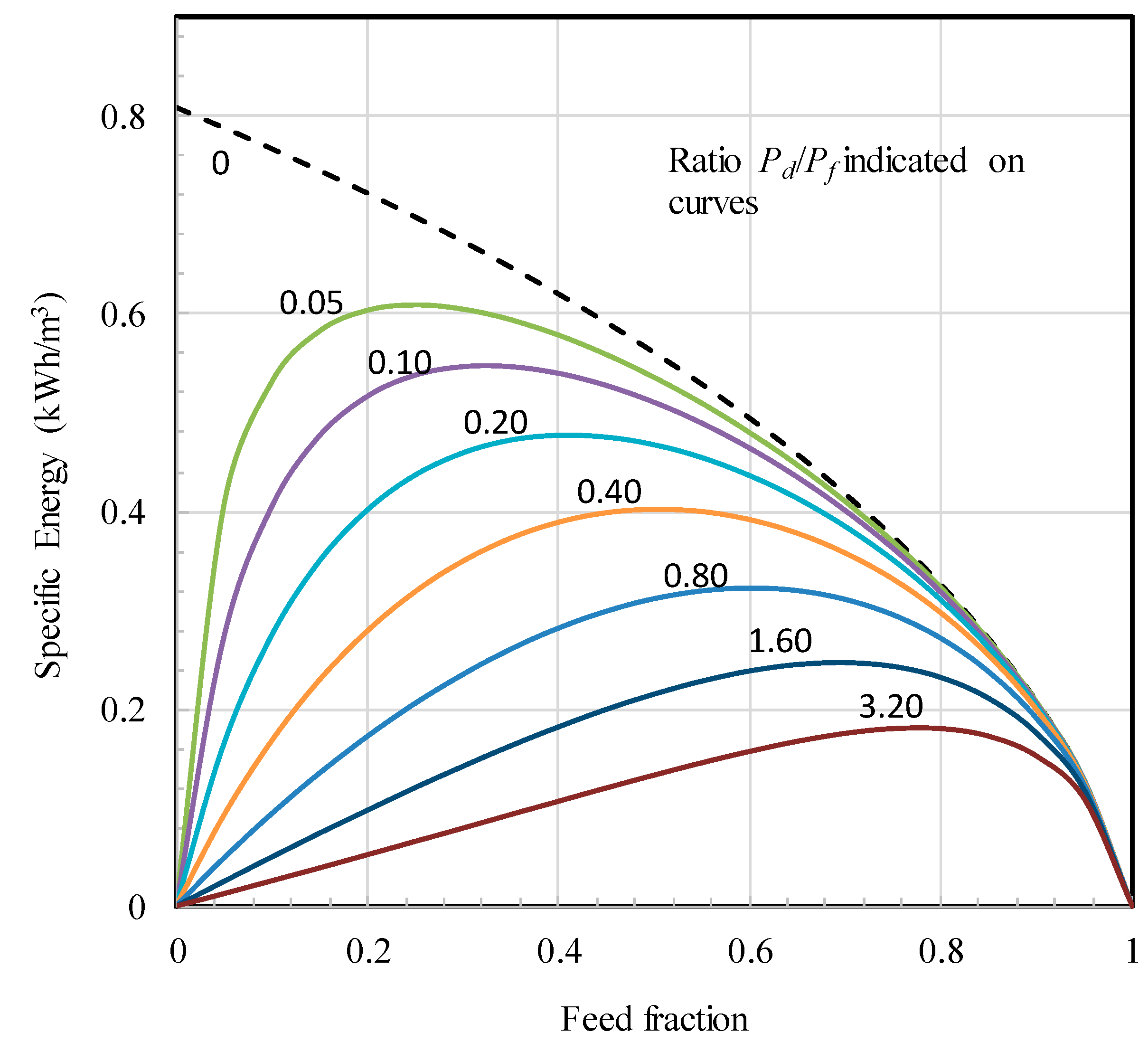