Breast cancer is the most common malignancy in both developing and developed countries. In this study, we simultaneously analyzed nine constituent compounds from Spatholobi Caulis (gallic acid, (−)-gallocatechin, 3,4-dihydroxybenzoic acid, procyanidin B1, 3,4-dihydroxybenzaldehyde, catechin, procyanidin B2, epicatechin, and (−)-epicatechin gallate) and examined their anticancer effects on MCF-7 and MDA-MB-231 human breast cancer cells. The experimental results indicated that the gallic acid showed the strongest cytotoxic effect on MCF-7 cells among tested compounds whilst most of samples did not express inhibitory effect on viability of MDA-MB-231 cells, except for 70% ethanol extract of S. Caulis. Thus, gallic acid was chosen to extend anticancer mechanism study on MCF-7 cells. Our data showed that the gallic acid induced apoptotic MCF-7 cell death through both extrinsic and intrinsic pathways, which increased the expression of cleaved caspase-7, -8, and -9, Bax and p53, but reduced the expression of Bcl-2 and poly (ADP-ribose) polymerase (PARP). In addition, the network pharmacological analysis pointed out that the p53, mitogen-activated protein kinase (MAPK), estrogen, and Wnt signaling pathways have a great correlation with the targets of gallic acid. This study suggested that gallic acid is a bioactive component of S. Caulis with potential to be used in chemotherapy for breast cancer. View Full-Text
Keywords: MCF-7; breast cancer; Spatholobi Caulis; gallic acid; apoptosis; p53; network pharmacology MCF-7; breast cancer; Spatholobi Caulis; gallic acid; apoptosis; p53; network pharmacology
►▼ Show Figures 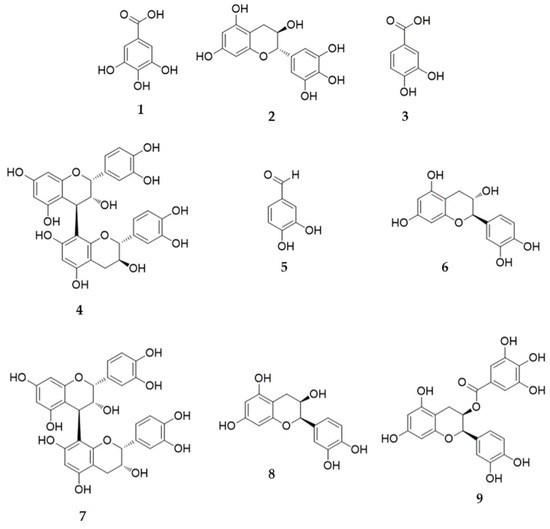