Quantifying the Effect of COD to TN Ratio, DO Concentration and Temperature on Filamentous Microorganisms’ Population and Trans-Membrane Pressure (TMP) in Membrane Bio-Reactors (MBR)
Previous Article in Journal

The recirculating aquaculture system (RAS) is a land-based water treatment technology, which allows for farming aquatic organisms, such as fish, by reusing the water in the production (often less than 5%). This technology is based on the use of filters, either mechanical or biological, and can, in principle, be used for any species grown in aquaculture. Due to the low recirculation rate, ammonia accumulates in the system and must be converted into nitrate using nitrification reactors. Although less toxic for fish, nitrate can also be further reduced into nitrogen gas by the use of denitrification biofilters which may create several issues, such as incomplete denitrification, resulting in toxic substances, such as nitrite and nitric oxide, or a waste of carbon source in excess. Control of the added quantity of carbon source in the denitrification biofilter is then mandatory to keep nitrate/nitrite concentrations under toxic levels for fish and in accordance with local effluent regulations, and to reduce costs related to wasted organic carbon sources. This study therefore investigates the application of different control methodologies to a denitrification reactor in a RAS. To this end, a numerical simulator is built to predict the RAS behavior and to allow for the comparison of different control approaches, in the presence of changes in the operating conditions, such as fish density and biofilter removal efficiency. First, a classical proportional-integral-derivative (PID) controller was designed, based on an SIMC tuning method depending on the amount of ammonia excreted by fish. Then, linearizing and cascade controllers were considered as possible alternatives. View Full-Text
Keywords: wastewater treatment; mathematical modeling; process control; denitrification wastewater treatment; mathematical modeling; process control; denitrification
►▼ Show Figures 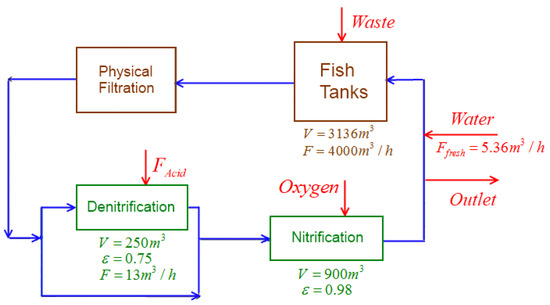