Background: This study aims to describe malnutrition among children under five and to describe the food insecurity status during the current conflict in Yemen. Methods: Data were obtained from a Yemeni nutrition surveillance program (pilot phase) targeting 4142 households with 5276 children under five from two governorates (Ibb and Sana’a). Results: Global acute malnutrition was found in 13.3% of overall screened children, while 4.9% had severe acute malnutrition (SAM) and 8.4% had moderate acute malnutrition. One-fifth of the children under six months of age were acutely malnourished, followed by children under two years at 18.5% based on weight-for-height z scores. Significant associations between malnutrition and other diseases included suspected measles at three times higher rates (4.5%, p < 0.00) among SAM cases than other children. Diarrhea, fever, and cough were significantly higher among the SAM group (p < 0.05). Most households depended on market food purchases in the month preceding this survey (84.7%). Household coping mechanisms to secure daily meals included borrowing food to survive, changing types and quality of food, and decreasing the number of meals per day; some families sent their children to live with relatives. Conclusion: Malnutrition is a serious public health problem. The humanitarian community needs to adopt alternative strategies to improve food security and the nutrition status in Yemen. View Full-Text
Keywords: malnutrition; food insecurity; infection; Yemen malnutrition; food insecurity; infection; Yemen
►▼ Show Figures 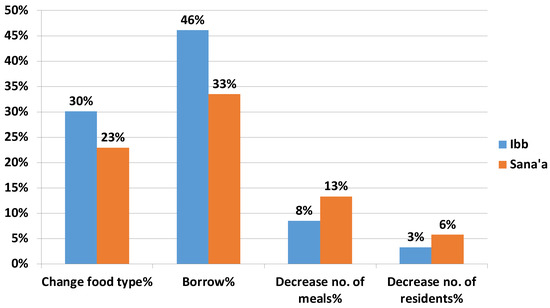