Laboratory fermentations were performed in the reaction calorimeter RC1e from Mettler Toledo. It is a computer-controlled benchtop batch bioreactor with a working volume of 0.7 L. By using specific modifications in hardware and software, it was used as a bioreactor. A more detailed description of RC1e can be found in [31].

The selection of the output quantity that could be used as the feedback variable in the control system is crucial for the implementation of the control theory and the realization of the theoretical approach. It is necessary that the measured quantity contains as much information on the fermentation process as possible. At the same time, it is also important that the measurement should be accurate and could be performed on-line.
In the fermentation processes, dissolved oxygen and cell culture measurement are essential for ensuring optimal conditions for cell growth. The oxygen levels in bioreactors can have an impact on the growth rate, nutrients’ uptake, cellular morphology, and metabolite synthesis, leading to end-product quality. Accurate oxygen control is only possible if measurements from dissolved oxygen sensors installed in fermenters/bioreactors are reliable. Biomass concentration is another critically needed measurement in fermentation studies.
In performing laboratory tests, it is not always possible to measure these two biochemical quantities and, thus, conclude whether their trajectories are such as to ensure the desired course of the fermentation process with a high-quality end product. This is the reason that in the proposed study, the measurement of the CO2 dissolved in the bioreactor’s medium was introduced. CO2 is a product of the cellular metabolism of microorganisms. Assuming the growth medium with a sufficient carbon source, the measured CO2 concentration profile could also be the indicator of the fermentation progress [32]. Accurate, real-time data on the concentration of CO2 increases the understanding of the fermentation process and can get a better insight into cell metabolism, cell culture productivity, and other changes within bioreactors [33]. The distribution of the CO2 in the bioreactor medium is very homogeneous. The sensors for the measurement of CO2 concentration are reliable, accurate, maintenance free, have a long lifetime, and have a known measurement curve [33]. The duration of the measurement process is short; therefore, these sensors are convenient for implementation in real-time control systems.
For the measurement of the dissolved CO2 in the laboratory bioreactor the ISE51B (Mettler Toledo) ion-selective electrode was used. A measuring system can be modelled with the 1st-order differential equation. The laboratory measuring system can be matched with the mathematical model with a gain kCO2ms = 1 mmol/g and a time constant TCO2ms < 0.01 h. The time constant of the measurement system is almost negligible compared to the inherently slow dynamics of the biotechnological systems.

2.2.4. Equipment for Data Acquisition and Control

For the connection of the dissolved CO2 measurement sensor and signal adjustment, the SevenMulti (Mettler Toledo) basic device with an expansion module was used. The analogue 1st-order low-pass filter for the elimination of sensor noise is integrated into the expansion module.
For the transfer of measured signals from the SevenMulti basic unit to PC, the basic device was equipped with a digital output module (USB). For the comprehensive measurement of several quantities over a long time period and for the necessary signal processing, software LabX direct pH 2.3 was installed on the PC. This is professional equipment used for a data logger and a data analysis. The selected sampling time was 10 min. This sampling time was sufficient due to the slow dynamics of the fermentation process. During the performing the experiments, the sampling time was changed and adjusted to the dynamics of the measured signal. The measured data were saved into Microsoft Office 365 Excel documents, transferred into MathWorks MATLAB, and processed using MATLAB with its Optimization toolbox functions [7].
For the implementation of the control system, a dSpace 1103 PPC controller board was utilized. The controller is equipped with 16-bit A/D and D/A converters as well as serial and CAN interfaces [7]. An analogue output module of the basic device SevenMulti was used for the transfer of the measured signal of the CO2 concentration from the bioreactor system to the controller’s analogue input. The additional analogue 1st-order low-pass filter was used at the dSpace analogue input to eliminate the superposed noise signal. The analogue output signal from the controller is sent to the input of the heating/cooling system. To enable this connection, the heating/cooling system was equipped with an additional electronic interface.

To perform the parameter estimation and fermentation control, the laboratory batch bioreactor was supplemented with the controlled heating/cooling system, measuring system, PC for parameter estimation, and dSpace for control implementation. The laboratory set-up for the measurement of the time response of the dissolved CO2 production on the temperature changes and estimation of model parameters is shown in Figure 1a. Laboratory set-up for the control of the dissolved CO2 production is shown in Figure 1b.

2.4. Mathematical Model of the Fermentation Process

Developed control systems were tested on the laboratory batch bioreactor. HW and SW equipment described in Section 2.2.4 and Section 2.3 was used for the implementation of control systems. From the simulations was seen that the differences between responses are not significant. The results of laboratory tests were comparable. Due to additional reasons related to the realization and equipment used, it is difficult to objectively evaluate individual control concepts’ effectiveness from the test results. Figure 13 shows the time responses of the reference and actual dissolved CO2 concentration obtained with the experiment where the simple adaptive control was used for control of fermentation process of laboratory batch bioreactor with fully activated kefir grains. It can be seen from Figure 13 that the developed adaptive control system ensures the tracking of the actual dissolved CO2 concentration to the reference trajectory. The deviation at the beginning of the transient is due to zero initial values in the integral elements of the adaptation mechanism. The reference trajectory tracking can be further improved by selecting the adaptation mechanism’s initial values and weighting coefficients adjusted to the fermentation process. The response to the control of the fermentation process with inactivated kefir grains was very similar despite the fact that the controller’s parameters stay unchanged.

The article combines the fields of Control Engineering and Bioprocess Engineering. It shows the applicability of the conventional and advanced control approaches for the control of the fermentation processes in the batch bioreactors.
There are some important conclusions and contributions of this paper:
The similarity of the results obtained with the optimized conventional linear control system and advanced non-linear adaptive control system could lead to the opinion that both presented control concepts’ efficiencies are very similar. However, there is a major difference between the tuning procedure and the related usability of both concepts. While the use of linear control with constant parameters requires knowledge of the exact mathematical model of each fermentation process, the adaptive control ensures the desired course of the fermentation process, even when the structure and parameters of the mathematical model are unknown. 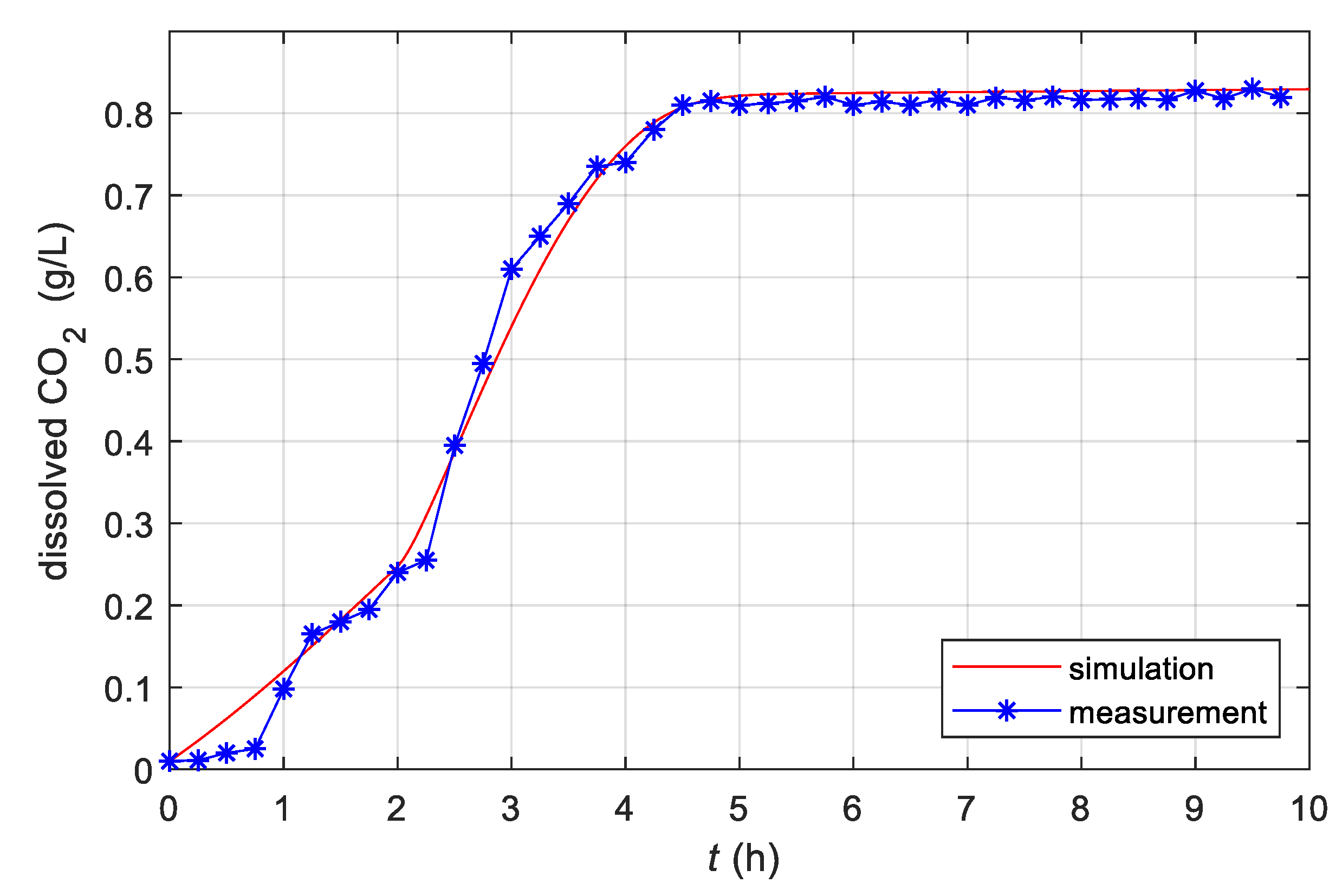 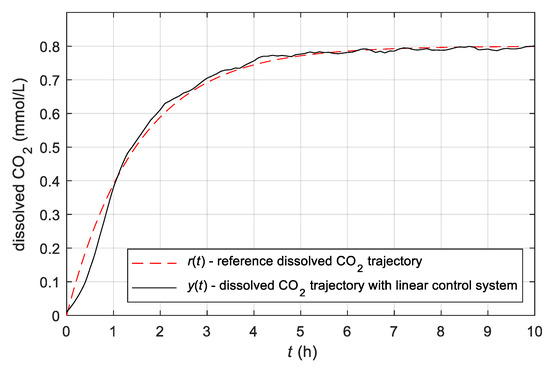 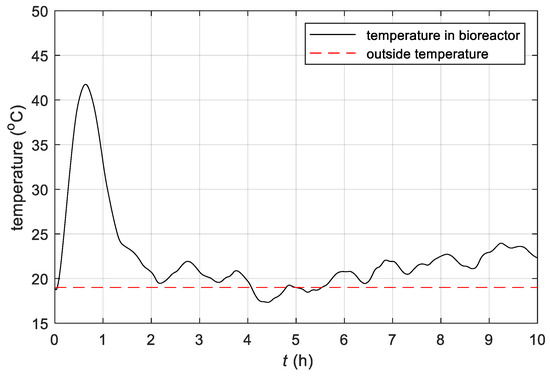 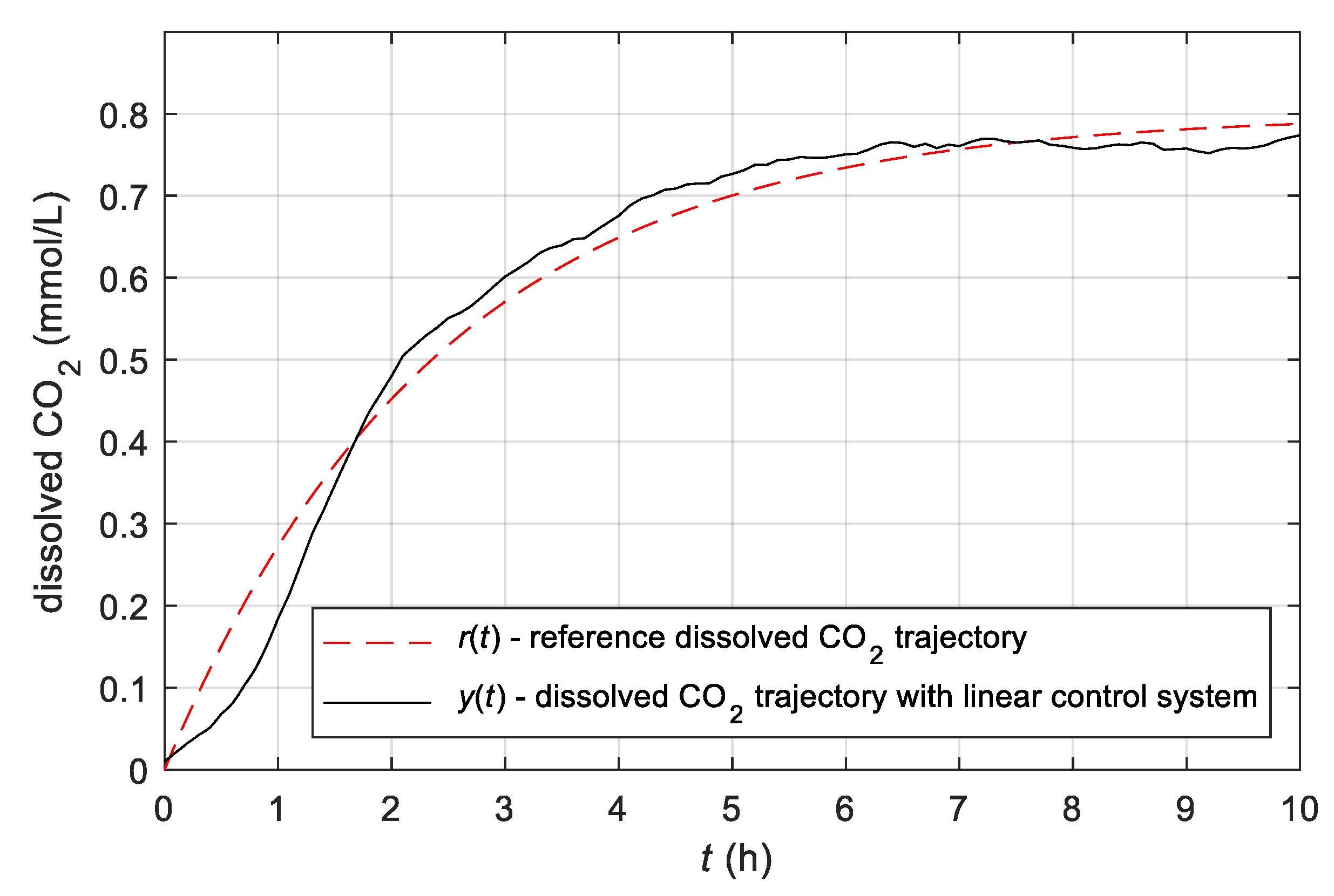 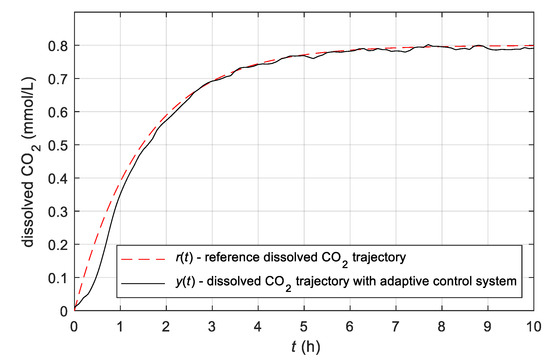 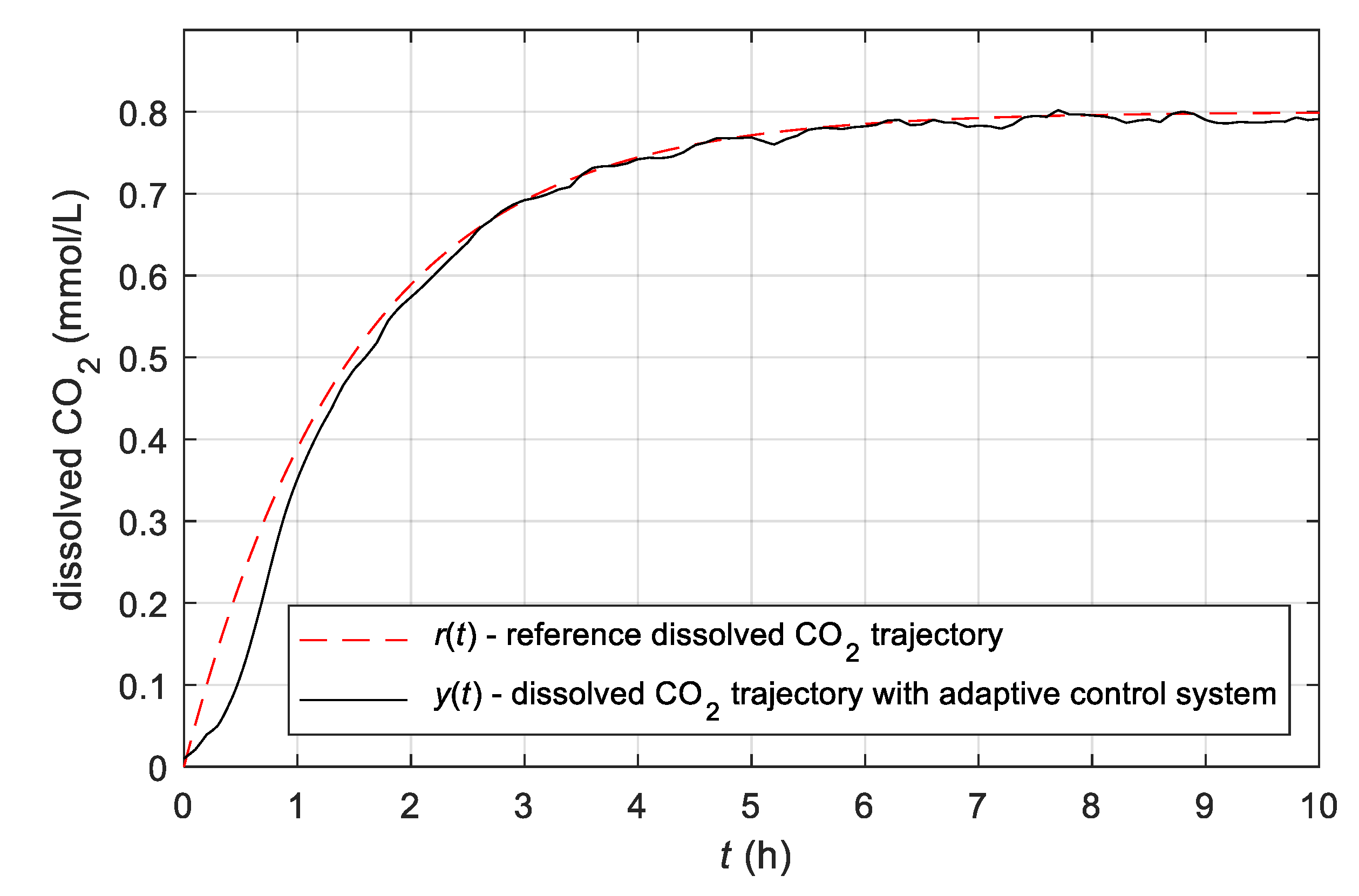 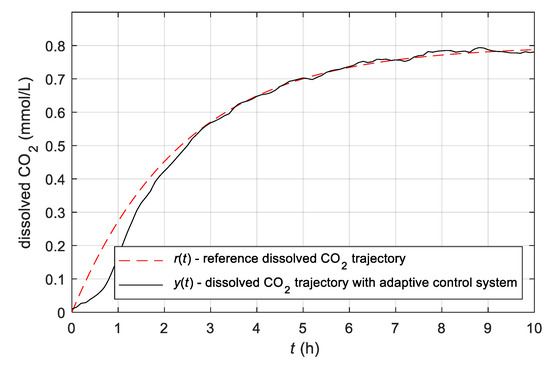 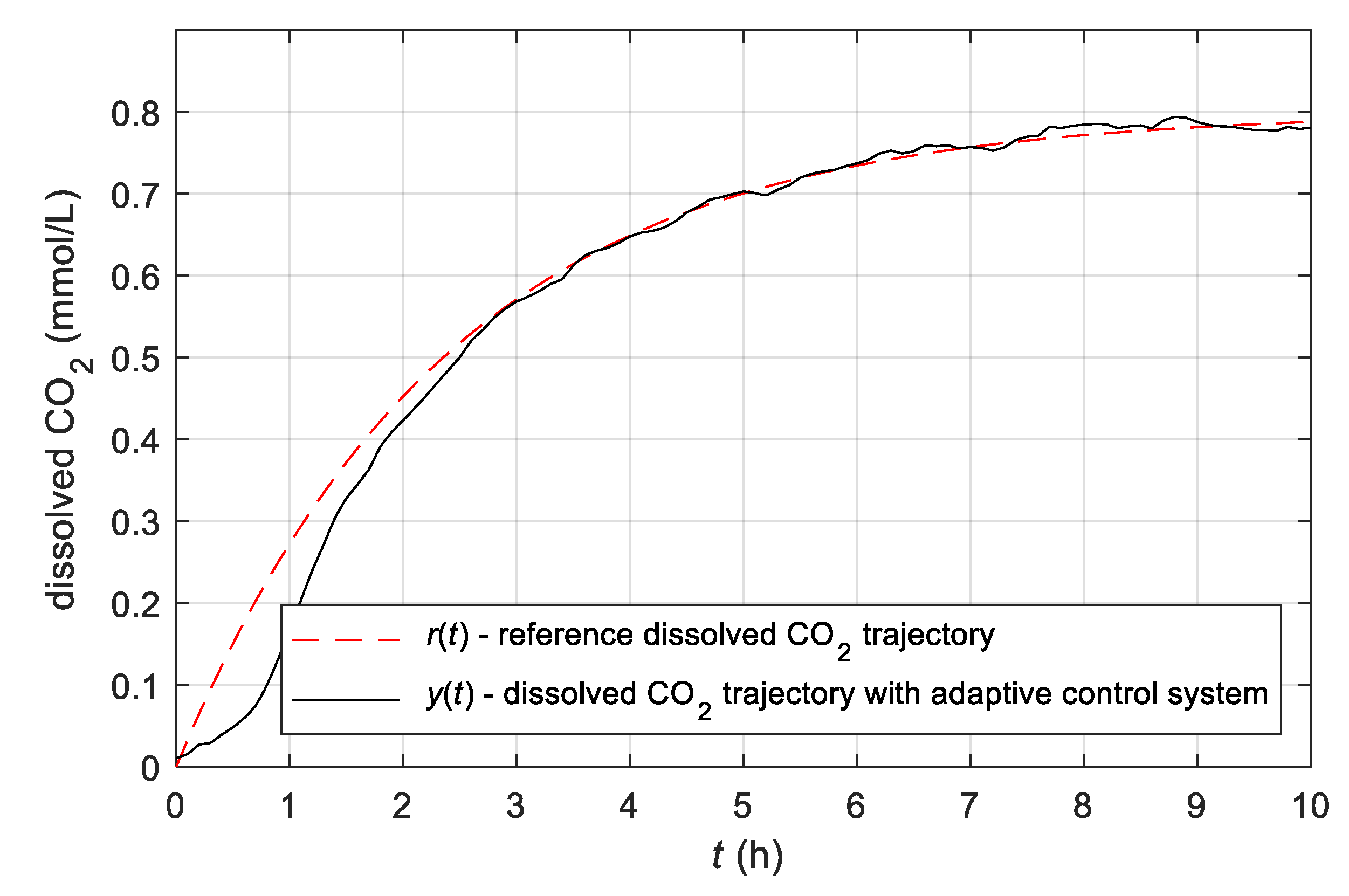 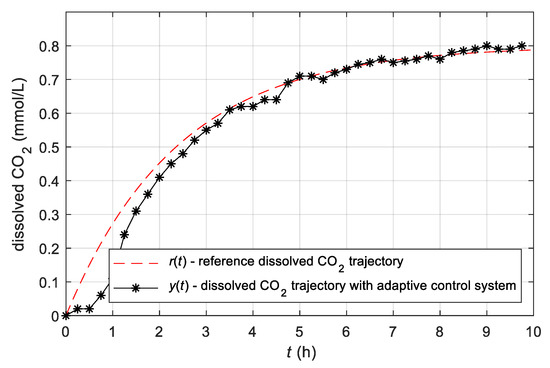 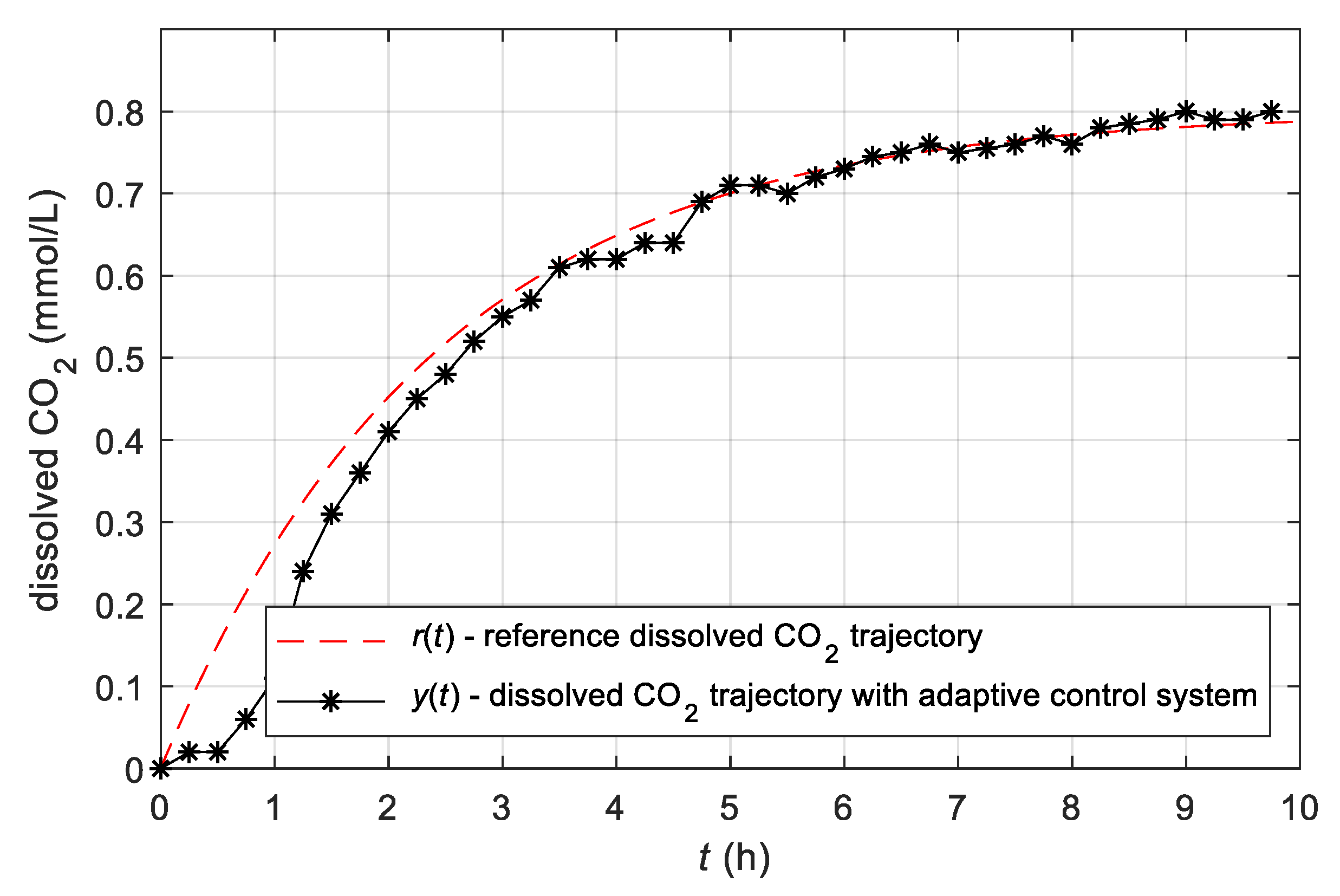