A PC-PSP coating is a single-layer structure consisting of porous particles, adhesive polymer, and luminescent molecules (Figure 1). Porous particles and adhesive polymer were mixed in solution and sprayed over a test plate. The spray-coated test plate was then dipped in a separate luminophore solution. The recipe of the PC-PSP in this work followed that of previous studies [9,12]. The porous particle chosen, Silica gel (SiO2, Sigma-Aldrich, St. Louis MO, USA), was embedded into the PC-PSP coating layer. The porous particle has a microscale hollow structure, with a mean particle size between 2 and 25 μm. Room temperature vulcanizing (RTV) rubber (KE-41, Shin-Etsu Chemical Co. Ltd., Tokyo, Japan) was used as an adhesive polymer to attach the PC-PSP coating layer to the surface of the test plate. The two components were mixed together in a solution of dichloromethane, which was placed in an ultrasonicator for 20 min to separate aggregated particles. The polymer-to-particle ratio of the solution (polymer content) was 20% by weight. The mixed solution was sprayed to produce a layer 30 μm thick over 20 mm square aluminum plates. Spray-coated plates were placed in a vacuum oven to evaporate the application solvent. A 0.1 mM tris-(bathophenanthroline) ruthenium (II) chloride (GFS Chemicals) was dissolved in dichloromethane to produce the luminophore solution. Spray-coated plates were dipped into the luminophore solution for 20 min at room temperature. The dipped plates were then placed in a vacuum oven to evaporate excess solvent. Five test samples were prepared for an uncertainty analysis.

The dynamic characteristics of PC-PSP were analyzed by observing the time response of the PC-PSP to a step-change in pressure. Figure 3 shows a schematic of a shock tube, which was used to generate a step-change in pressure. The luminescent intensity response of the PC-PSP has an inherent time delay and cannot measure instantaneous pressure changes. That time delay is herein referred to as the dynamic characteristic of the PC-PSP. A diaphragm separates the shock tube into two sections: a driven section at a lower pressure, and a driver section at a higher pressure. The lengths of the driven and driver sections were 1600 mm and 600 mm, respectively, with a cross-sectional area of 30 square mm. The test facility was purged with dry air. The absolute pressure in the driven and driver sections was 3 kPa and 130 kPa, respectively. The measurement temperature inside the entire shock tube was maintained at atmospheric temperature. Once the appropriate pressure difference had been achieved, the diaphragm burst. A normal shock wave with Mach number 2.1 propagated toward the driven section. The PC-PSP test plates and a pressure transducer (XCQ-062-50A, Kulite Semiconductor Products, Inc., Leonia, NJ, USA) were placed on the endplate of the driven section. A Peltier device was embedded into the endplate to control the temperature of the test plates, which were maintained at the reference temperature for the dynamic characterization. For each dynamic calibration, the temperature of the test plate was held to the reference temperature, which was a value between 283 and 363K, by the Peltier device. Before starting the dynamic calibration, the Peltier device held the temperature of the device constant to ensure the equilibrium of the test plate. That device had accuracy of the order of the second decimal degree. Because the temperature after the incident shock wave increases due to compressible effects, the reference and measurement temperatures were different; the measurement temperature was higher than that of the reference temperature. A blue laser with a wavelength of 465 nm illuminated the test plate as an excitation light source. An optical window on the side wall allowed the excitation and luminescent intensity from the PC-PSP test plate to pass through. A photomultiplier tube (PMT) (H57730-04, Hamamatsu Photonics K.K., Shizuoka, Japan) obtained the luminescent intensity and converted the acquired luminescent intensity to a voltage output. A bandpass filter (620 ± 20 nm) was placed in front of the PMT so that only emission from the PC-PSP test plate was acquired. The time response of the PMT was in the order of nanoseconds. The time response of the PC-PSP was in the order of ten to one hundred microseconds [12,20]; the PMT had a significantly faster time response than the PC-PSP, which ensured accurate measurement of the acquired the luminescent intensity. The pressure in the driven section, Pdrive, was monitored by the pressure transducer. Once the generated normal shock wave impinged on the endplate, the PC-PSP and the pressure transducer experienced a sharp pressure increase, Preflect. A normal shock wave induces not only a sharp increase in pressure but also in temperature. This near-instantaneous pressure increase was converted to a normalized pressure to extract the time delay of the PC-PSP [20,21,22]:
Equation (4) is used to convert the obtained luminescent intensity, I, to pressure, P.

Figure 10 shows a representative step response of the PC-PSP test plate. The time response, τ, was defined as the time delay required for the PC-PSP to adjust to a step-change in pressure. The first-order system shown in Figure 10 is not appropriate to describe the response of the PC-PSP test plate. As shown in the figure, there are fast and slow components to the PC-PSPs response. Instead of applying the first-order system, the time response, τ, is defined as the time delay in reaching 90% of the normalized pressure, Pnorm. The PSP experienced pressure change as well as the temperature change by the compression due to a normal shock. The former was responded to by the oxygen quenching, and the latter was responded to by the thermal quenching. Figure 11 shows the value of τ under different reference temperatures, Tref. The value of τ fluctuated from 35 to 42 usec over the reference temperature range of 283 to 363 K. The error bars on the value of τ were obtained by repeating each dynamic characterization five times with 95% confidence interval. Within the given reference temperature range of 283–363 K characterized in this study, the temperature effect on the time response was less than 10.5%, which is within the measurement uncertainty of the response time. The temperature effect was calculated by the ratio between the mean response and the most deviated response. Because the temperature behind the reflected shock wave sharply increases, the values of Tref and T behind the reflected shock wave were not the same. Based on the compression due to a normal shock, the value of T behind the reflected shock wave rose to approximately 803 K when the temperature in the driven section was 298 K. This test experimentally simulated the conditions for which the reference and measurement temperatures are not controlled. The result indicates that the time response under the given temperature range characterized in this study is less affected by changes in temperature than the static characteristics discussed in the previous sections.

T.H. and H.S. conceived and designed the experiments; T.H. performed the experiments and analyzed the data; T.H. wrote the original draft and H.S. review and edited the paper. All authors have read and agreed to the published version of the manuscript.

The authors acknowledge the help of colleague Taku Tani in setting up the shock tube experiment and static calibration. 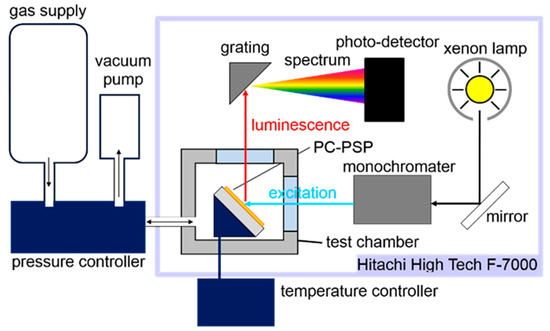 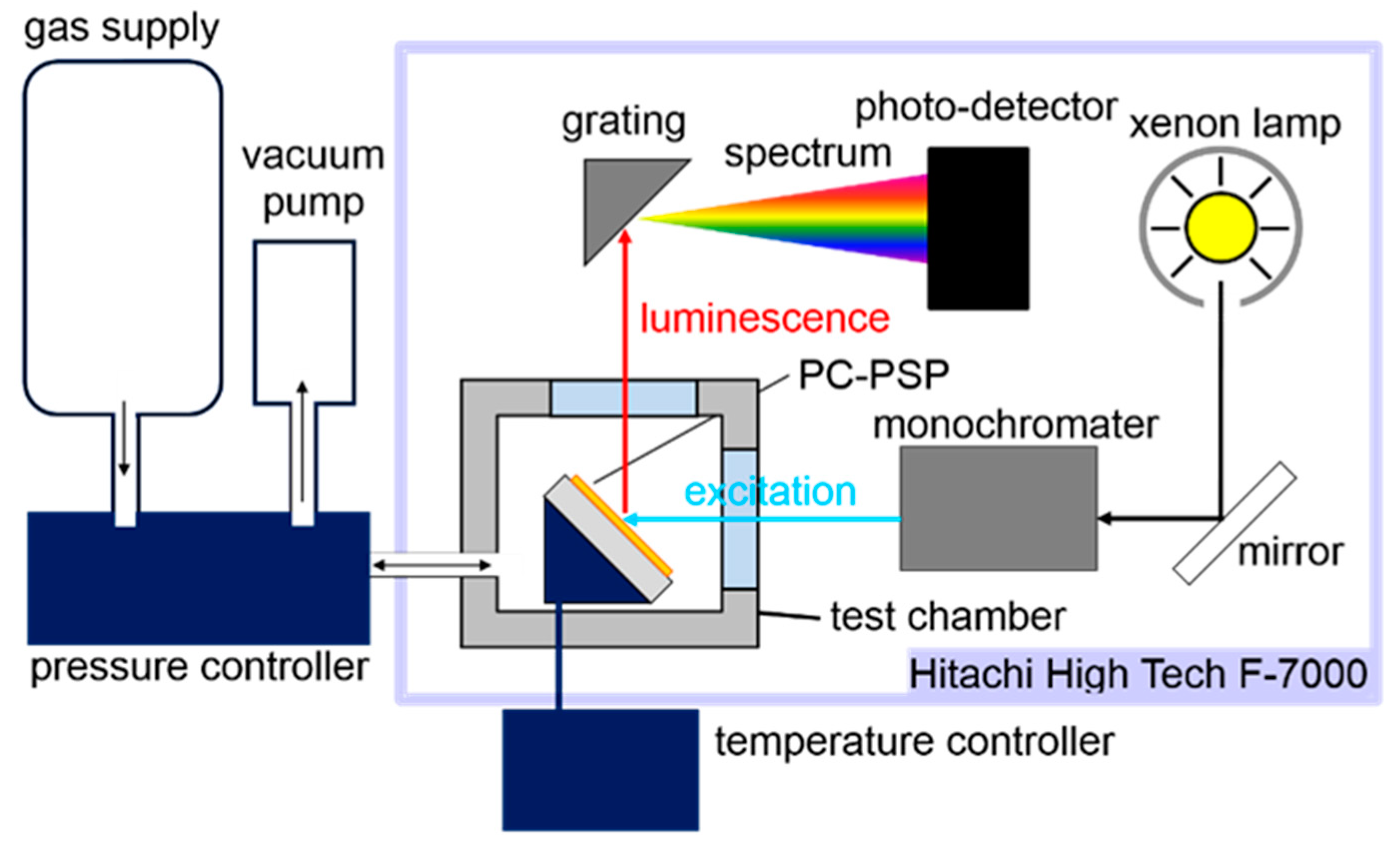 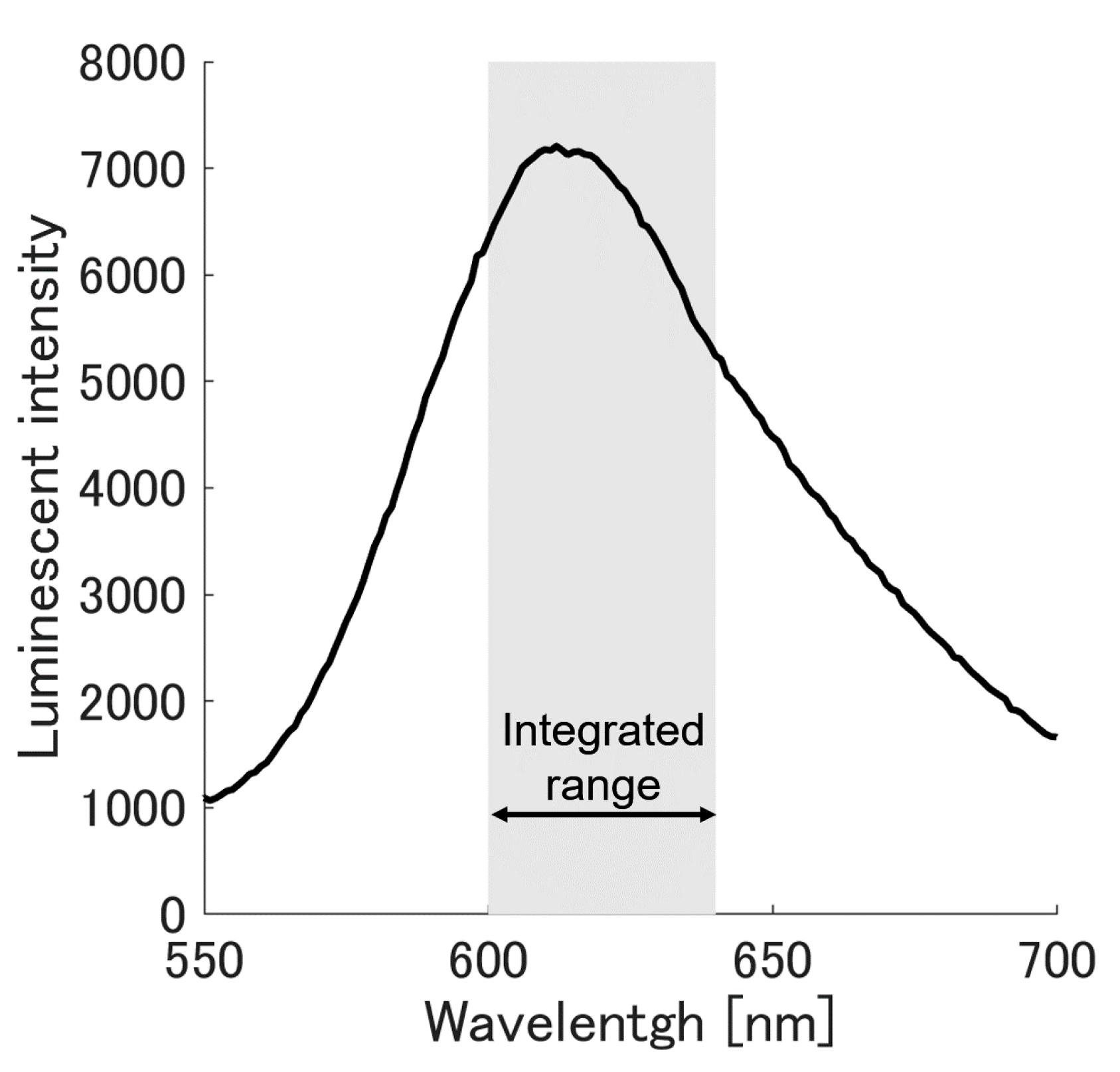 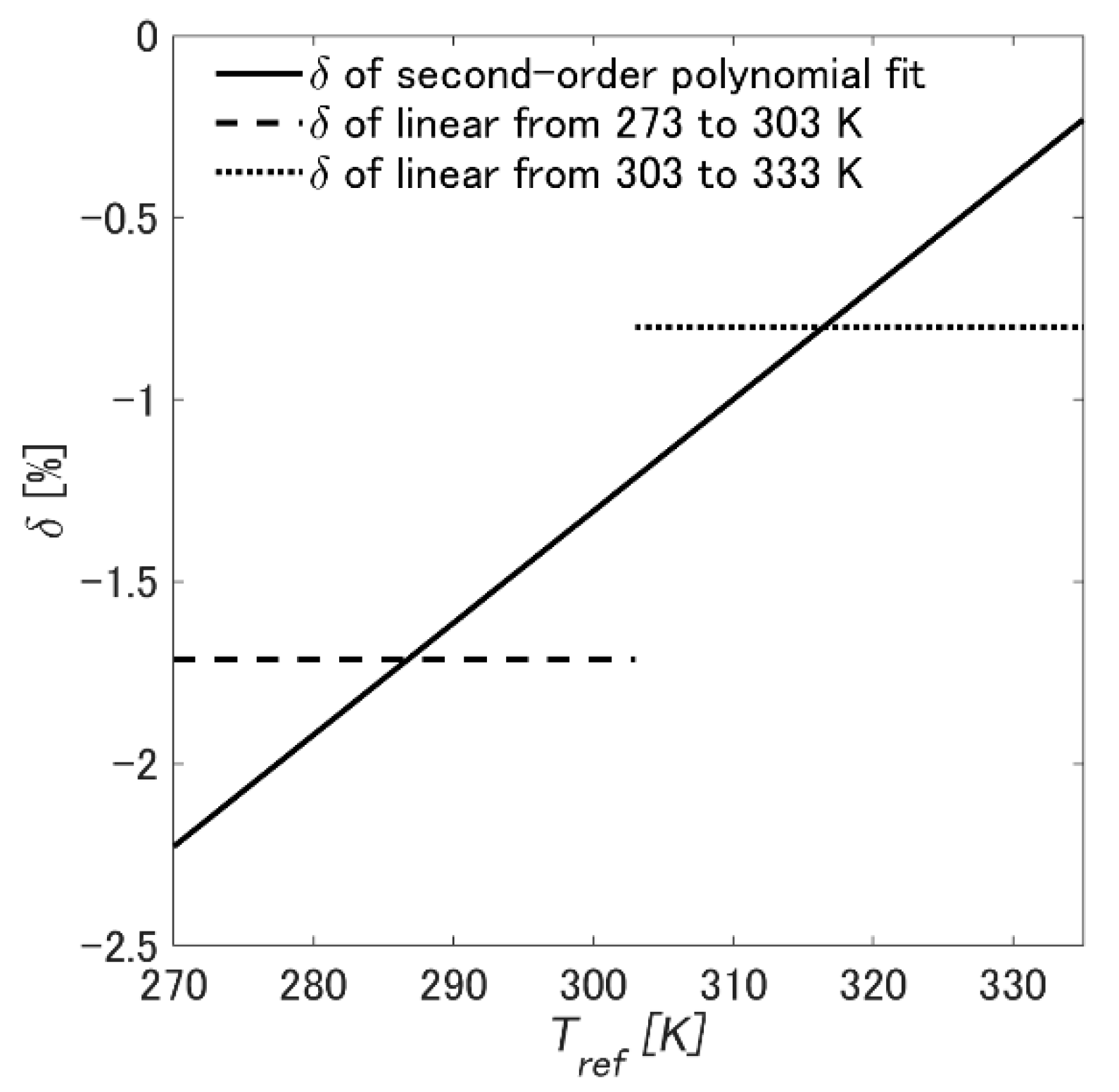 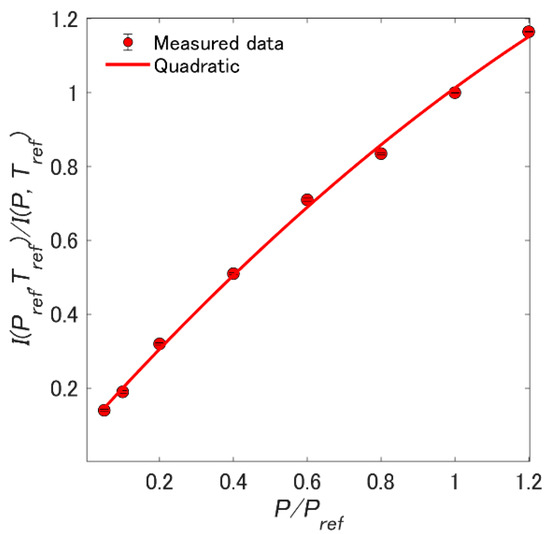 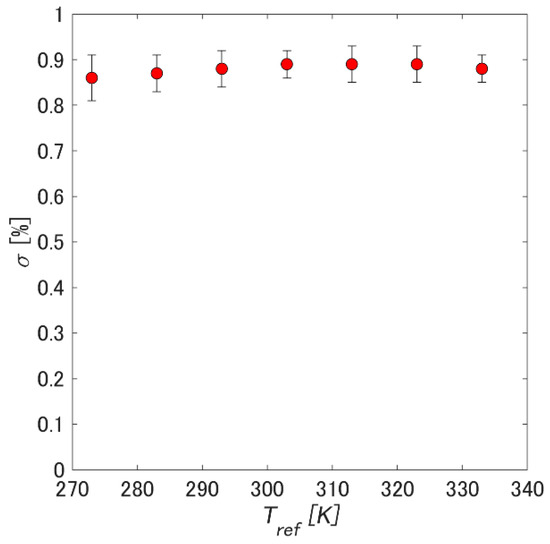 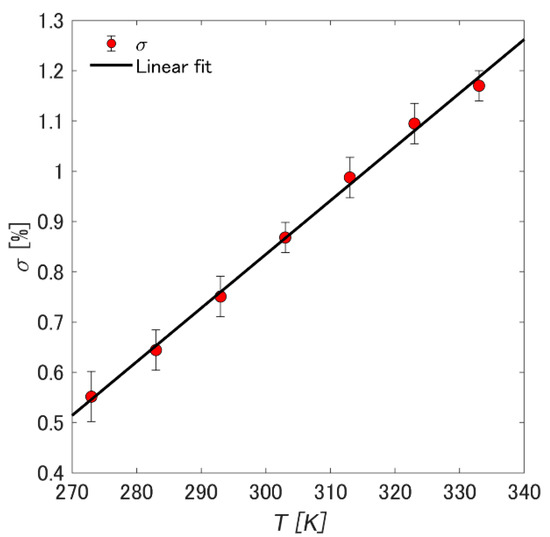 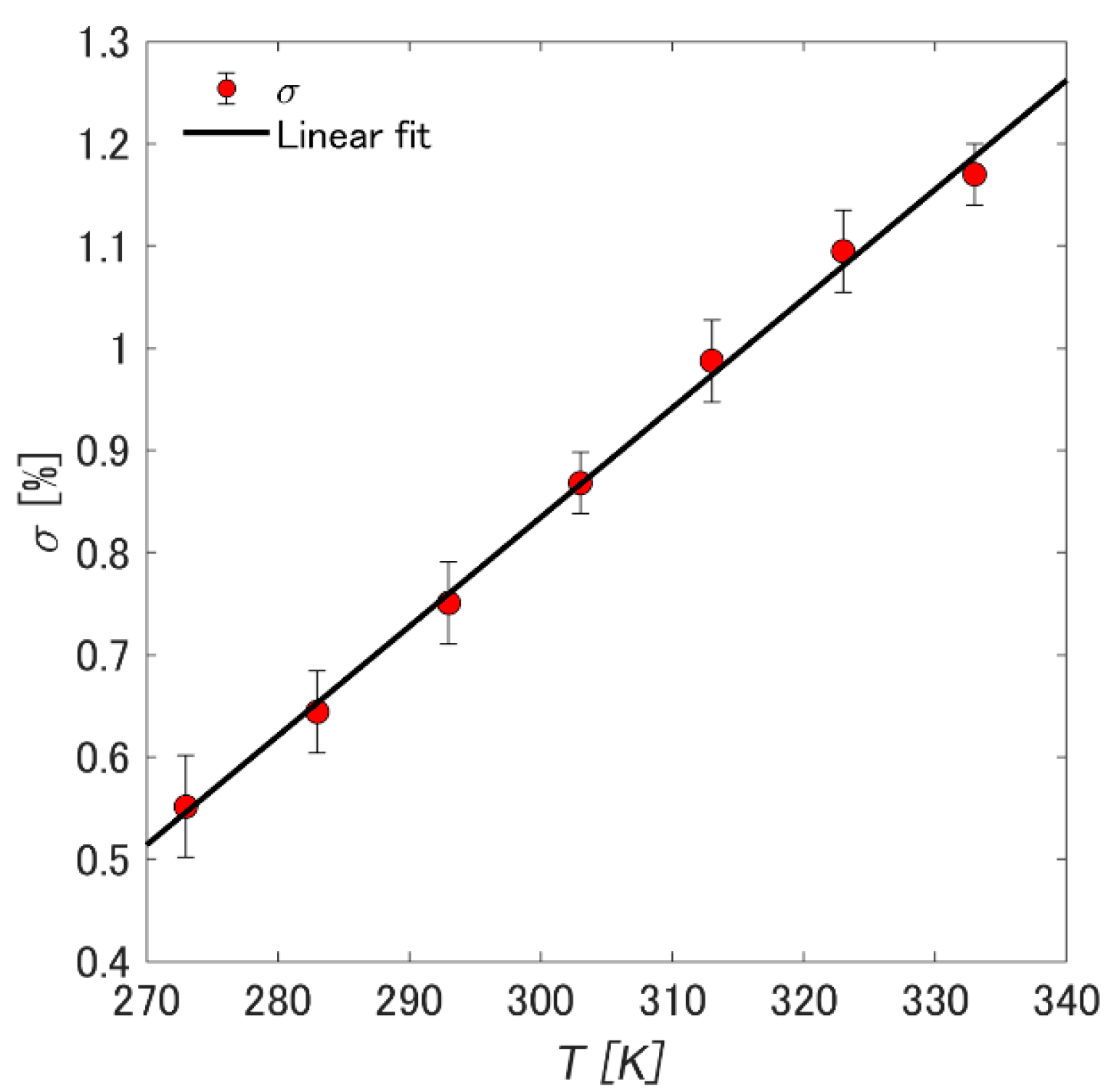 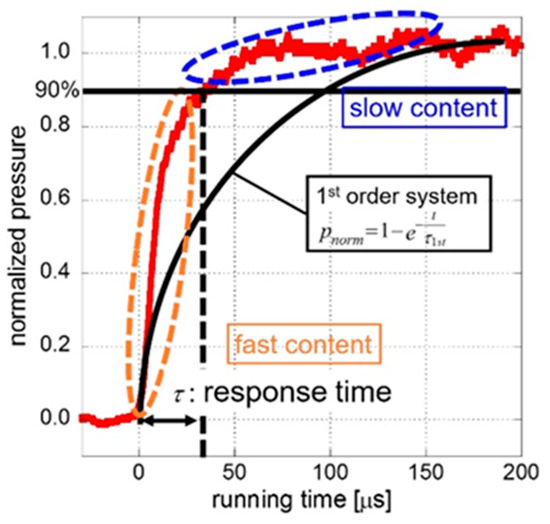 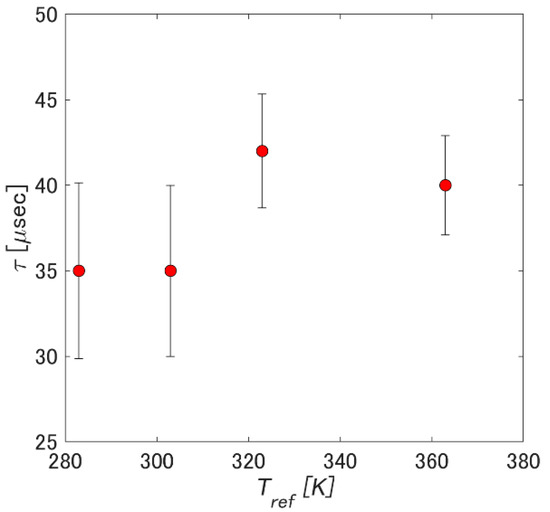 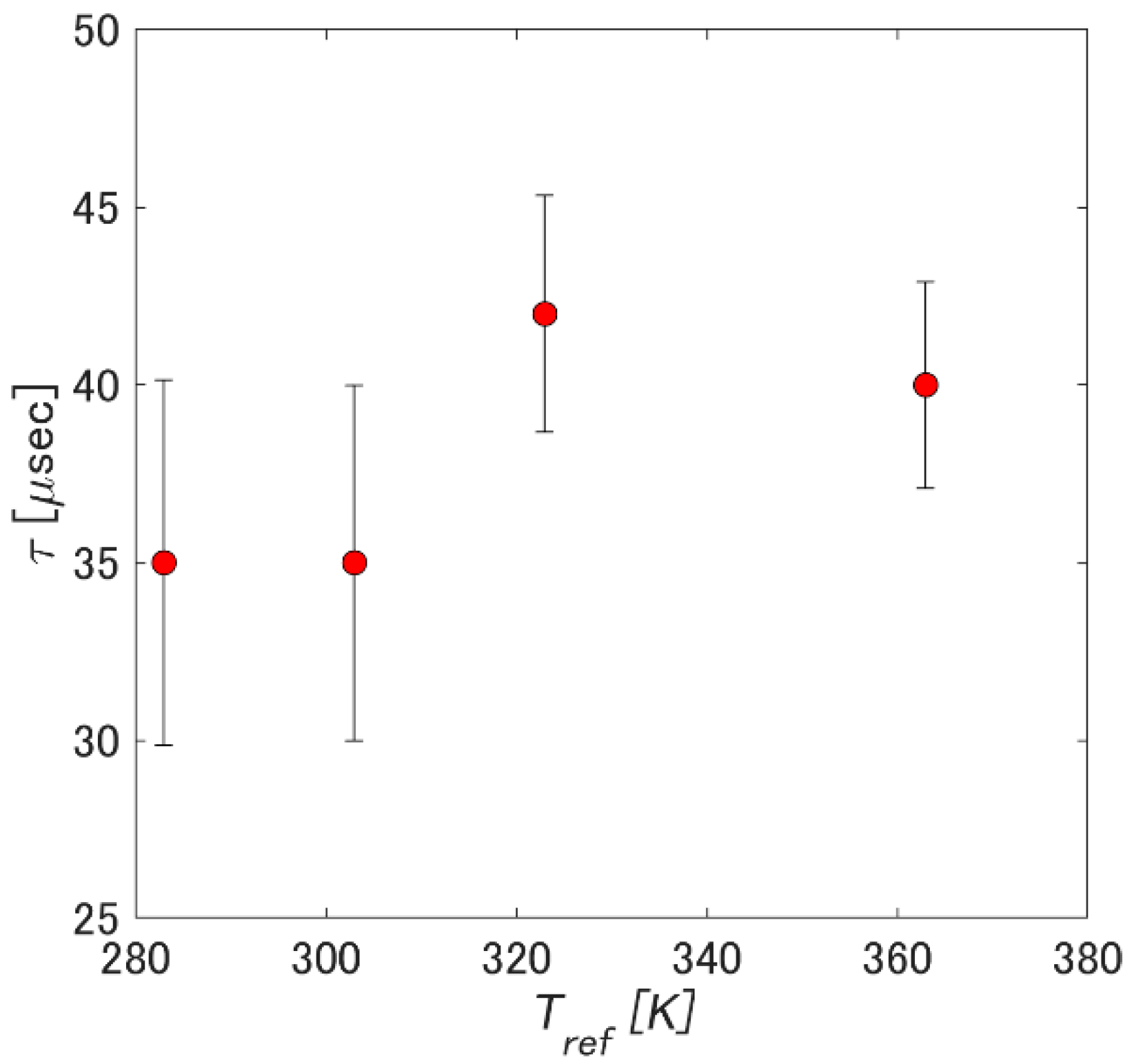 Table 1. Temperature effect on the PC-PSP characteristics.
Table 1. Temperature effect on the PC-PSP characteristics.
© 2020 by the authors. Licensee MDPI, Basel, Switzerland. This article is an open access article distributed under the terms and conditions of the Creative Commons Attribution (CC BY) license (http://creativecommons.org/licenses/by/4.0/).
We use cookies on our website to ensure you get the best experience. Read more about our cookies here.
Accept
We have just recently launched a new version of our website. Help us to further improve by taking part in this short 5 minute survey here. here.
Never show this again