Air transportation is especially critical to the immediate response that must be provided after a natural disaster strikes a region. Airport operations are hindered by fluctuating waiting times across different operation types because of bottlenecks caused by unexpected amounts of aid goods, aircraft, and emergency workers. To address this problem, this study proposes a model for estimating the waiting time of an aircraft at an airport during the immediate response phase after a disaster. The proposed framework was developed by applying an open Jackson network with first-come first-served, priority, and mixed-queuing disciplines. These disciplines are compared through a numerical example based on data acquired from the Great East Japan Earthquake of 2011. The results indicate that the mixed-queuing discipline reduces the waiting time for higher-priority operators, with permissible waiting times for lower-priority operators. The results of this study reveal that various disaster response operations should be prioritized ahead of a natural disaster occurring, such that the waiting times for those operators involved in life-saving activities can be reduced. View Full-Text
Keywords: waiting time; open Jackson network; airport operation; disaster response; queuing discipline waiting time; open Jackson network; airport operation; disaster response; queuing discipline
►▼ Show Figures 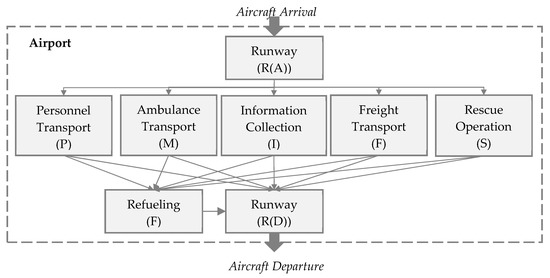