A Review of Concepts, Benefits, and Challenges for Future Electrical Propulsion-Based Aircraft
Previous Article in Journal

In this paper, a turbo-electric propulsion system was analyzed, and its performance was assessed. The aircraft considered here was a single-aisle, medium-range configuration targeting a capacity of 150 Pax. The propulsion concept comprised two boosted geared turbofan engines mounted under-wing. Those main engines were supported by an electrically driven aft-propulsor contributing to the thrust generation and by taking advantage of ingesting the boundary layer of the fuselage for potentially higher levels of propulsive efficiency and allowing for the improved operation of the main engines. The performance assessment as carried out in the context of this paper involved different levels: Firstly, based on the reference aircraft and the detailed description of its major components, the engine performance model for both main engines, as well as for the electrically driven aft-propulsor was set up. The methodology, as introduced, has already been applied in the context of hybrid-electric propulsion and allowed for the aforementioned aircraft sizing, as well as the subsequent gas turbine multi-point synthesis (simulation). A geared turbofan architecture with 2035 technology assumptions was considered for the main engine configuration. The present trade study focused on the design and performance analysis of the aft-propulsor and how it affected the performance of the main engines, due to the electric power generation. In order to allow for a more accurate description of the performance of this particular module, the enhanced streamline curvature method with an underlying and pre-optimized profile database was used to design a propulsor tailored to meet the requirements of the aft propulsor as derived from the cycle synthesis and overall aircraft specification; existing design expertise for novel and highly integrated propulsors could be taken advantage of herein. The resulting performance characteristics from the streamline curvature method were then fed back to the engine performance model in a closely coupled approach in order to have a more accurate description of the module behavior. This direct coupling allowed for enhanced sensitivity studies, monitoring different top-level parameters, such as the thrust/power split between the main engines and the aft propulsor. As a result, different propulsor specifications and fan designs with optimal performance characteristics were achieved, which in return affected the performance of all subsystems considered. View Full-Text
Keywords: turbofans; civil aviation; turbo-electric propulsion; boundary layer ingestion (BLI); multi-point gas turbine synthesis; propulsor design; streamline curvature turbofans; civil aviation; turbo-electric propulsion; boundary layer ingestion (BLI); multi-point gas turbine synthesis; propulsor design; streamline curvature
►▼ Show Figures 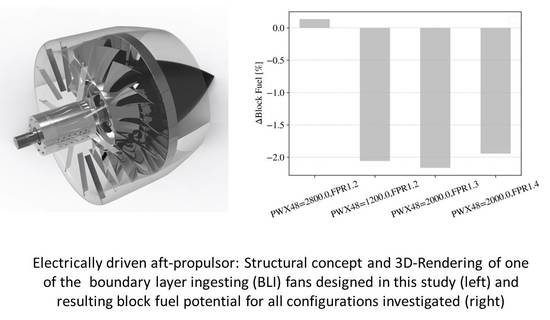