The quantitative measure of dissipative properties of different numerical schemes is crucial to computational methods in the field of aerospace applications. Therefore, the objective of the present study is to examine the resolving power of Monotonic Upwind Scheme for Conservation Laws (MUSCL) scheme with three different slope limiters: one second-order and two third-order used within the framework of Implicit Large Eddy Simulations (ILES). The performance of the dynamic Smagorinsky subgrid-scale model used in the classical Large Eddy Simulation (LES) approach is examined. The assessment of these schemes is of significant importance to understand the numerical dissipation that could affect the accuracy of the numerical solution. A modified equation analysis has been employed to the convective term of the fully-compressible Navier–Stokes equations to formulate an analytical expression of truncation error for the second-order upwind scheme. The contribution of second-order partial derivatives in the expression of truncation error showed that the effect of this numerical error could not be neglected compared to the total kinetic energy dissipation rate. Transitions from laminar to turbulent flow are visualized considering the inviscid Taylor–Green Vortex (TGV) test-case. The evolution in time of volumetrically-averaged kinetic energy and kinetic energy dissipation rate have been monitored for all numerical schemes and all grid levels. The dissipation mechanism has been compared to Direct Numerical Simulation (DNS) data found in the literature at different Reynolds numbers. We found that the resolving power and the symmetry breaking property are enhanced with finer grid resolutions. The production of vorticity has been observed in terms of enstrophy and effective viscosity. The instantaneous kinetic energy spectrum has been computed using a three-dimensional Fast Fourier Transform (FFT). All combinations of numerical methods produce a spectrum at , and near the dissipation peak, all methods were capable of predicting the slope accurately when refining the mesh.
Keywords: large eddy simulation; Taylor–Green vortex; numerical dissipation; modified equation analysis; truncation error; MUSCL; dynamic Smagorinsky subgrid-scale model; kinetic energy dissipation large eddy simulation; Taylor–Green vortex; numerical dissipation; modified equation analysis; truncation error; MUSCL; dynamic Smagorinsky subgrid-scale model; kinetic energy dissipation

This section is devoted to the discussion of the dynamics of the Taylor–Green vortex. The flow topology is investigated qualitatively on the basis of the results obtained using the third-order MUSCL scheme with the Kim and Kim slope limiter [24] and a grid size of cells. The flow is visualized using isosurfaces of a constant Q-criterion (see Figure 2). M3-KK is representative of all the other schemes that will generate similar contours, and the kinetic energy is represented in a dimensionless form in Figure 2. The eight-fold symmetry of the Taylor–Green vortex is clearly visible in Figure 2a, where the initial two-dimensional vorticity field features a symmetry in all planes located at a distance in the computational domain. No signs of vorticity are predicted at the intersection of the symmetry planes, and the highest vorticity magnitude values were predicted at the centre of the large structures represented by Q-criterion isosurfaces as described in the study carried out by Brachet et al. [20].
When the flow evolves, the vortices begin there descent to the symmetry planes, and vortex sheets are generated, as shown in Figure 2b. At this time stage, the flow starts to become under-resolved, and the kinetic energy can no longer be preserved. As the flow evolves more, the vortex sheet undergoes an instability and loses its coherent structure as presented in Figure 2c. After the disintegration of the vortex sheet due to the instability that was observed at earlier stages, the dynamics of TGV are governed by the interactions of small-scale structures of vorticity that are generated due to vortex stretching characterised by vortex tearing and re-connection. At late stages represented in Figure 2e, the flow becomes extremely disorganized, has no memory of the initial condition that was imposed and the symmetry is no longer maintained. Hence, the symmetry-breaking property that characterizes a numerical scheme is well observed by investigating the TGV flow topology, since the flow starts with a symmetry and ends up non-symmetric. At very late stages, the worm-like vortices fade away (see Figure 2f), and this behaviour is very similar to homogeneously decaying turbulence.

The present research work was financially supported by the Centre for Computational Engineering Sciences at Cranfield University under Project Code EEB6001R. The authors would like to acknowledge the IT support and the use of the High Performance Computing (HPC) facilities at Cranfield University, U.K. We would like to acknowledge the constructive comments of the reviewers of the Aerospace journal. 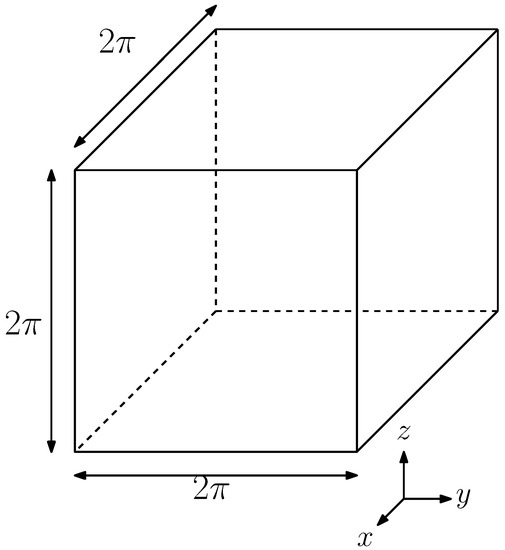 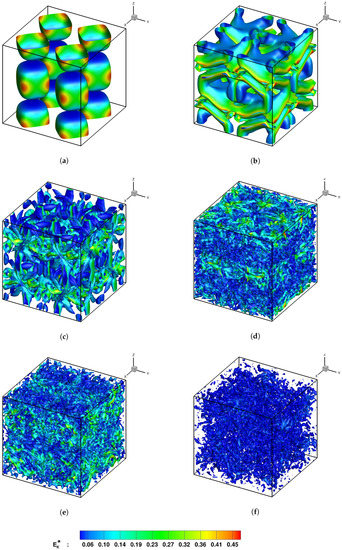