The Role of Individual and Small-Area Social and Environmental Factors on Heat Vulnerability to Mortality Within and Outside of the Home in Boston, MA

Climate change is resulting in heatwaves that are more frequent, severe, and longer lasting, which is projected to double-to-triple the heat-related mortality in Boston, MA if adequate climate change mitigation and adaptation strategies are not implemented. A case-only analysis was used to examine subject and small-area neighborhood characteristics that modified the association between hot days and mortality. Deaths of Boston, Massachusetts residents that occurred from 2000–2015 were analyzed in relation to the daily temperature and heat index during the warm season as part of the case-only analysis. The modification by small-area (census tract, CT) social, and environmental (natural and built) factors was assessed. At-home mortality on hot days was driven by both social and environmental factors, differentially across the City of Boston census tracts, with a greater proportion of low-to-no income individuals or those with limited English proficiency being more highly represented among those who died during the study period; but small-area built environment features, like street trees and enhanced energy efficiency, were able to reduce the relative odds of death within and outside the home. At temperatures below current local thresholds used for heat warnings and advisories, there was increased relative odds of death from substance abuse and assault-related altercations. Geographic weighted regression analyses were used to examine these relationships spatially within a subset of at-home deaths with high-resolution temperature and humidity data. This revealed spatially heterogeneous associations between at-home mortality and social and environmental vulnerability factors. View Full-Text
Keywords: heat-related mortality; built environment; urban resilience; extreme heat; climate change; urban heat island heat-related mortality; built environment; urban resilience; extreme heat; climate change; urban heat island
►▼ Show Figures 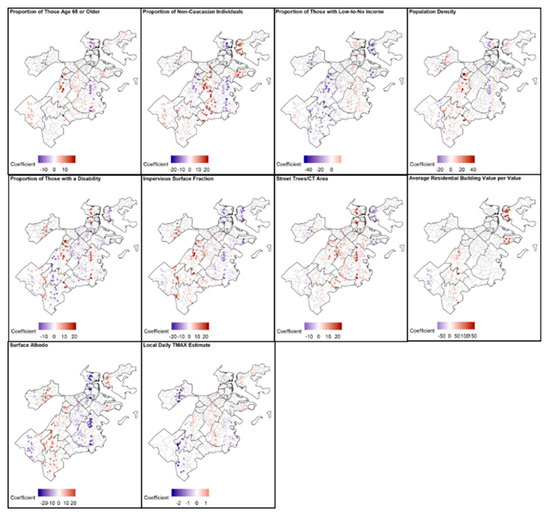 
Williams AA, Allen JG, Catalano PJ, Spengler JD. The Role of Individual and Small-Area Social and Environmental Factors on Heat Vulnerability to Mortality Within and Outside of the Home in Boston, MA. Climate. 2020; 8(2):29. https://doi.org/10.3390/cli8020029