SI: Survivability under Overheating: The Impact of Regional and Global Climate Change on the Vulnerable and Low-Income Population
Previous Article in Special Issue

Impact of Climate and Land Use/Land Cover Change on the Water Resources of a Tropical Inland Valley Catchment in Uganda, East Africa

How Do Floods and Drought Impact Economic Growth and Human Development at the Sub-National Level in India?

This paper tries to shift the focus of research on the impact of natural disasters on economic growth from global and national levels to sub-national levels. Inadequate sub-national level information is a significant lacuna for planning spatially targeted climate change adaptation investments. A fixed-effect panel regression analyses of 19 states from 2001 to 2015 assess the impacts of exposure to floods and droughts on the growth of gross state domestic product (GSDP) and human development index (HDI) in India. The flood and drought exposure are estimated using satellite data. The 19 states comprise 95% of the population and contribute 93% to the national GDP. The results show that floods indeed expose a large area, but droughts have the most significant impacts at the sub-national level. The most affected GSDPs are in the non-agriculture sectors, positively by the floods and negatively by droughts. No significant influence on human development may be due to substantial investment on mitigation of flood and drought impacts and their influence on better income, health, and education conditions. Because some Indian states still have a large geographical area, profiling disasters impacts at even smaller sub-national units such as districts can lead to effective targeted mitigation and adaptation activities, reduce shocks, and accelerate income growth and human development. View Full-Text
Keywords: floods; droughts; gross domestic product; HDI; satellite data; states; India floods; droughts; gross domestic product; HDI; satellite data; states; India
►▼ Show Figures 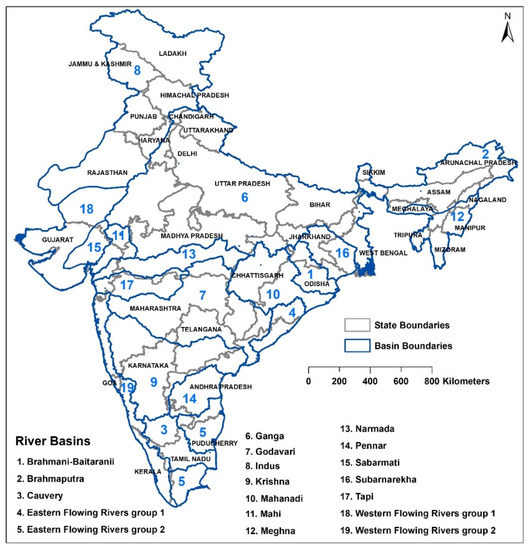 Amarasinghe, U.; Amarnath, G.; Alahacoon, N.; Ghosh, S. How Do Floods and Drought Impact Economic Growth and Human Development at the Sub-National Level in India? Climate 2020, 8, 123.


Amarasinghe U, Amarnath G, Alahacoon N, Ghosh S. How Do Floods and Drought Impact Economic Growth and Human Development at the Sub-National Level in India? Climate. 2020; 8(11):123.