Staying Cool in A Warming Climate: Temperature, Electricity and Air Conditioning in Saudi Arabia
Next Article in Special Issue

The failure to acknowledge and account for environmental externalities or spillovers in climate change adaptation policy, advocacy, and programming spaces exacerbate the risk of ecological degradation, and more so, the degradation of land. The use of unsuitable water sources for irrigation may increase salinisation risks. However, few if any policy assessments and research efforts have been directed at investigating how farmer perceptions mediate spillovers from the ubiquitous irrigation adaptation strategy. In this study, the cognitive failure and/or bias construct is examined and proposed as an analytical lens in research, policy, and learning and the convergence of disaster risk reduction and climate change adaptation discourses. A cross-sectional survey design and multistage stratified sampling were used to collect data from 69 households. To elicit the environmental impacts of irrigation practices, topsoil and subsoils from irrigated and non-irrigated sites were sampled and analysed using AAS (atomic absorption spectrophotometer). A generalised linear logistic weight estimation procedure was used to analyse the perception of risks while an analysis of variance (ANOVA) was used to analyse changes in exchangeable sodium percentage (ESP). The findings from small-scale farmers in Machakos and Kakamega counties, Kenya, suggest multifaceted biases and failures about the existence and importance of externalities in adaptation planning discourses. Among other dimensions, a cognitive failure which encompasses fragmented approaches among institutions for use and management of resources, inadequate policy. and information support, as well as the poor integration of actors in adaptation planning accounts for adaptation failure. The failures in such human–environment system interactions have the potential to exacerbate the existing vulnerability of farmer production systems in the long run. The findings further suggest that in absence of risk message information dissemination, education level, farming experience, and information accumulation, as integral elements to human capital, do not seem to have a significant effect on behaviour concerning the mitigation of environmental spillovers. Implicitly, reversing the inherent adaptation failures calls for system approaches that enhance coordinated adaptation planning, prioritise the proactive mitigation of slow-onset disaster risks, and broadens decision support systems such as risk information dissemination integration, into the existing adaptation policy discourses and practice. View Full-Text
Keywords: adaptation failure; adaptation planning; economic interests; climate change; ecosystem spillovers; policy; risk perception; transformation adaptation failure; adaptation planning; economic interests; climate change; ecosystem spillovers; policy; risk perception; transformation
►▼ Show Figures 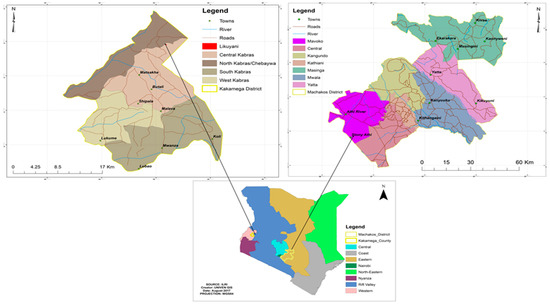