Grapevine and Ozone: Uptake and Effects

The grapevine (Vitis vinifera, L.) has been long since recognized as an ozone-sensitive plant. Ozone molecules can penetrate grapevine leaf tissues when the concentration of ozone in the atmosphere is high due to air pollution. This causes cell damage and interferes with photosynthetic mechanisms, subsequently slowing down plant growth and resulting in premature leaf senescence. Secondary effects include changes in biochemical processes that affect the chemical composition of the must and are likely to alter the quality of the wine. An experiment was conducted during two grapevine-growing seasons in 2010 and 2011 to gain knowledge of the effect of high ozone levels on the yield and on several biochemical characteristics of the plant which could influence the quality of the final product. These factors are economically important for agricultural production; this is especially true for Italy, which is one of the largest wine producers worldwide. The method used was a facility consisting of open top chambers operated at a vineyard in Angera (northern Italy). This facility permitted the study of the effects of different ozone levels. At the end of the experiment, the grapes were weighed and chemical analyses were carried out in order to understand the effects of ozone on the different characteristics of the grapes and on concentrations of several of its chemical substances. In particular, concentrations of yeast assimilable nitrogen, degrees Brix, pH, tartaric and malic acids, and polyphenols, including resveratrol, were considered, as these influence the quality of the wine. Parameters characterizing the different ozone levels were expressed in terms of ozone exposure (AOT40) and phytotoxic ozone dose (POD). The results showed that high ozone levels affect grapevine weight and thus its yield. In addition, the quality of the wine is affected by reductions of polyphenols which diminish the nutritional benefits of the product. In addition, these reductions cause the wine to have a more aggressive taste. These results emphasize the practical importance of the present study. View Full-Text
Keywords: ozone uptake; Vitis vinifera; open top chambers; ozone damage metrics; wine quality ozone uptake; Vitis vinifera; open top chambers; ozone damage metrics; wine quality
►▼ Show Figures 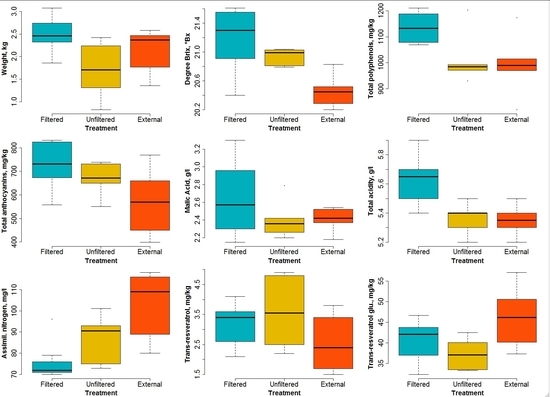