Breeding Buckwheat for Increased Levels of Rutin, Quercetin and Other Bioactive Compounds with Potential Antiviral Effects

Phosphoglycerate kinase (PGK, E.C. 2.7.2.3) interconverts ADP + 1,3-bisphospho-glycerate (1,3-bPGA) to ATP + 3-phosphoglycerate (3PGA). While most bacteria have a single pgk gene and mammals possess two copies, plant genomes contain three or more PGK genes. In this study, we identified five Pgk genes in the Zea mays var. B73 genome, predicted to encode proteins targeted to different subcellular compartments: ZmPgk1, ZmPgk2, and ZmPgk4 (chloroplast), ZmPgk3 (cytosol), and ZmPgk5 (nucleus). The expression of ZmPgk3 was highest in non-photosynthetic tissues (roots and cobs), where PGK activity was also greatest, consistent with a function in glycolysis. Green tissues (leaf blade and husk leaf) showed intermediate levels of PGK activity, and predominantly expressed ZmPgk1 and ZmPgk2, suggesting involvement in photosynthetic metabolism. ZmPgk5 was weakly expressed and ZmPgk4 was not detected in any tissue. Phylogenetic analysis showed that the photosynthetic and glycolytic isozymes of plants clustered together, but were distinct from PGKs of animals, fungi, protozoa, and bacteria, indicating that photosynthetic and glycolytic isozymes of plants diversified after the divergence of the plant lineage from other groups. These results show the distinct role of each PGK in maize and provide the basis for future studies into the regulation and function of this key enzyme. View Full-Text
Keywords: phosphoglycerate kinase; Zea mays; gene family; gene expression; phylogeny phosphoglycerate kinase; Zea mays; gene family; gene expression; phylogeny
►▼ Show Figures 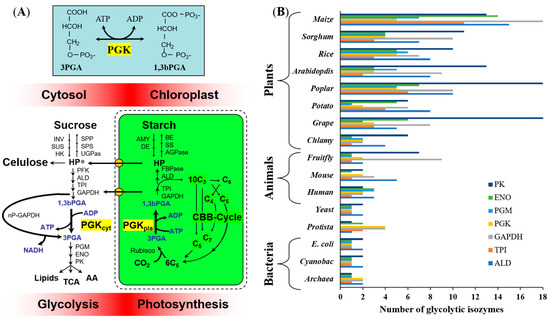