Arabinogalactan-Proteins from the Liverwort Marchantia polymorpha L., a Member of a Basal Land Plant Lineage, Are Structurally Different to Those of Angiosperms
Next Article in Special Issue

Interaction between Bean and Colletotrichum gloeosporioides: Understanding Through a Biochemical Approach

Brazil and Argentina have a combined soybean area of 53.6 million hectares, which accounts for over half of the total global production. The soybean crop in South America extends from latitude 8–10° S to 32–36° S. Such a vast, almost contiguous area imposes a serious sanitary risk to the crop. Currently, the prevalence of anthracnose is increasing, with recurring reports of severe epidemics and expressive yield losses. Soybean anthracnose is mainly associated with Colletotrichum truncatum, although other Colletotrichum species have also been reported as causal agents of this disease. Knowledge about the morphological, cultural, and molecular variability of C. truncatum in South America is crucial for disease management. Here, we present data on the molecular, morphological, biological, cultural, and pathogenicity of C. truncatum isolates collected in Brazil and Argentina. Light microscopy and randomly-amplified polymorphic DNA (RAPD) analysis were used for estimating the variability of isolates. Colletotrichum truncatum displayed three types of conidiogenesis, viz. conidial formation from conidiogenous cells on hyphal extremities, in conidiomas in acervuli, and directly from fertile setae (a mechanism yet-unreported for C. truncatum). RAPD profiling was effective in revealing the genetic diversity among C. truncatum isolates. The intra-group similarity was greater among the Argentinian isolates when compared to the Brazilian group. Furthermore, the results indicated a strong correlation between geographical origin and molecular grouping, with the exclusive or semi-exclusive assembling of Brazilian and Argentinian isolates in distinct clades. Finally, a preliminary account of the reaction of soybean accessions to C. truncatum is also included. View Full-Text
Keywords: Colletotrichum; Glycine max; RAPD; genetic diversity Colletotrichum; Glycine max; RAPD; genetic diversity
►▼ Show Figures 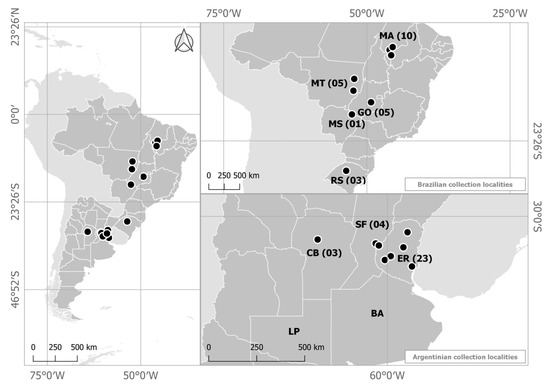