Potato (Solanum tuberosum L.) is the leading tuber crop [1], with beneficial nutritional impact [2,3], but is very sensitive in terms of food security [4,5]. Potato is grown in relatively cool climates and is sensitive to drought [6] due to its shallow root system [7], moderately tolerant to salinity, although highly sensitive during tubers formation [8,9]. Globally, desertification and salinization are currently affecting about 10% of arable land, which decrease yield more than 50% in major crops [10,11]. Salinity and drought interrupt many physiological and biochemical processes, causing osmotic and oxidative stress, ion imbalance, mineral deficiency, and ion toxicity problems [12]. Hence, understanding of plant tolerance to drought and salinity is a critical research topic [13].
One of the major signatures of abiotic stress leading to yield reduction is the overproduction of reactive oxygen species (ROS) [14]. These ROS include superoxide anions (O2•−), hydrogen peroxide (H2O2), singlet oxygen (1O2), and hydroxyl radicals (OH•), which can be damaging and cause different physiological, molecular, and biochemical responses [15]. ROS are also vital signaling molecules that alert plants to adjust their metabolism [16] to adapt to adverse environments. Additionally, production of secondary metabolites like phenols, flavonoids, tannins, saponins, and anthocyanin have been reported in different plant species under abiotic stresses [17]. These alterations may be positive or negative depending on many factors, such as plant species, developmental stage, and stress duration [18].
In response to stress, plants adopt defense strategies such as: ion homeostasis, activation of antioxidant enzymes, and production of different organic compatible solutes [19,20]. Plants tolerant to abiotic stresses can be identified by applying selective agents such as NaCl (for salinity), PEG, or mannitol (for drought) [19]. Lithium (Li), an analogue of sodium, has been used elsewhere for studying ionic toxicity under saline conditions [21]. Successful in vitro selection for drought and salt tolerance using different selection agents has been applied to crops, including potato [12]. As a low tolerance to salinity and drought are major limitations to potato cultivation, development of stress-tolerant varieties is important to enhance crop productivity [19].
Metabolomics is one of the developing “omics” techniques critical to the study of abiotic stress tolerance of crops [22]. It aims to decode, by metabolite determination, the probable effect of abiotic stresses on all dynamic biochemical processes of plant cells [23]. Metabolomics techniques such as gas chromatography-mass spectrometry (GC-MS) are useful to identify, assess, and evaluate the response of important metabolites [24]. In plant abiotic stress research, an important aim is to examine particular metabolites that are critical in tolerance and metabolic variations leading to different responses [25,26]. Different metabolomics approaches have been used to investigate salinity stress in crops, including barley, tomato, maize, and wheat [27,28,29]. Similarly, for drought tolerance, metabolites profiling of various crops such as soybean, barley, wheat, and rice, have been recorded [30,31,32,33,34].
Plant tissue culture approaches can be applied to pinpoint characteristics, and to simplify abiotic stresses experiments in a controlled environment. In vitro techniques can also be used to activate genes already present in plant genome via epigenetic changes [35]. The study presented here screened two potato cultivars: ‘BARI-401’ (red skin) and ‘Spunta’ (yellow skin), for osmotic and ionic stress responses, by in vitro culture using Murashege and Skooge (MS) medium [36], supplemented with 20 mM LiCl and 150 mM mannitol. These experiments may help to identify genotypes with improved ionic and osmotic tolerance less expensively and more time effectively than open field trials [37]. Hence, this work aims to explore the performance of these cultivars by using different selective agents for ionic (LiCl) and osmotic (mannitol) stress response assessed by metabolomics finger printing and biochemical analysis.

2.1. Biochemical Analysis under Different Levels of LiCl and Mannitol

2.2. Changes in Metabolite Profile Induced by LiCl and Mannitol Exposure

A total of 66% of variance was explained by the two principal components (Dimensions, PC) of six treatment variables: 20 mM LiCl (BARI-401 Li.1 and Spunta Li.2), 150 mM Mannitol (BARI-401 Ma.1 and Spunta Ma.2), and 2 controls (BARI-401 C.V1 and Spunta C.V2) (Figure 5). Four treatment variables: Li.1, Ma.1, Li.2, and Ma.2, are correlated positively with one another. As shown in Figure 5, the arrows of these variables are clustered together, indicating positive correlation. However, these four variables were independent from C.V1 and C.V2.

4.1. In Vitro Potato Plantlets Growth and Treatment with LiCl and Mannitol

Potato fresh shoots (2 g/sample) were selected randomly and extraction was done as per Awad et al. [51]. 20 mL of 80% methanol was mixed with sample and shaken at 150 rpm for 12 h, then was filtered with Whatman® filter paper No. 1 at room temperature.

The TPC was measured following Hoff and Singleton’s [97] protocol. A mixture of 50 µL methanolic extract, 100 µL of Folin-Ciocalteu reagent, and 850 µL of methanol was prepared and kept at 23 + 1 °C for 5 min. Sodium carbonate (20% w/v) was then added to the mixture and left for 30 min to react. TPC absorbency was measured at 750 nm. Results were expressed in g.kg−1 fresh weight (FW) Gallic acid equivalent after quantification from the calibration curve obtained from gallic acid absorbance at known concentrations.

The TFC was measured by a revised colorimetric method as described by Zhishen et al. [98]. 250 µL of methanolic extract was mixed with 1.25 mL of water and 75 µL of 5% w/v NaNO2. The solution was held for 6 min before mixing with 150 µL 10% w/v AlCl3, 0.5 mL NaOH (1 M), and 275 µL distilled water. Absorbance at 510 nm was recorded for total flavonoids. The calibration curve was obtained from the absorbance of known concentrations of catechin for quantification of total flavonoids and the results were given as g.kg−1 FW catechin equivalent.

Methanolic extract of in vitro potato shoots were analyzed for free radical scavenging activity in DPPH (1,1-diphenyl-2-picrylhy-drazyl) methanol [42]. 0.1 mL of methanolic extract and 0.9 mL of fresh DPPH methanol solution (0.1 mM) were mixed. As a control, the same quantity of methanol was used. After dark incubation at room temperature for 30 min, the absorbance was noted at 517 nm. Percent scavenging activity was calculated by the following formula:
The dose response curves were used to calculate IC50 (inhibition concentration) values.

Polyphenol oxidase (EC 1.14.18.1) activity was examined by catechol substrate following the methodology of Jiang et al. [100]. 200 µL of crude extract was mixed with 2800 µL of catechol (20 mM) solution in 0.01 M sodium phosphate buffer (pH 6.8). An absorbance increase at 400 nm was recorded over 3 min. Results are expressed as per unit activity of enzyme required for 0.1 O.D. min−1 change under standard assay conditions.

Shoot samples were prepared for metabolite analysis following the method of Roessner et al. [60]. Three independent biological replicates were prepared from each treatment (mannitol, LiCl, and control) for both cultivars (18 samples total). Shoots were harvested, snap-frozen in liquid nitrogen, and stored at −80 °C. 100 mg of frozen sample was ground by mortar and pestle into a fine powder in liquid nitrogen and extracted in 1.4 mL methanol.
Due to constraints, only one biological/technical replicate of each cultivar and treatment combination was examined by GC-MS. Sample methanol extracts (1 µL) were injected with an automatic sampler and separated on a QP2010 plus series GC fixed with a split/splitless injector port and determined with a FID QP 2010 plus mass selective detector. Rtx 5 ms 0.25 mm ID (column) and 0.25 µm film thickness (df) (Shimadzu, Japan) was used to perform GC. The injector temperature was 250 °C and the flow rate of helium carrier gas was at 1 mL.min−1. Ion source temperature was 210 °C and interface temperature was kept at 250 °C. Temperature of the oven was at isothermal 60 °C for five minutes followed by a stepwise rise at 5 °C.min−1 until the oven temperature touched 300 °C and held for a further minute. Before the next injection, temperature was equilibrated at 60 °C for 6 min. At 3 scans.s−1, mass spectra were recorded in the 50–500 m/z range. Peaks were identified by the automated mass spectral deconvolution and identification program (AMDIS) and the National Institute of Standards and Technology (NIST library, version v. 2.0 f).

For the experiment, a completely randomized design (CRD) was used, with two varieties and three treatments: MS medium (control), MS with 20 mM LiCl, and MS with 150 mM mannitol. Three biological replications were conducted per treatment. The results were analyzed by analysis of variance (ANOVA) using Python (version 3.6.3). The Tukey-Kramer HSD test was used to separate the differences between treatments at probability level p ≤ 0.05. Moreover, to examine the relationships between the six different variables, principal component analysis (PCA) was performed by R studio (version 1.2.5033) software. Scripts used in analysis available via Github (https://github.com/gbwellman/2020PotatoGCMSanalysis). Venn diagrams were generated using the online tool provided by Ghent University, Bioinformatics and Evolutionary genomics group (http://bioinformatics.psb.ugent.be/webtools/Venn/).

This study examined the response of two potato cultivars to ionic and osmotic stress in vitro. The results discussed above indicate that Spunta shows a greater response to ionic and osmotic stress than BARI-401 by increased POD/PPO activity, reduced ROS production, trehalose accumulation, and increased saturated fatty acids composition. The interplay between TPC and free radical scavenging activity in BARI-401 and Spunta under mannitol stress needs further examination.
The GC-MS results identify multiple compounds that may be involved in stress responses or tolerance mechanisms and warrant further study. Further validation, both by in planta testing and growth under field conditions [101], is required to determine the impact of these differences on the abiotic stress tolerance of these two cultivars. The in vitro approach used in this study, with the novel insights provided by GC-MS, may be used as a preliminary trial prior to field evaluation [12,102]. Identification of traits correlated to increased ionic and osmotic tolerance, such as POD/PPO activity or trehalose accumulation, will allow this approach to rapidly screen potato genotypes to assist in selection and breeding of potato cultivars with improved tolerance.

This Ph.D. research work was supported by the Deanship of Graduate studies, King Abdulaziz University, Jeddah, and Ministry of Education, Kingdom of Saudi Arabia. This research received no external funding.

The authors are grateful to the Deanship of Graduate Studies (DGS), king Abdulaziz University, for endowment of the Ph.D. scholarship under student ID. No 1801819. Moreover, the authors acknowledge the moral and technical support from the Department of Arid Land Agriculture. 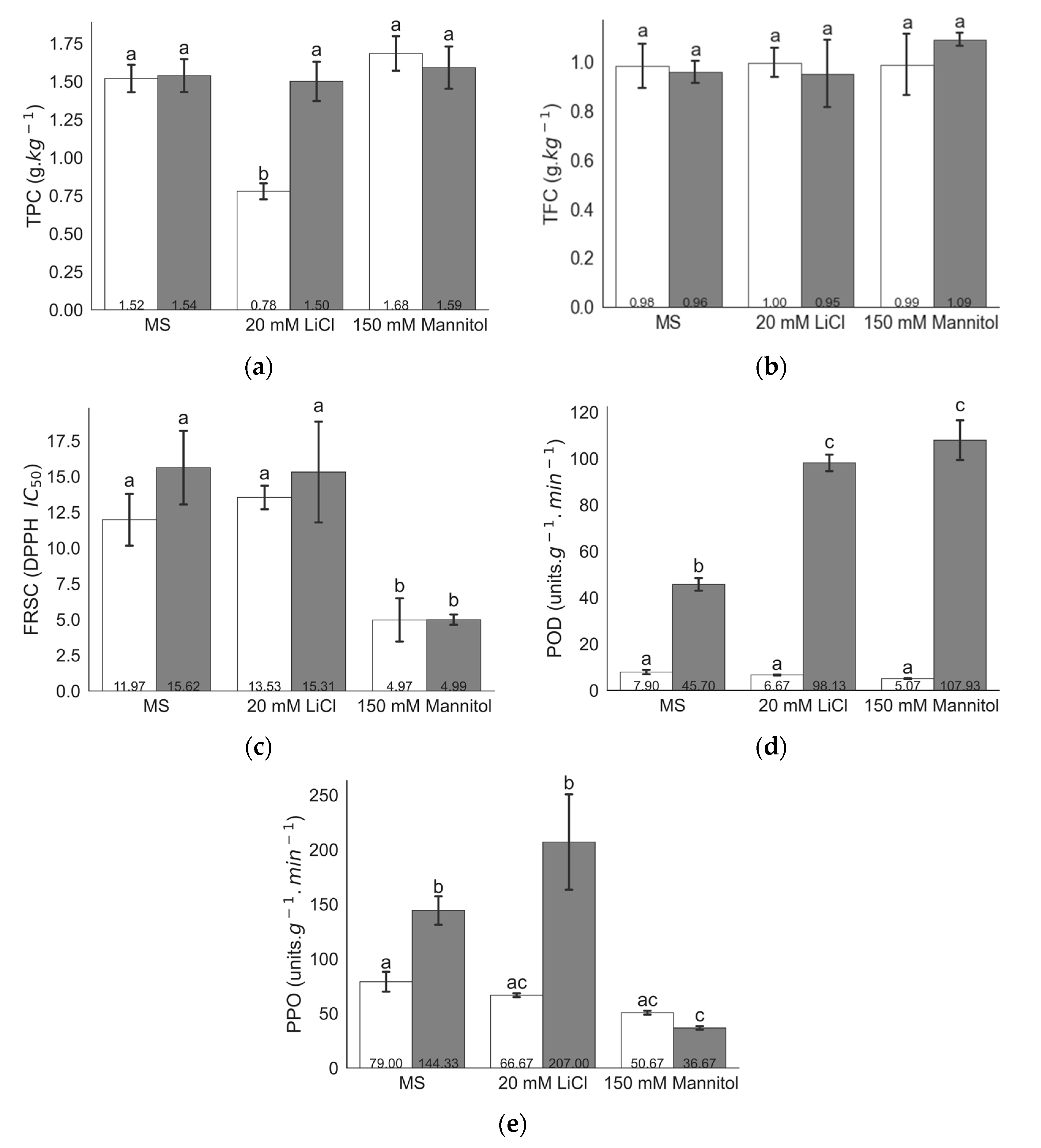 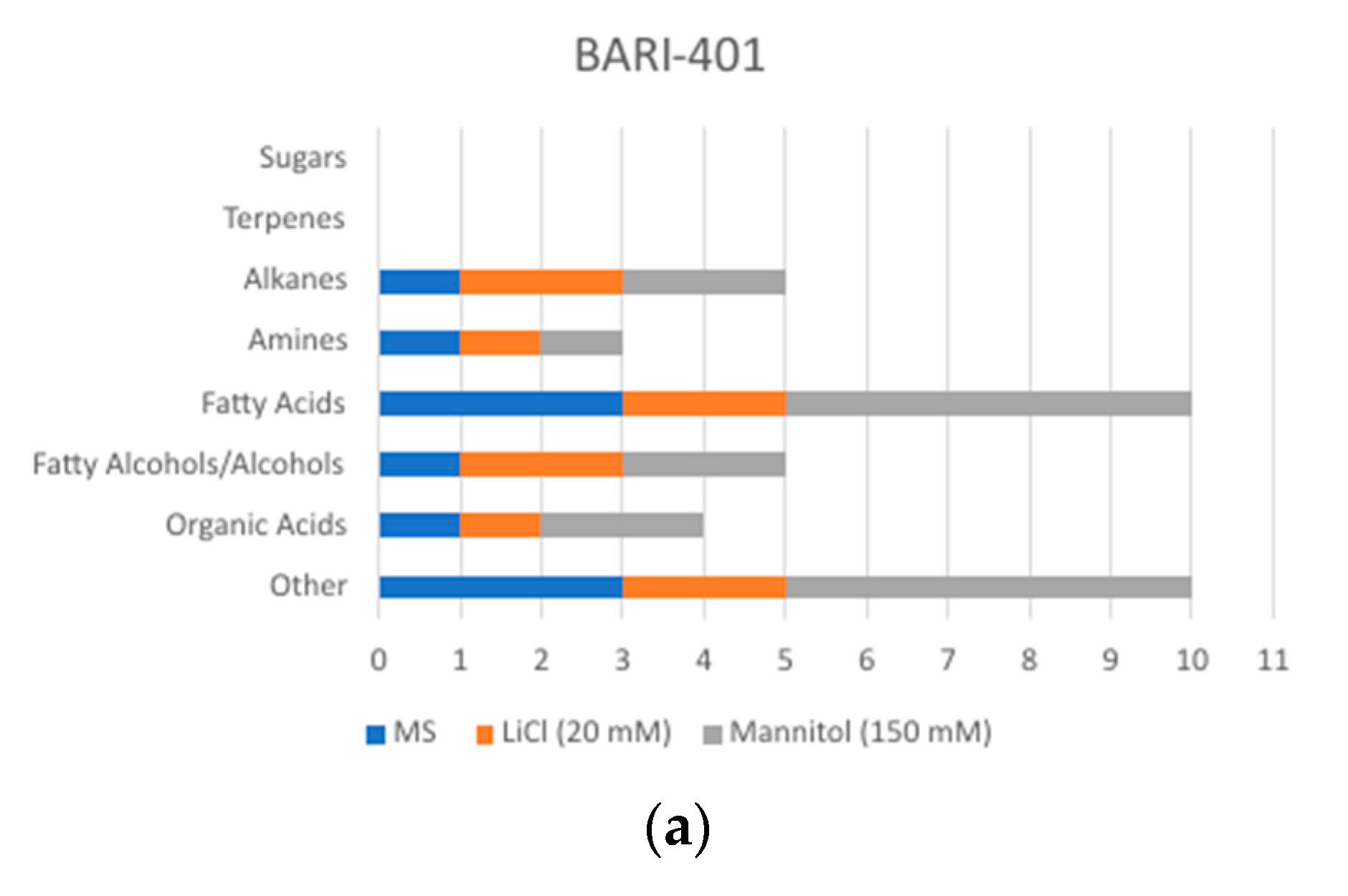 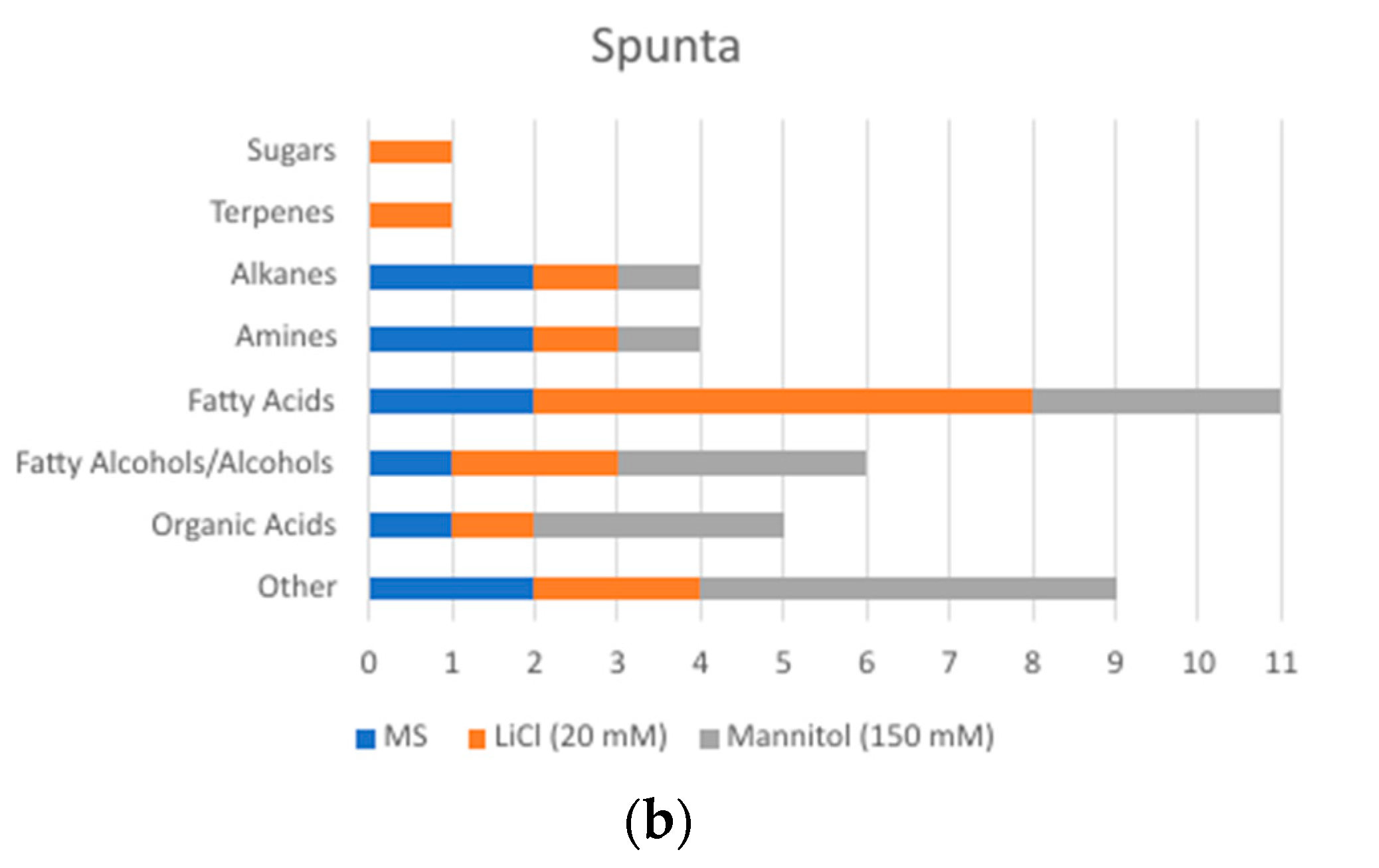 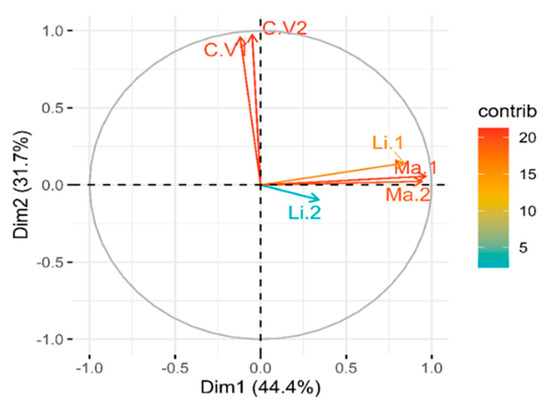 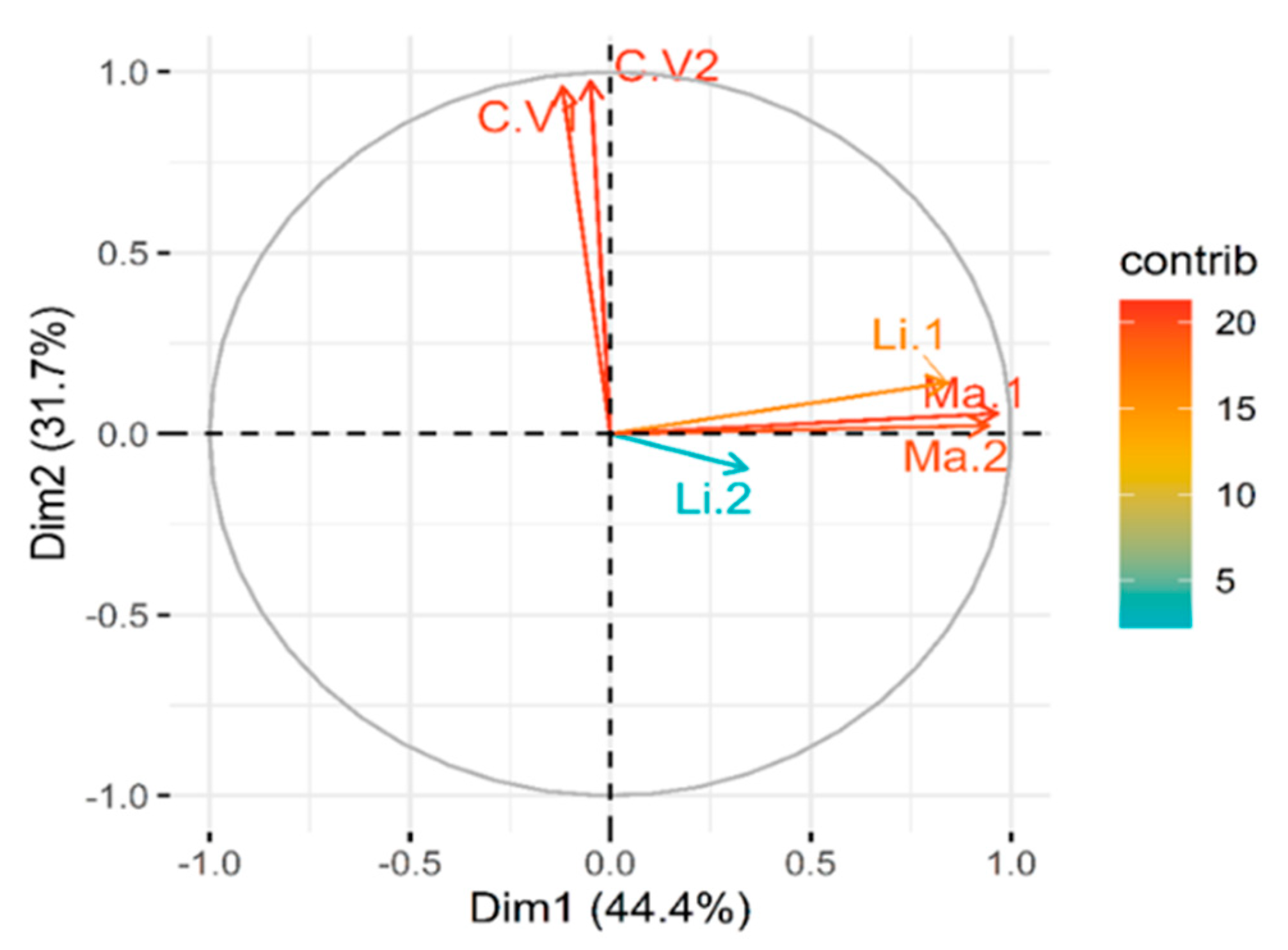