An Overview of Hox Genes in Lophotrochozoa: Evolution and Functionality
Previous Article in Journal

HoxA Genes and the Fin-to-Limb Transition in Vertebrates

HoxA genes encode for important DNA-binding transcription factors that act during limb development, regulating primarily gene expression and, consequently, morphogenesis and skeletal differentiation. Within these genes, HoxA11 and HoxA13 were proposed to have played an essential role in the enigmatic evolutionary transition from fish fins to tetrapod limbs. Indeed, comparative gene expression analyses led to the suggestion that changes in their regulation might have been essential for the diversification of vertebrates’ appendages. In this review, we highlight three potential modifications in the regulation and function of these genes that may have boosted appendage evolution: (1) the expansion of polyalanine repeats in the HoxA11 and HoxA13 proteins; (2) the origin of +a novel long-non-coding RNA with a possible inhibitory function on HoxA11; and (3) the acquisition of cis-regulatory elements modulating 5’ HoxA transcription. We discuss the relevance of these mechanisms for appendage diversification reviewing the current state of the art and performing additional comparative analyses to characterize, in a phylogenetic framework, HoxA11 and HoxA13 expression, alanine composition within the encoded proteins, long-non-coding RNAs and cis-regulatory elements. View Full-Text
Keywords: HoxA genes; transcriptional regulation; development; evolution; limb; fin HoxA genes; transcriptional regulation; development; evolution; limb; fin
►▼ Show Figures 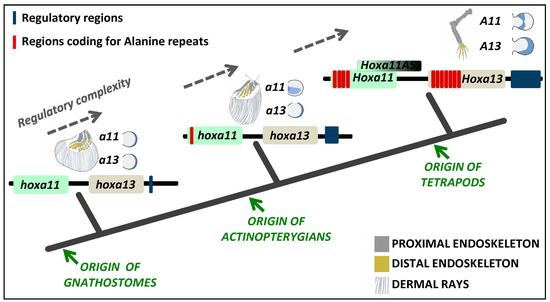