UTSM: A Trajectory Similarity Measure Considering Uncertainty Based on an Amended Ellipse Model

The agricultural spatial pattern in China is characterized by changes in climate and land resources. Figure 1 shows the nine agricultural zones in China with a backdrop of the Chinese land cover map. Considering the geographical differences in light, heat, water, and soil resources that are related to climate and terrain, the agricultural patterns in China were divided into Northeast China Plain (NE Plain), Yunnan–Guizhou Plateau (YG Plain), Northern arid and semiarid region (NAS Region), Southern China (SC), Sichuan Basin and surrounding regions (SBS Region), Middle-lower Yangtze Plain (MLY Plain), Qinghai Tibet Plateau (QT Plateau), Loess Plateau (L Plateau), and Huang-Huai-Hai Plain (HHH Plain) [47]. The density of population and human activities in these nine regions are different, and a combination of socioeconomic factors and natural geographical backgrounds forms different spatially heterogeneity regions. Given the differences in spatial distribution between socioeconomic factors and agricultural natural zones, this study detected socioeconomic drivers by analyzing the socioeconomic interactions in different regions.
The MODIS surface reflectance 8 day L3 Global 500 m SIN Grid products, based on both the Terra (MOD09A1) and Aqua (MYD09A1) platforms, were download from 2000 to 2017 from the USGS website (https://lpdaac.usgs.gov). The MOD09A1 and MYD09A1 data were composited to generate 500 meter surface reflectance on an 8 day basis based on the minimum-blue-compositing method. We used the cloud mask defined in the quality control data to find cloud-contaminated pixels and assigned a cloud flag if both Terra and Aqua observations were cloudy. The EVI time series dataset was calculated based on the 8 day surface reflectance composite data. The MODIS 8 day 1000 m land surface temperature product (MOD11A2) from 2000 to 2017 obtained from the USGS website (https://lpdaac.usgs.gov) and the 30 m land cover product of Globeland30 obtained from (http://www.globallandcover.com) were used to refine the final cropping intensity map.
The elevation, aspect, and slope data related to the arable land topography were derived from the NASA Shuttle Radar Topographic Mission (SRTM) digital elevation data at a 90 m spatial resolution (ftp://e0srp01u.ecs.nasa.gov/srtm/version2/SRTM3/).
The agricultural economic census data were collected from the China County Statistical Yearbook 2017 (County and City Volume) (http://data.stats.gov.cn) issued by the National Bureau of Statistics. The agricultural economic census data contained the basic census information for more than 2000 counties. The agricultural economic censuses were scrubbed with the administrative county boundary, and 2061 counties were selected. We selected the statistical indicators that were considered to be potential factors that could influence farmers’ planting habits, and these statistical indicators included household registration population, regional gross domestic product (GDP), gross product of industrial enterprises above a designated size, increased product in primary industry, increased product in the agricultural sector, the household balance of farmers’ savings and deposits, total agricultural machinery power, agricultural machinery power, total machinery harvest area, and total grain yield output [19,46,48].

Based on the socioeconomic data, we derived 13 statistical indexes as potential influential factors related to crop yield, agricultural machinery power, farmers’ income, and industrial developments. The 13 factors include grain yield (GY), grain yield per labor (GYlabour), arable land area per capita (ALAcaptita), agricultural machinery power per unit of arable land area (AMPALA), percentage of machinery harvest area in arable land area (PMHAALA), labor force per unit of arable land area (LFALA), terrain elevation (TE), terrain slope (TS), gross product of industrial enterprises above a designated size (GPIE), regional GDP(GDP), the growth rate of the percentage share of the agricultural sector in GDP (GRAG), the growth rate of the percentage share of primary industry sector in GDP (GRPIG), and farmers’ income per capita (FIcapita).
TE was directly extracted from the SRTM data, and TS was calculated from the SRTM data. Both TE and TS were averaged to the county level. The GPIE and GDP were obtained from the agricultural economic census data. The formulas used to derive the other indicators are in Table 1.
In this study, we conducted an analysis on the county level and used the average annual cropping intensity and/or its changes during 2001–2016 as the dependent variables. We classified the counties into three clusters for each individual potential factor as inputs to the Geo-Detector using the K-means clustering method. For example, we selected the GY values of three counties as the seed points and then clustered other GY values according to the shortest Euclidean distance between the GY value to be clustered and the seed GY. The cluster centers were adjusted by the minimum Euclidean distance in each cluster and the maximum Euclidean distance between clusters. After 100 iterations, the GY values were divided into three categories. The counties then were divided into three categories according their GY values’ clustering results.

4.1. The Spatiotemporal Patterns of the Cropping Intensity

5.1. Influential Factors and the PD Values

5.2. The Influence of the Factor Clustering Method on the Geo-Detector

5.3. The Interaction between Human Farming Activities and Rapid Socioeconomic Developments

Monitoring the spatial distribution of multiple cropping and its changes, as well as understanding the underlying driving factors, could support the development of the land use simulation model and decision-making for efficient farmland planning. Due to limitations in the available intensity dataset and comprehensive interactions between complex factors, few studies have focused on the cropping intensity changes under rapid socioeconomic development and the uncertainty of their driving forces. In this study, we analyzed the spatial patterns and changing trends of cropping intensity from 2001 to 2016 and used the Geo-Detector to analyze the socioeconomic driving forces that affect cropping intensity and its changes at the county level in nine major agricultural divisions in China. The results suggest that the annual cropping intensity in nine agricultural zones all increased from 2001 to 2016 under rapid socioeconomic development, and seven of them increased significantly. The cropping cycles that reflect cropping practices in the main regions did not change much, but fallow practices in western China decreased largely from 2001–2016. For example, there was a 23% reduction of fallow in the NAS regions, and a 51% reduction of fallow in the L Plateau.
When using the Geo-Detector to analyze the influential factors that determine the spatial distribution of cropping intensity, it was found that the output efficiency of cultivated lands has considerable impacts on cropping intensity in the plains, while topography is the most influential factor in mountainous areas. In addition, the results suggest that the factors that affect cropping intensity changes are mainly related to the output efficiency of cultivated lands in the northern region, while they are mainly related to regional economic developments in the southern region, but the factors that influence cropping intensity changes are not the same for each individual agricultural region. These results could provide a reference to the driving forces and underlying mechanism behind cropping intensity and its changes in China and also provide profound insight into sustainable policymaking for arable lands. In the plains of northern China, limited by climatic conditions, the government can implement a series of relevant policies to promote cropping intensity, such as improving arable land quality, increasing financial investment in agricultural technology research and development, and increasing financial investment in agricultural machinery. This arid and semiarid region still has room to increase cropping intensity, and the policies for improving the ecological environment by encouraging sustainable agriculture development are worth developing. Further, in the SC, agricultural-promoting policies and industrial production-promoting policies are mutually exclusive, so it will be necessary to develop some policies to achieve a win–win situation for both agricultural and industrial development. Hence, with scientific guidance from influencing factors and driving mechanisms in each agricultural zone, the development of agricultural policies will become more focused.

We thank anonymous reviewers for their constructive comments. 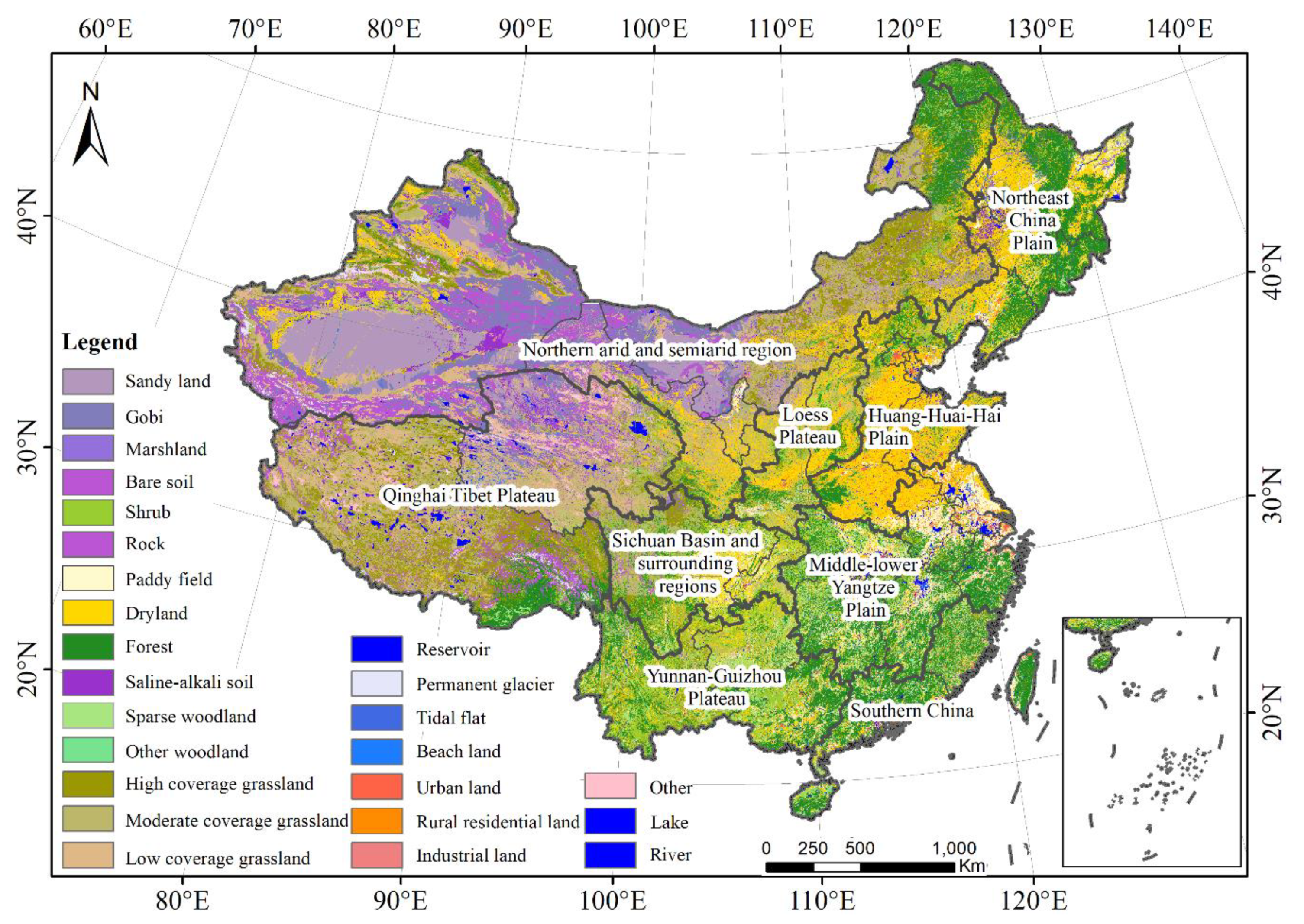 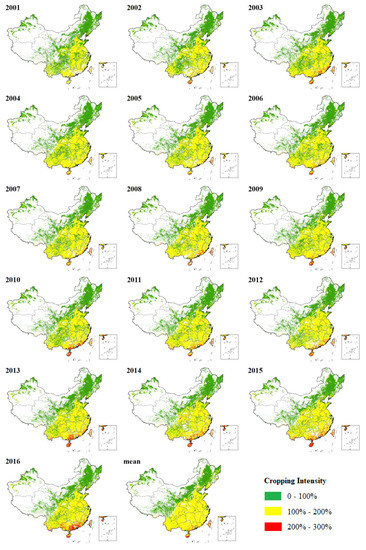