The Impact of Urban Inequalities on Monitoring Progress towards the Sustainable Development Goals: Methodological Considerations

There is much discussion regarding the Sustainable Development Goals’ (SDGs) capacity to promote inclusive development. While some argue that they represent an opportunity for goal-led alignment of stakeholders and evidence-based decision-making, other voices express concerns as they perceive them as a techno-managerial framework that measures development according to quantitatively defined parameters and does not allow for local variation. We argue that the extent to which the positive or negative aspects of the SDGs prevail depends on the monitoring system’s ability to account for multiple and intersecting inequalities. The need for sub-nationally (urban) representative indicators poses an additional methodological challenge—especially in cities with intra-urban inequalities related to socio-spatial variations across neighbourhoods. This paper investigates the extent to which the SDG indicators’ representativeness could be affected by inequalities. It does so by proposing a conceptual framing for understanding the relation between inequalities and SDG monitoring, which is then applied to analyse the current methodological proposals for the indicator framework of the “urban SDG,” Goal 11. The outcome is a call for (1) a more explicit attention to intra-urban inequalities, (2) the development of a methodological approach to “recalibrate” the city-level indicators to account for the degree of intra-urban inequalities, and (3) an alignment between methodologies and data practices applied for monitoring SDG 11 and the extent of the underlying inequalities within the city. This would enable an informed decision regarding the trade-off in indicator representativeness between conventional data sources, such as censuses and household surveys, and emerging methods, such as participatory geospatial methods and citizen-generated data practices. View Full-Text
Keywords: SDGs; urban inequality; urban governance; inclusive development; participatory geospatial methods; citizen-generated data; data practices; urban indicators SDGs; urban inequality; urban governance; inclusive development; participatory geospatial methods; citizen-generated data; data practices; urban indicators
►▼ Show Figures 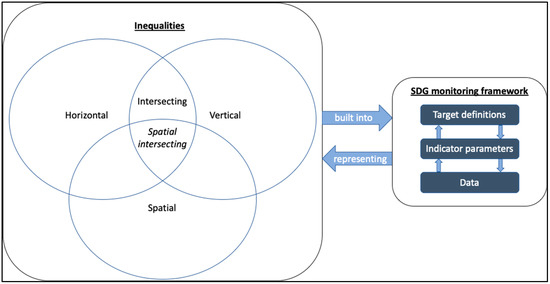