Shp2graph: Tools to Convert a Spatial Network into an Igraph Graph in R

An Analysis of the Evolution, Completeness and Spatial Patterns of OpenStreetMap Building Data in China

2.2.1. Analysis Based on OSM Building Count

The tenet of this method was to compare the OSM building counts across different years for analyzing the evolution (Q1), and also to compare those among different provincial- and prefecture-level divisions for analyzing the Q2. More precisely, the development of OSM building counts across different years (from 2012 to 2017) was calculated, in terms of provincial- and prefecture-level divisions. These years were considered because there were very few OSM building data (e.g., no more than 5,000) in each provincial- and prefecture-level division before 2012.
Factors that may influence the development (or the spatial distribution) of OSM building data in China were also analyzed (Q3). These included the gross domestic product (GDP), population, urban land area, and OSM road length. GDP and population were considered because previous studies [38,39] found that population and socio-economic factors may have an impact on the completeness of OSM data. Urban land area was considered because the building count is often positively correlated with the size of an urban area. OSM road length was also considered because the OSM project was initially developed for collecting road data all over the world, and thus we assumed that volunteers may begin to contribute other geographical data (e.g. buildings and land uses), while road data are relatively complete.
The analysis based on OSM building count included the following steps:

2.2.2. Analysis Based on OSM Building Density

The tenet of this method was to compare the OSM building density values based on a smaller analysis unit (1 × 1 km2 grid) across different years for analyzing the evolution (Q1), and also to compare among different grid cells for analyzing the completeness in urban areas (Q4). This method was somehow implemented by following the steps proposed by Zhou [37], however, the correlation between the density and completeness of OSM building data was first validated with several study cases in China. The specific steps are listed as follows:
Rather than applying the above relationship to estimate the OSM building completeness for all the grid cells, only those grid cells whose OSM building density was either smaller or larger than a certain threshold were analyzed. Otherwise, the estimation error may increase dramatically, as discussed by Zhou [37]. More precisely,
A clustering approach is proposed to analyze the spatial pattern of those grid cells (called high-density grid cells) whose density values larger than a certain threshold (Q5). The aim of this approach is to group neighboring high-density grid cells into a cluster (Figure 1). Neighboring high-density grid cells were found by searching in either the four-direction clustering or the eight-direction clustering from an original high-density grid cell. After clustering, the number of clusters and the maximum area of a cluster was calculated for all the urban areas in each prefecture-level division. Finally, the above two measures (cluster count and maximum cluster area) were compared among different prefecture-level divisions, for which there was at least a single cluster.

Mainland China (excluding Hong Kong, Macao, Taiwan and the islands in the South China Sea) was used for analysis. The datasets involved in this study were as follows:

(1)
OSM datasets: Buildings and roads in the OSM datasets of China for 6 years (2012–2017) were obtained from http://download.geofabrik.de/index.html. Each OSM dataset was obtained for the last month (December) of each year.
(2)
Administrative datasets: Provincial- and prefecture-level administrative datasets were downloaded from http://www.gadm.org. A total of 34 provincial-level divisions and 334 prefecture-level divisions in China were used in the analysis.
(3)
Land-use/cover datasets: Globe land-cover/use datasets at 30 m resolution were downloaded (http://globallandcover.com) and “artificial surface” was viewed as the urban areas.
(4)
Socio-economic data: Three types of socio-economic data (population, GDP, and urban land area in terms of provincial- and prefecture-level divisions) across different years were acquired from the National Bureau of Statistics in China (http://www.stats.gov.cn).

4.1. Analyses Based on OSM Building Count

Table 1 lists the correlations among OSM building count and four potential factors (GDP, population, urban land area, and OSM road length) for provincial- and prefecture-level divisions in China.
Table 1 shows that in most cases, GDP and OSM road length have moderate correlations with the number of OSM building data for either provincial- or prefecture-level divisions in China. Indeed, most OSM building data were located in the relatively developed regions (e.g., eastern coast) of China, as shown in Figure 3 and Figure 4. This is probably because there are not only much more buildings in total, but also more high-income and internet users in relatively developed regions of China. Interestingly, OSM road length was also positively correlated with the number of OSM building data. One possible reason is that the longer the OSM road length in a region, the more complete the OSM road data in such a region, where volunteers begin to contribute other geographical data (e.g., building data).

4.2. Analyses Based on OSM Building Density

This study has analyzed the evolution, completeness and spatial patterns of the OSM building data in China. This may benefit users who obtain free building datasets in China because authorized building datasets in this country are not freely available. Two existing indicators (OSM building count and OSM building density) were employed. The numbers of OSM building data (or OSM building count) in different provincial- and prefecture-level divisions from 2012 to 2017 were analyzed on the spatial scale and in the temporal dimension. Four potential factors (GDP, population, urban land area, and OSM road length) that may affect the development of OSM building data were also investigated. The percentages of different density ranges (0%, 0–25%, >25%) in urban areas were calculated for several typical prefecture-level divisions, and a clustering approach was proposed to analyze the spatial distribution of grid cells whose density values were relatively higher (called high-density grid cells).
The results of this study have demonstrated that:

(1)
The OSM building data in China increased by almost 20 times from 2012 to 2017, especially for those regions located on the eastern coast of China. In most cases, the GDP and OSM road length factors had a moderate correlation with OSM building count.
(2)
Most grid cells in urban areas still have no buildings or their building density is equal to 0%, which indicates that the OSM building dataset in China is far from being complete. From analyzing the high-density grid cells, two typical spatial distribution modes (dispersion and aggregation) were found in multiple prefecture-level divisions.

The above results may benefit users (especially researchers and educators) who choose appropriate OSM building dataset(s) in China as study area(s). For instance, the provinces and prefecture-level divisions located on the eastern coast (or relatively developed regions) of China may be preferred because there are more OSM building data in these regions. Users may also refer to the spatial distribution modes of different metropolises in Figure 7 and Figure 8 to choose OSM building dataset(s) in hot spot(s) (e.g., shopping, tourist and/or transportation centers), or those with relatively larger cluster areas. More importantly, the proposed approach may be used for continually extracting high-density grid cells, as OSM building data is still being updated. Moreover, volunteers around the world may be motivated to contribute more OSM building data in various regions (e.g., those provinces or prefecture-level divisions that have very few OSM building data, or those grid cells that do not have any OSM building data) of China.
There are some limitations of this study, however. First, specific completeness values for those provincial- and prefecture-level divisions in China were not given out, because the total building numbers for various divisions were unknown. Besides, there was not any evidence that the OSM building count can be used for quantitative completeness estimation of OSM building data, and this is also the case for the OSM building area indicator. Second, rural areas were excluded using the OSM building density for analysis, because this indicator is not suitable for analyzing in rural areas [37]. Therefore, in future work, there is still a need to develop quality indicators for quantitative completeness estimation of OSM building data, especially in rural areas. One possible alternative is to consider not only geometric indicators (e.g., OSM building count, area and/or density), but also socio-economic indicators (e.g., population and/or income). It would also be interesting to investigate other quality measures (e.g., positional accuracy and semantic accuracy) or geographical features (e.g., railways, land uses, and points of interest) in China’s OSM dataset.

Q.Z. contributed to conceive and design this study; Y.T. performed the experiment. Y.T. and X.F. analyzed the results. Y.T. wrote the manuscript and Q.Z. revised the manuscript.

This project was supported by the National Natural Science Foundation of China (Nos. 41771428 and 71874165), China Institute of Geo-Environment Monitoring (No. 0001212016CC60013), Fundamental Research Funds for the Central Universities, China University of Geosciences (Wuhan), and Open Research Fund of Teaching Laboratory, China University of Geosciences (Wuhan).

The authors want to thank the OpenStreetMap © contributors for making available as open their databases. We also express special thanks to all the editors and anonymous reviewers for their careful work and thoughtful suggestions that have helped improve this paper substantially. 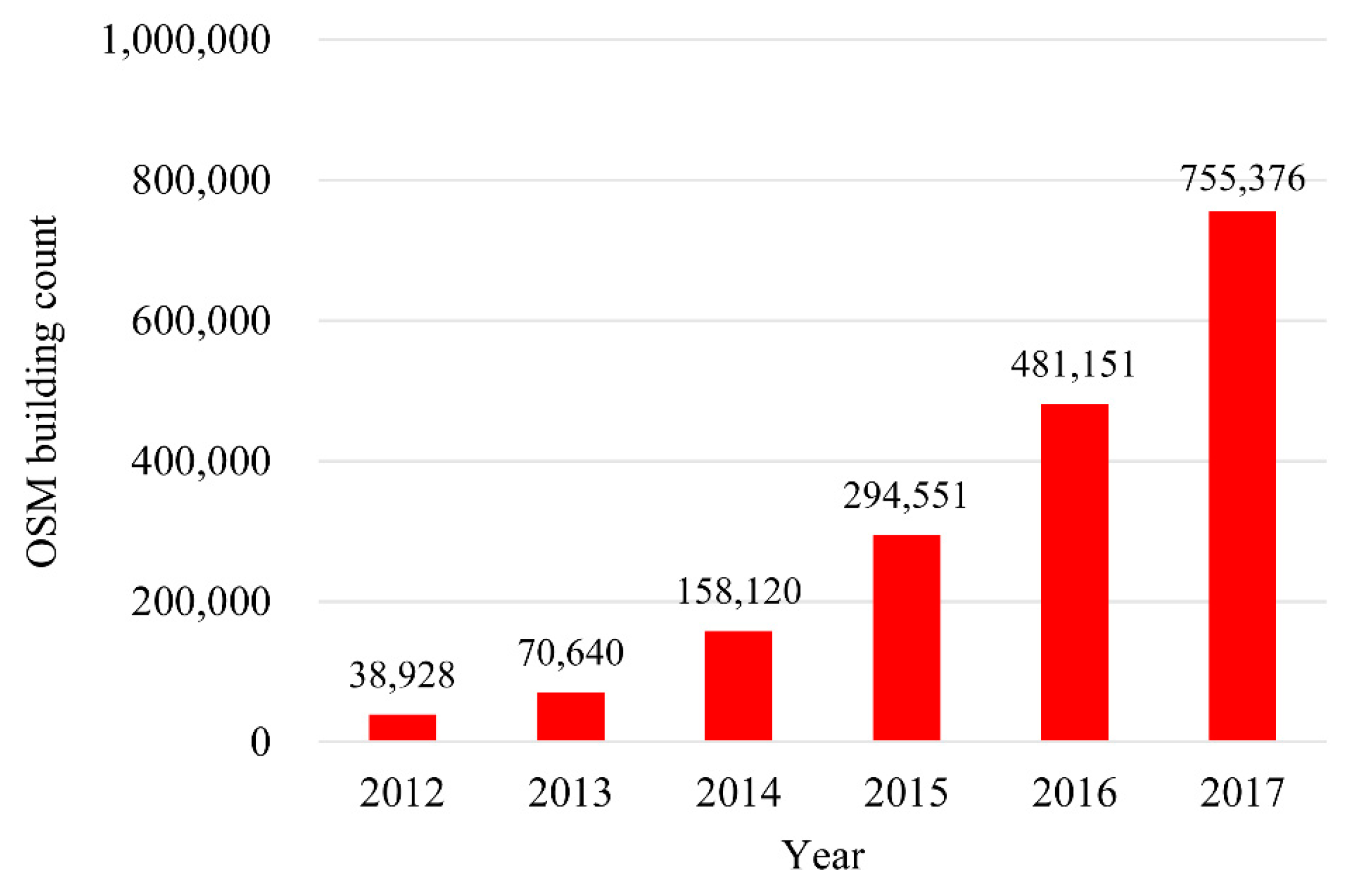 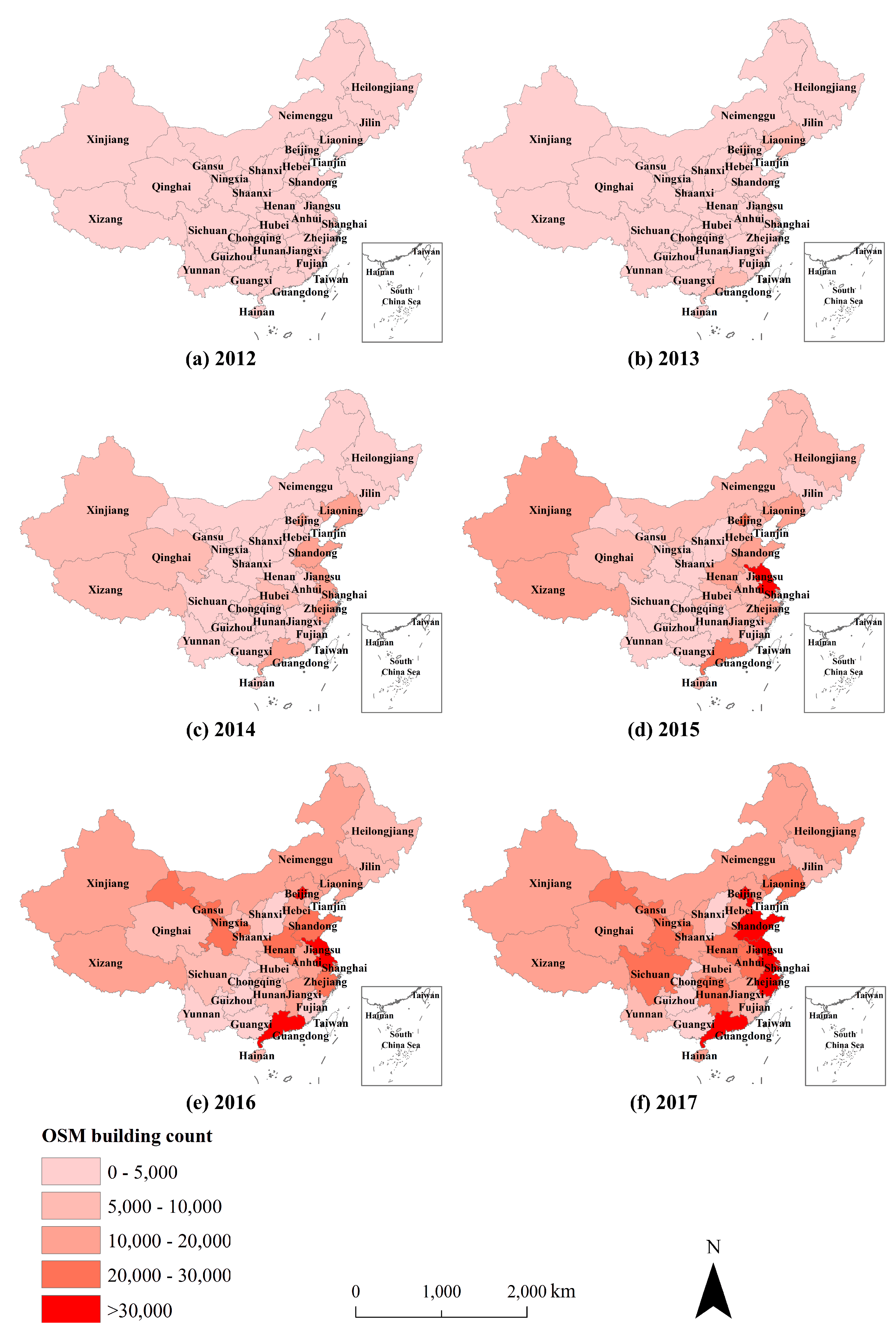 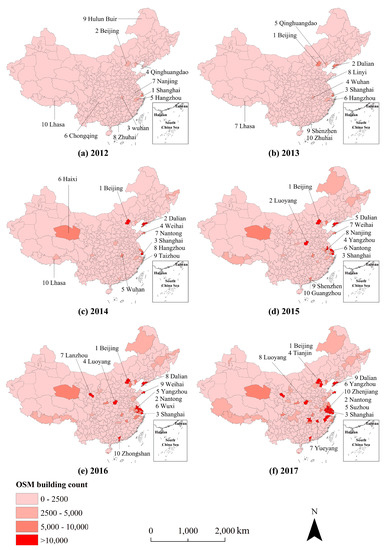 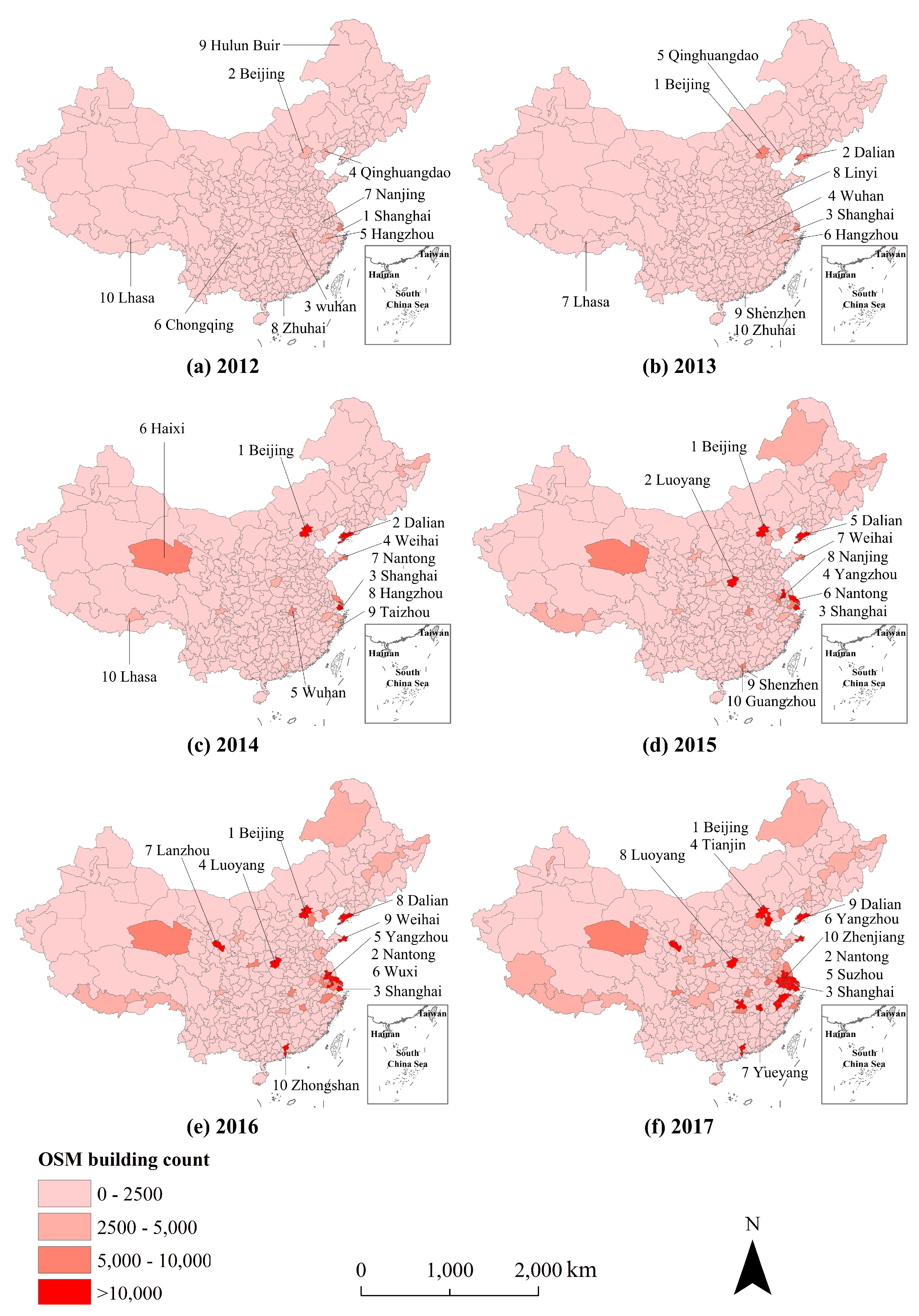 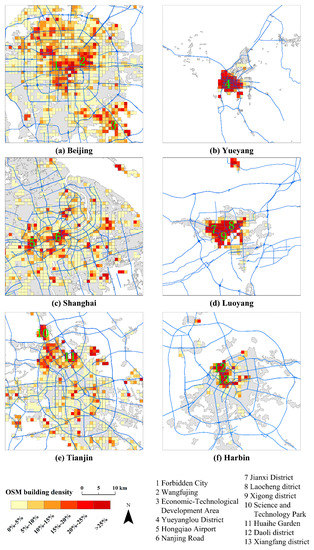 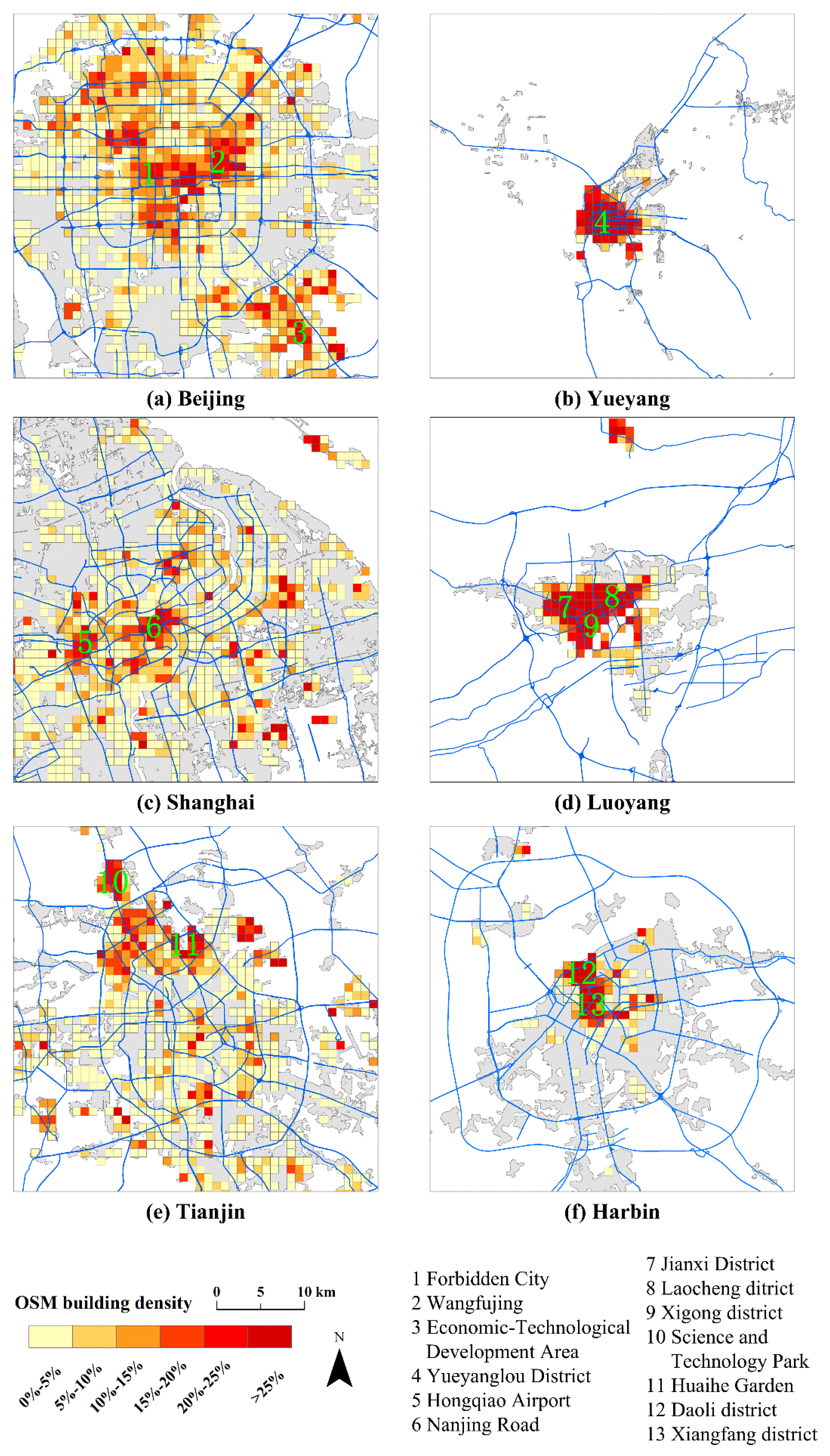