This paper proposes an open-boundary locally weighted dynamic time warping (OLWDTW) method using MODIS Normalized Difference Vegetation Index (NDVI) time-series data for cropland recognition. The method solves the problem of flexible planting times for crops in Southeast Asia, which has sufficient thermal and water conditions. For NDVI time series starting at the beginning of the year and terminating at the end of the year, the method can separate the non-growing season cycle and growing season cycle for crops. The non-growing season cycle may provide some useful information for crop recognition, such as soil conditions. However, the shape of the growing season’s NDVI time series for crops is the key to separating cropland from other land cover types because the shape contains all of the crop growth information. The principle of the OLWDTW method is to enhance the effects of the growing season cycle on the NDVI time series by adding a local weight to the growing season when comparing the similarity of time series based on the open-boundary dynamic time warping (DTW) method. Experiments with two satellite datasets located near the Khorat Plateau in the Lower Mekong Basin validate that OLWDTW effectively improves the precision of cropland recognition compared to a non-weighted open-boundary DTW method in terms of overall accuracy. The method’s classification accuracy on cropland exceeds the non-weighted open-boundary DTW by 5–7%. In future studies, an open-boundary self-adaption locally weighted DTW and a more effective combination rule for different crop types should be explored for the method’s best performance and highest extraction accuracy for cropland.
Keywords: dynamic time warping (DTW); remote sensing; Lower Mekong Basin; MODIS; time series; crops; cropland; classification dynamic time warping (DTW); remote sensing; Lower Mekong Basin; MODIS; time series; crops; cropland; classification

Global agricultural production will likely need to increase in the future due to population growth, changing diets, and the rising importance of bioenergy [1]. Cropland mapping is an important part of land-use/land cover (LULC) mapping. Mapping cropland distribution [2,3] and monitoring crop growth status [4] as well as forecasting crop yield [5,6] using remote sensing data have been popular remote sensing applications. Timely and effective observation of the distribution of cropland in Southeast Asia is important for the food security of people living in the region. There have been recent studies focused on land cover mapping or crop mapping in Southeast Asia [3,7]. To obtain seasonal information on crops and separate rice paddy fields from dryland fields, time-series remote sensing data are usually used to extract cropland distribution information [8,9,10].
Time-series datasets for the Normalized Difference Vegetation Index (NDVI) or Enhanced Vegetation Index (EVI) have been used widely for cropland classification [11,12,13]. The datasets are provided by high revisit cycle frequency satellites such as NOAA/AVHRR, SPOT/VEGETATION, and Terra or Aqua/MODIS. Methods for time-series remote sensing data classification and their drawbacks and advantages for cropland extraction include:
Various approaches to measuring similarity exist in the literature and many of them are used for remote sensing classification. Geerken et al. applied the Fourier filtered cycle similarity method to identify rangeland vegetation types [24]. DTW (Dynamic Time Warping) distance is a shape-based time series similarity measure method. The algorithm compares two time series and finds their optimal alignment, providing a dissimilarity measure as a result [25]. DTW is very good in dealing with temporal drift [26]. Petitjean et al. applied the DTW distance to K-means clustering for land-cover classification and developed an average method to fit a multi-spectral remote sensing time series to K-means clustering [27,28,29]. Our previous study applied the DTW distance to identify rice paddy fields [30]. Maus et al. improved the DTW method for land-use and land-cover mapping by adding a time-weighting to constrain warping distance between two time series and extended the single split year into multiple years. All of these efforts have tried to mine remote sensing time-series information and improve the classification accuracies of specific problems. However, all of these approaches have not considered counterpoises to some applications in remote sensing, such as some sections of the time series being more important than other sections for time series similarity measures. For example, when identifying crops, the similarities between the growing season cycles are more important than the similarities between non-growing season cycles.
In this paper, we propose an open-boundary locally weighted dynamic time warping (OLWDTW) method for cropland mapping, where rice cultivation and field crops are separated in the extraction process. OLWDTW is based on open-boundary dynamic time warping. We selected open-boundary dynamic time warping because it is suited for the flexible planting season condition of crops of Southeast Asia [30]. Without time constraints when comparing time series similarities, open-boundary dynamic time warping is able to align any phase excursion between two NDVI time series. For example, the growth cycle of rice lasts for about four months, and the growing season of the reference NDVI time series might be from July to November while the test pixel for the rice plantation might show growth from February to June. These two NDVI time series of rice are excessively warped in the offsets of the growing season section. Still, the open-boundary dynamic time warping method is able to align the section of the growing season curve as shown in Figure 1. However, excessive alignment of curves also causes problems, such as when the warping is too extreme, or the warping cost distance of the whole NDVI time series of the final distance surpasses the distance of the growing season section such that identification of crops is difficult [31]. In our study, by adding a weight on the section of the seasonal growing curve, we can weaken the effect of the less important comparison of similarities between non-growing season cycle sections on the NDVI time series as well as reduce the effects of excessive alignment. Similarity measures between the two curves mainly focus on the growing season section, thus improving the identification accuracy.
The rest of the paper is organized as follows. In Section 2, we introduced the materials we used for the experiments. The proposed OLWDTW is described in detail in Section 2. Section 3 shows the experiment results, accuracy validations, and comparisons with an ordinary DTW method on two satellite datasets. The advantages and some future work are also discussed in Section 3. The conclusion is provided in Section 4.

The study mainly used MODIS time-series data for classification. The MODIS data product was retrieved from the online Data Pool, courtesy of the NASA Land Processes Distributed Active Archive Center (LP DAAC), United States Geological Survey (USGS)/Earth Resources Observation and Science (EROS) Center; specifically, the MOD09Q1 data for 2015 were used. MOD09Q1 provides MODIS bands 1–2 surface reflectance at 250-m resolution. Landsat 8 OLI data were obtained for geometric correction. Landsat 8 OLI data were obtained from the USGS website (https://earthexplorer.usgs.gov/). We obtained high-quality imagery (cloud cover less than 10%) in the Path 128 Row 49 scene for 18 March 2015.
We obtained the two bands of the MOD09Q1 data using the MRT tool for NDVI calculated with Equation (1). Tiles h27v07 covered the two test sites of this study [33]. where is the reflectance value of the NIR band of the MOD09Q1 data and Landsat 8 data and is the reflectance value of the red band of the MOD09Q1 data and Landsat 8 data.
To reduce the noise for better use of the NDVI time-series data, we used the adaptive S-G (Savitzky–Golay) filter in the TIMESAT software (version 3.1) [34] to reduce noise in the MODIS NDVI time-series data. The parameters in TIMESAT were set as follows: a window size of 4 for the filter, adaption strength of 2, and the number of envelope iterations was set to 3.

3.2. Classification with the OLWDTW Method

The similarity measure of each pixel’s annual NDVI time series with the reference NDVI time series was obtained using the original DTW distance and the OLWDTW distance. The threshold we obtained from Section 3.1 and Section 3.2.1 was used to extract the two crop types in the two test sites. For the overlapping region, the lower DTW distance was decided as the final class type. Figure 9 shows the distribution of dryland and rice paddy in test 1 and test 2 classified by the ODTW and OLWDTW methods before combination and dealing with the overlapping region. For the OLWDTW distance, we decided the final class of the overlapping layer by the layer with the highest kappa coefficient. The final cropland distribution is shown in Figure 9.

This article applied an open-boundary locally weighted dynamic time warping distance method developed for the recognition of cropland in Southeast Asia. The OLWDTW distance algorithm was developed based on the DTW distance. An enhancement factor was added to the original DTW among the growth season section of the annual NDVI time series that allowed for strengthening the affection of the growth season section when comparing the annual NDVI time series’ similarities. In the study area within the Lower Mekong Delta in Southeast Asia, the method was proven to achieve higher overall accuracy for mapping cropland distribution. Although the overall accuracy of cropland classification was higher than the original DTW distance, the classification accuracy of dryland crops was worse than the original DTW distance. This was caused by the small plot size of dryland crops and an inappropriate method for dealing with the overlapping region.
Two test areas were selected to verify the approach. The overall accuracy of cropland extraction improved by about 5% and 7% in the two test sites compared to ODTW. The results highlight the potential of OLWDTW to improve the classification accuracy of rice paddies, but for dryland crops further work is needed to obtain a higher classification accuracy. We expect that the OLWDTW algorithm will be used for large-scale cropland classification of remote sensing time-series data after a better technique is developed to deal with overlapping regions of croplands. However, classifying one kind of crop, especially rice paddies, over large areas is feasible in the current version.

Gaohuan Liu conceived the study. Xudong Guan performed the data analysis and wrote the paper. Chong Huang and Qingsheng Liu supervised and provided logistical support to the research. Xuelian Meng provided feedback on the study design and modified the manuscript. Chunsheng Wu and Xiare Pati helped in the data processing. Zhuoran Chen and Qiang Wang improved the program for the OLWDTW method. All authors reviewed and approved the manuscript. 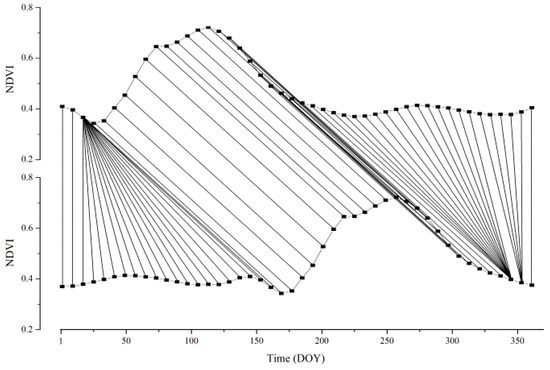 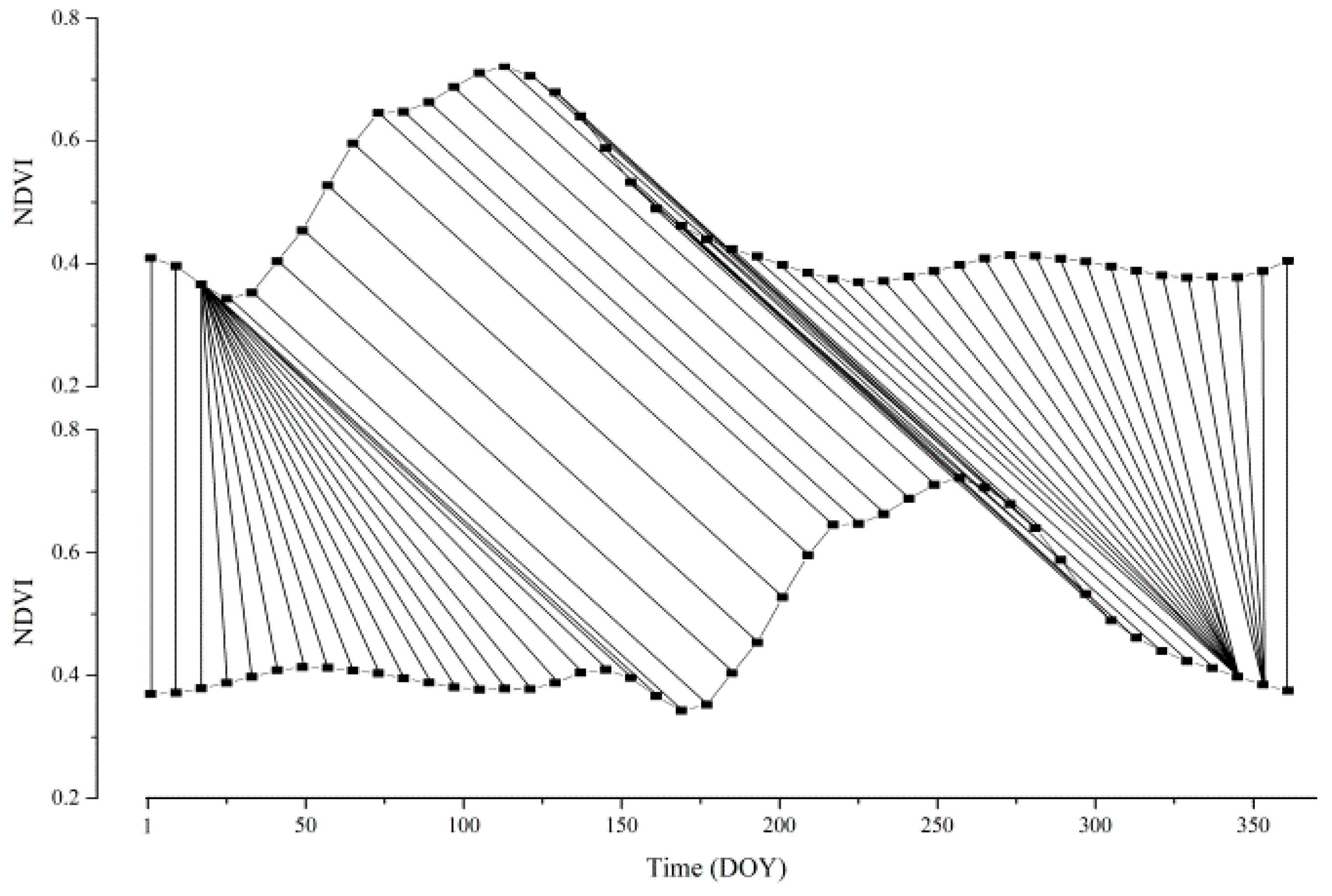 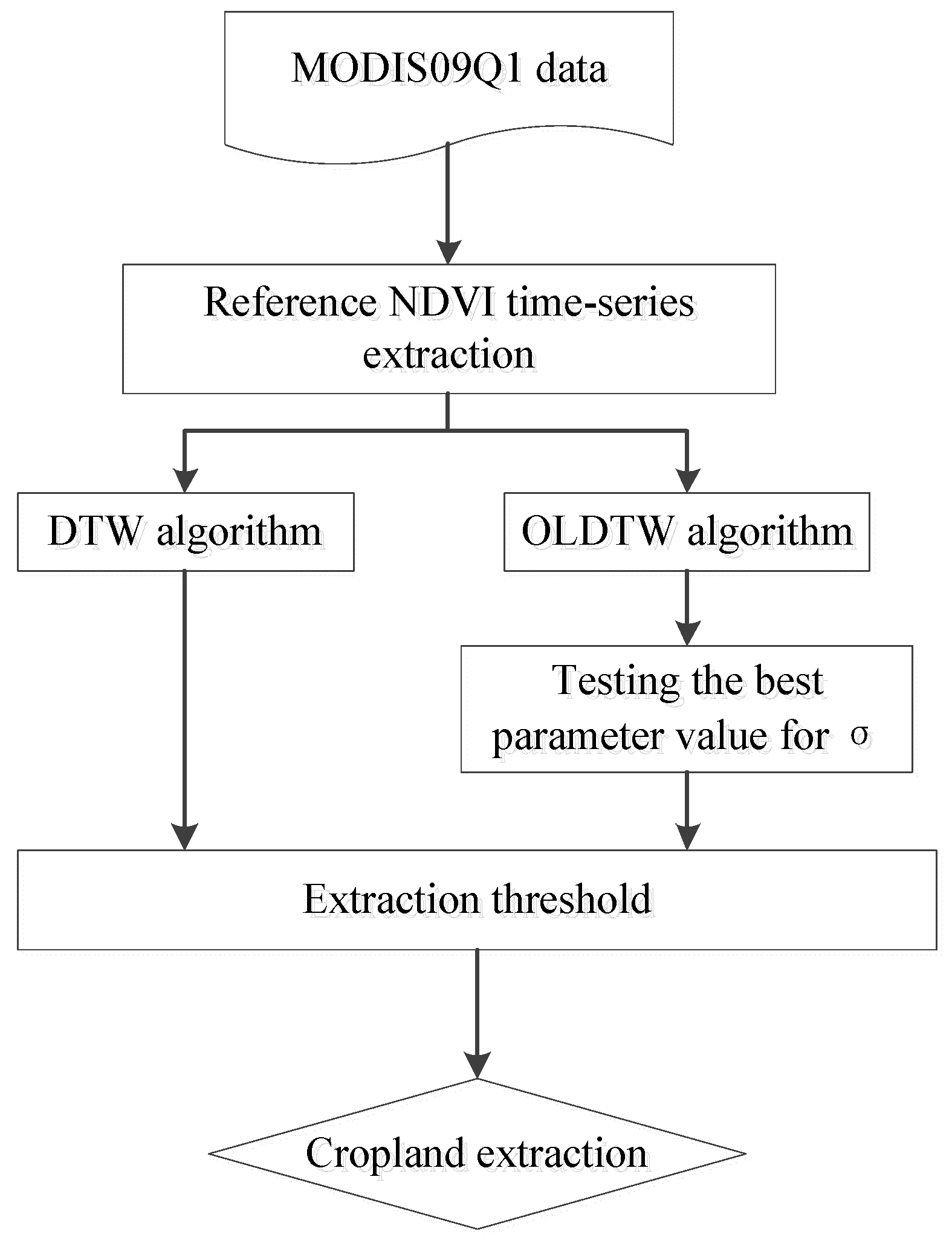 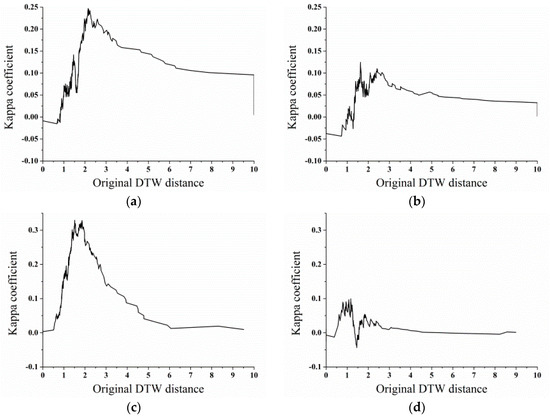 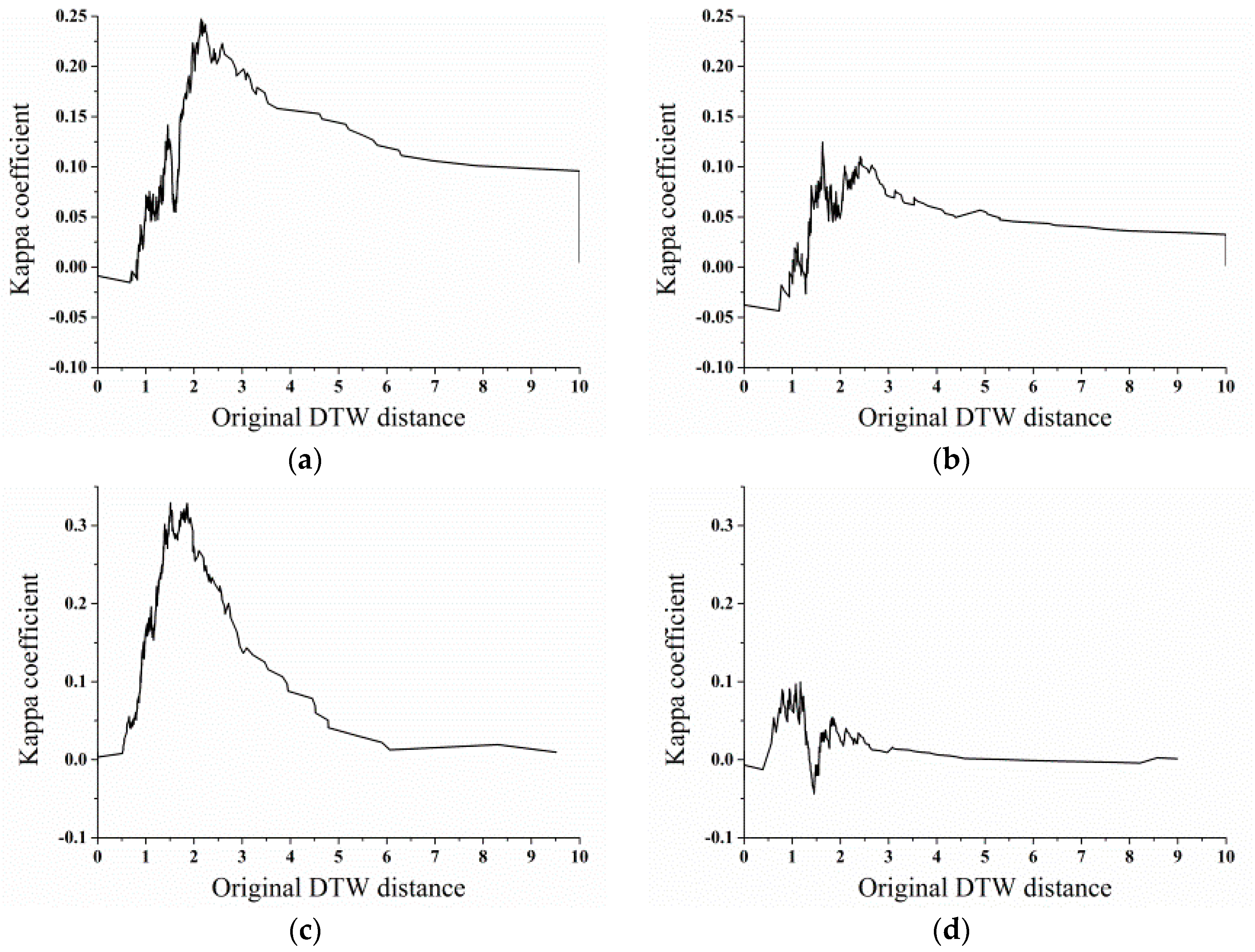 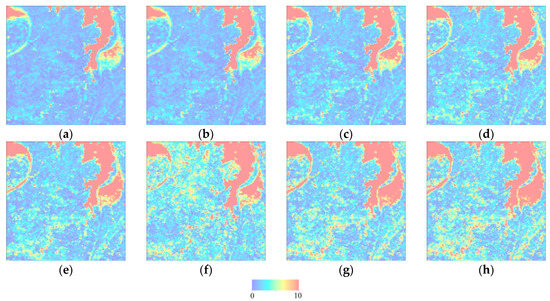 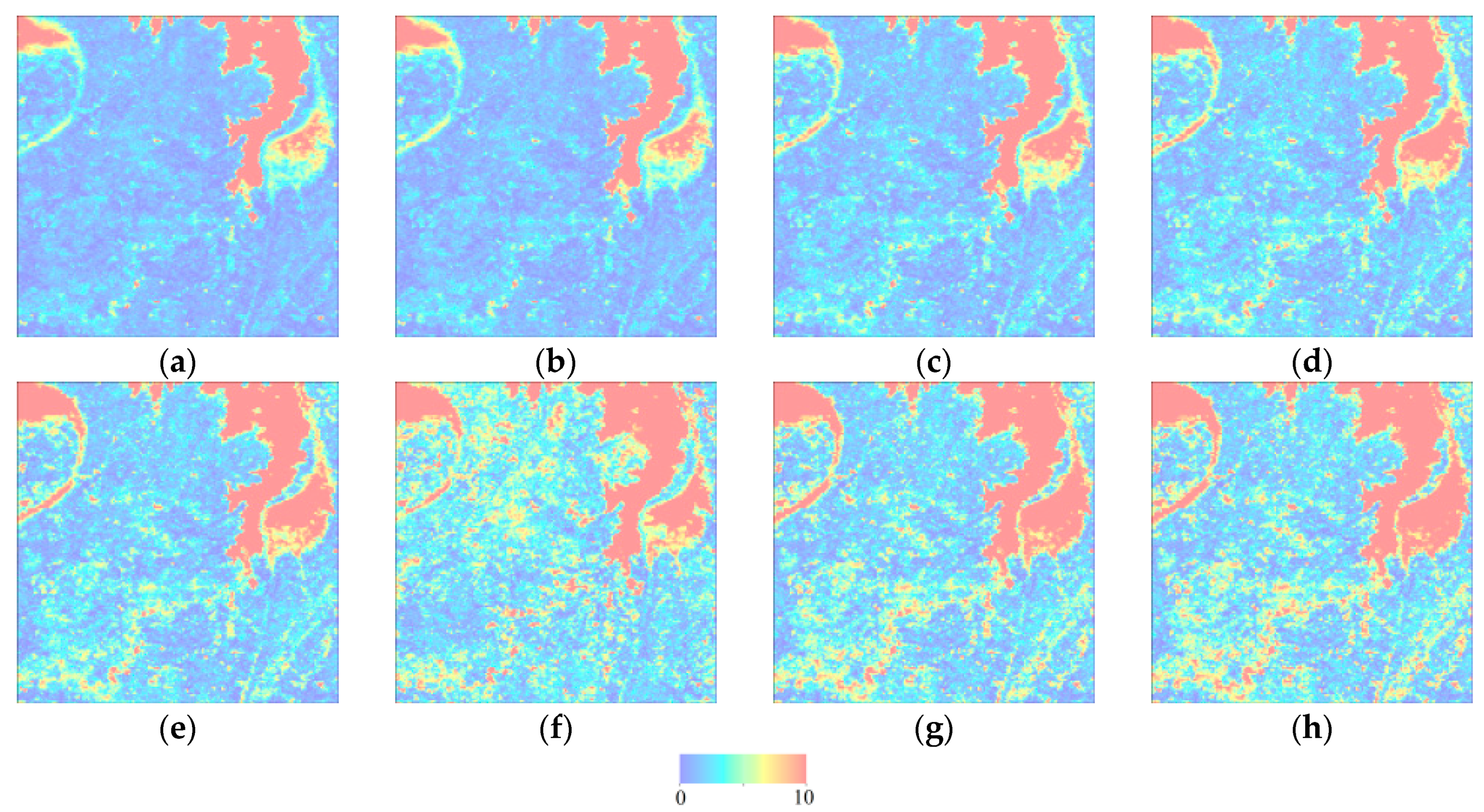 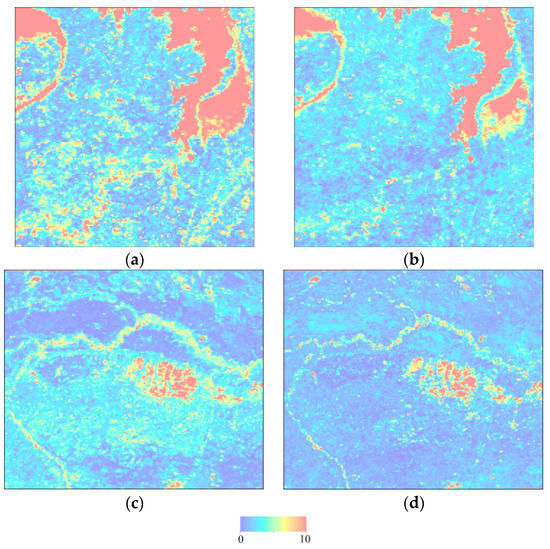