Visualization of Features in 3D Terrain

Correction of digital elevation models (DEMs) for flat areas is a critical process for hydrological analyses and modeling, such as the determination of flow directions and accumulations, and the delineation of drainage networks and sub-basins. In this study, a new algorithm is proposed for flat correction/removal. It uses the puddle delineation (PD) program to identify depressions (including their centers and overflow/spilling thresholds), compute topographic characteristics, and further fill the depressions. Three different levels of elevation increments are used for flat correction. The first and second level of increments create flows toward the thresholds and centers of the filled depressions or flats, while the third level of small random increments is introduced to cope with multiple threshold conditions. A set of artificial surfaces and two real-world landscapes were selected to test the new algorithm. The results showed that the proposed method was not limited by the shapes, the number of thresholds, and the surrounding topographic conditions of flat areas. Compared with the traditional methods, the new algorithm simplified the flat correction procedure and reduced the final elevation increments by 5.71–33.33%. This can be used to effectively remove/correct topographic flats and create flat-free DEMs. View Full-Text
Keywords: DEM; surface delineation; flat area; topography; hydrology; terrain analysis DEM; surface delineation; flat area; topography; hydrology; terrain analysis
►▼ Show Figures 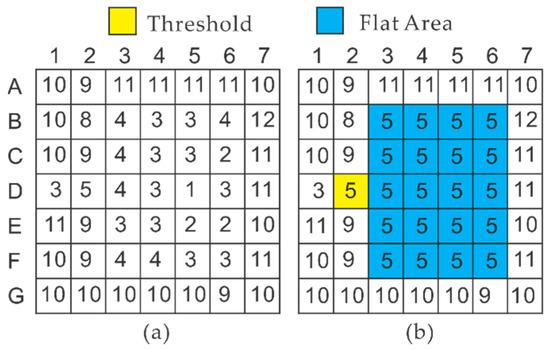