DNA replication in plastids and mitochondria is generally regulated by nucleus-encoded proteins. In plants and red algae, a nucleus-encoded enzyme called POP (plant and protist organellar DNA polymerase) is involved in DNA replication in both organelles by virtue of its dual localization. POPs are family A DNA polymerases, which include bacterial DNA polymerase I (PolI). POP homologs have been found in a wide range of eukaryotes, including plants, algae, and non-photosynthetic protists. However, the phylogeny and subcellular localizations of POPs remain unclear in many algae, especially in secondary and tertiary plastid-bearing groups. In this study, we report that chlorarachniophytes possess two evolutionarily distinct POPs, and fluorescent protein-tagging experiments demonstrate that they are targeted to the secondary plastids and mitochondria, respectively. The timing of DNA replication is different between the two organelles in the chlorarachniophyte Bigelowiella natans, and this seems to be correlated to the transcription of respective POP genes. Dinoflagellates also carry two distinct POP genes, possibly for their plastids and mitochondria, whereas haptophytes and ochrophytes have only one. Therefore, unlike plants, some algal groups are likely to have evolved multiple DNA polymerases for various organelles. This study provides a new insight into the evolution of organellar DNA replication in complex plastid-bearing organisms. View Full-Text
Keywords: algae; chlorarachniophytes; DNA replication; endosymbiosis; mitochondria; plastids algae; chlorarachniophytes; DNA replication; endosymbiosis; mitochondria; plastids
►▼ Show Figures 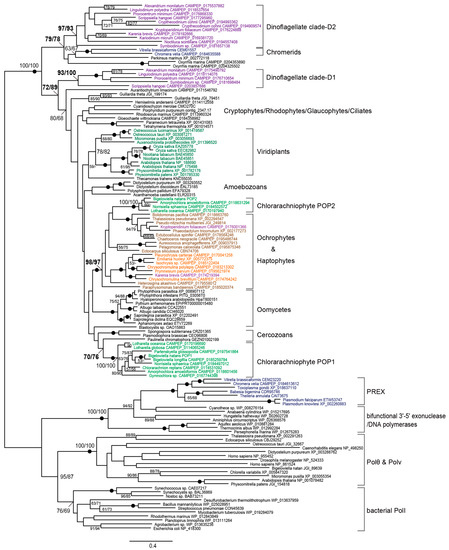