Contribution of Non-Saccharomyces Yeasts to Wine Freshness. A Review
Previous Article in Journal

Paraoxonase 3: Structure and Its Role in Pathophysiology of Coronary Artery Disease
Previous Article in Special Issue

Disease Resistant Bouquet Vine Varieties: Assessment of the Phenolic, Aromatic, and Sensory Potential of Their Wines

The Actual and Potential Aroma of Winemaking Grapes

This review intends to rationalize the knowledge related to the aroma of grapes and to the aroma of wine with specific origin in molecules formed in grapes. The actual flavor of grapes is formed by the few free aroma molecules already found in the pulp and in the skin, plus by those aroma molecules quickly formed by enzymatic/catalytic reactions. The review covers key aroma components of aromatic grapes, raisins and raisinized grapes, and the aroma components responsible from green and vegetal notes. This knowledge is used to explain the flavor properties of neutral grapes. The aroma potential of grape is the consequence of five different systems/pools of specific aroma precursors that during fermentation and/or aging, release wine varietal aroma. In total, 27 relevant wine aroma compounds can be considered that proceed from grape specific precursors. Some of them are immediately formed during fermentation, while some others require long aging time to accumulate. Precursors are glycosides, glutathionyl and cysteinyl conjugates, and other non-volatile molecules. View Full-Text
Keywords: wine aging; glycosides; glutathione; mercaptans; terpenols; norisoprenoids; volatile phenols; vanillin wine aging; glycosides; glutathione; mercaptans; terpenols; norisoprenoids; volatile phenols; vanillin
►▼ Show Figures 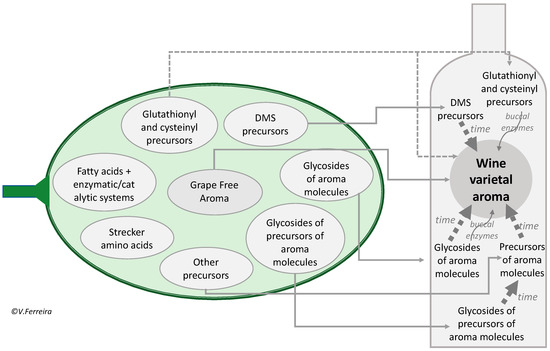