Manipulation is usually required for biomass calculation and food estimation for optimal fish growth in production facilities. However, the advances in computer-based systems have opened a new range of applied possibilities. In this study we used image analysis and a neural network algorithm that allowed us to successfully provide highly accurate biomass data. This developed system allowed us to compare the effects of reduced levels of human-animal interaction on the culture of adult Senegalese sole (Solea senegalensis) in terms of body weight gain. For this purpose, 30 adult fish were split into two homogeneous groups formed by three replicates (n = 5) each: a control group (CTRL), which was standard manipulated and an experimental group (EXP), which was maintained under a lower human-animal interaction culture using our system for biomass calculation. Visible implant elastomer was, for the first time, applied as tagging technology for tracking soles during the experiment (four months). The experimental group achieved a statistically significant weight gain (p < 0.0100) while CTRL animals did not report a statistical before-after weight increase. Individual body weight increment was lower (p < 0.0100) in standard-handled animals. In conclusion, our experimental approach provides evidence that our developed system for biomass calculation, which implies lower human-animal interaction, improves biomass gain in Senegalese sole individuals in a short period of time. View Full-Text
Keywords: Senegalese sole; production science; biomass; artificial neural network Senegalese sole; production science; biomass; artificial neural network
►▼ Show Figures 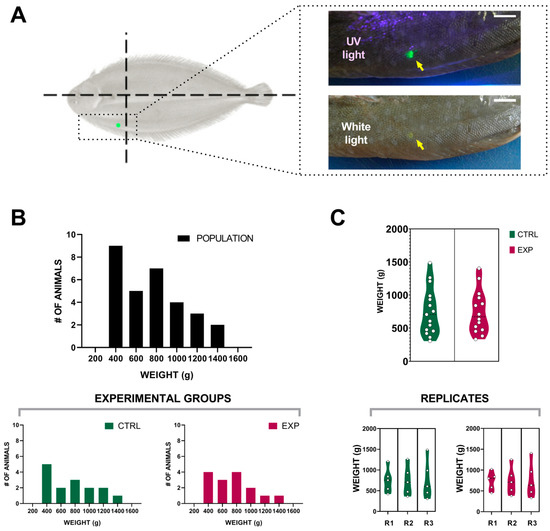