Combined Use of Deep Eutectic Solvents, Macroporous Resins, and Preparative Liquid Chromatography for the Isolation and Purification of Flavonoids and 20-Hydroxyecdysone from Chenopodium quinoa Willd
Next Article in Special Issue

New Insights into the Control of Cell Fate Choices and Differentiation by Retinoic Acid in Cranial, Axial and Caudal Structures
Previous Article in Journal

Retinoic Acid and Germ Cell Development in the Ovary and Testis

Retinoic acid (RA), a derivative of vitamin A, is critical for the production of oocytes and sperm in mammals. These gametes derive from primordial germ cells, which colonize the nascent gonad, and later undertake sexual differentiation to produce oocytes or sperm. During fetal development, germ cells in the ovary initiate meiosis in response to RA, whereas those in the testis do not yet initiate meiosis, as they are insulated from RA, and undergo cell cycle arrest. After birth, male germ cells resume proliferation and undergo a transition to spermatogonia, which are destined to develop into haploid spermatozoa via spermatogenesis. Recent findings indicate that RA levels change periodically in adult testes to direct not only meiotic initiation, but also other key developmental transitions to ensure that spermatogenesis is precisely organized for the prodigious output of sperm. This review focuses on how female and male germ cells develop in the ovary and testis, respectively, and the role of RA in this process. View Full-Text
Keywords: germ cells; retinoic acid; meiosis; ovary; spermatogenesis; testis germ cells; retinoic acid; meiosis; ovary; spermatogenesis; testis
►▼ Show Figures 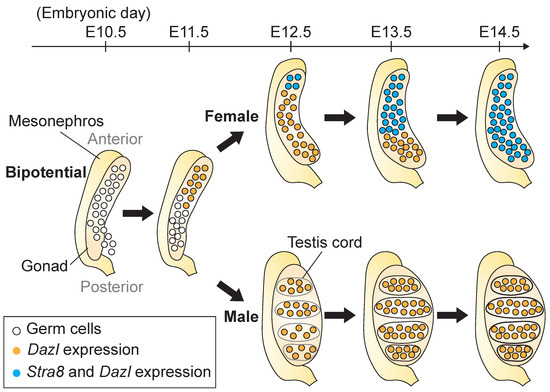