Introduction: Pancreatic cancer (PC) is a lethal malignancy. Various diagnostic, predictive, and prognostic biomarkers have been evaluated. This study was conducted to investigate the serum levels of neural precursor cell expressed developmentally downregulated protein 9 (NEDD9) in patients with PC and the relationship between tumor progression and known prognostic parameters. Materials and Methods: Serum samples were obtained on first admission before any treatment. Serum NEDD9 levels were determined using enzyme-linked immunosorbent assay (ELISA). Age- and sex-matched healthy controls were included in the analysis. Results: In a three year period, 32 patients with a pathologically-confirmed diagnosis of PC were enrolled in this study. The median age at diagnosis was 61 years, range 38 to 84 years; the majority of the patients in the group were men (n = 20, 62.5%). The tumor was located in the head of pancreas in 21 (65.6%) patients. Forty-one percent of 17 metastatic patients who received palliative CTx (chemotherapy) were CTx-responsive. The baseline serum NEDD9 levels were significantly higher in patients with PA than in the control group (p = 0.03). Median OS of the whole group were 27 ± 7.3 weeks. Alcohol intake, performance status, and LDH levels were found to be significant prognostic factors (p = 0.006, p < 0.001, and p < 0.001, respectively). However, serum NEDD9 levels had no significantly effect on progression free survival (PFS) and overall survival (OS) (p = 0.71 and p = 0.58, respectively). Conclusions: NEDD9 is identified as a secretory biomarker for PC but it has no prognostic role. View Full-Text
Keywords: NEDD9; pancreatic cancer; serum; diagnostic NEDD9; pancreatic cancer; serum; diagnostic
►▼ Show Figures 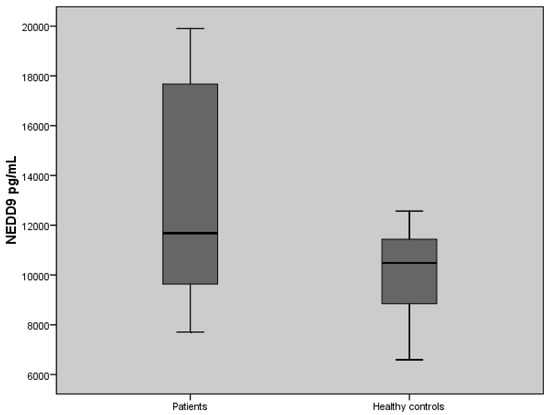