Insights into the Activation of a Crustacean G Protein-Coupled Receptor: Evaluation of the Red Pigment-Concentrating Hormone Receptor of the Water Flea Daphnia pulex (Dappu-RPCH R)
Previous Article in Journal

The discovery of new insecticides improves integrated pest management (IPM), but is usually a long high-risk process with a low probability of success. For over two decades, insect neuropeptides (NPs) and their G-protein coupled receptors (GPCRs) have been considered as biological targets for insect pest control, because they are involved in almost all physiological processes associated with insect life stages. A key roadblock to success has been the question of how large volume chemical libraries can be efficiently screened for active compounds. New genomic and proteomic tools have advanced and facilitated the development of new approaches to insecticide discovery. In this study, we report a novel GPCR-based screening technology that uses millions of short peptides randomly generated by bacteriophages, and a method using an insect Sf9 cell expression system. The fire ant is a good model system, since bioactive peptides have been identified for a specific GPCR. The novel small peptides could interfere with the target GPCR-ligand functions. Therefore, we refer to this new mechanism as “receptor interference” (RECEPTORi). The GPCR-based bioactive peptide screening method offers multiple advantages. Libraries of phage-displayed peptides (~109 peptides) are inexpensive. An insect cell-based screening system rapidly leads to target specific GPCR agonists or antagonists in weeks. Delivery of bioactive peptides to target pests can be flexible, such as topical, ingestion, and plant-incorporated protectants. A variety of GPCR targets are available, thus minimizing the development of potential insecticide resistance. This report provides the first proof-of-concept for the development of novel arthropod pest management strategies using neuropeptides, and GPCRs. View Full-Text
Keywords: GPCR; neuropeptide; bioactive peptides; phage-displayed peptides; biopanning; insect cell expression; insecticide discovery; RECEPTORi GPCR; neuropeptide; bioactive peptides; phage-displayed peptides; biopanning; insect cell expression; insecticide discovery; RECEPTORi
►▼ Show Figures 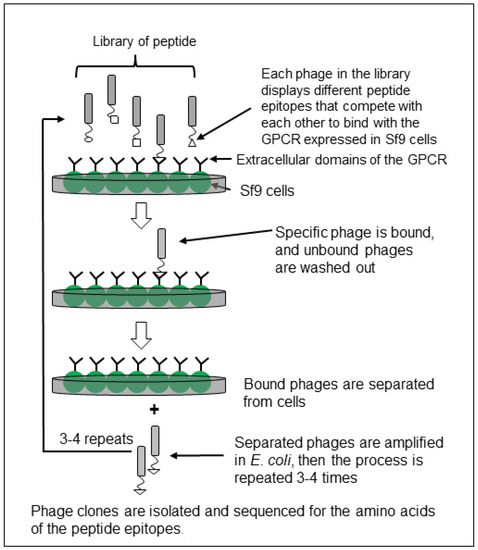