Direct-acting anticancer (DAA) peptides are cytolytic peptides that show promise as novel anticancer agents. DAA peptides bind to anionic molecules that are abundant on cancer cells relative to normal healthy cells, which results in preferential killing of cancer cells. Due to the mechanism by which DAA peptides kill cancer cells, it was thought that resistance would be difficult to achieve. Here, we describe the generation and characterization of two MDA-MB-231 breast cancer cell-line variants with reduced susceptibility to pleurocidin-family and mastoparan DAA peptides. Peptide resistance correlated with deficiencies in peptide binding to cell-surface structures, suggesting that resistance was due to altered composition of the cell membrane. Peptide-resistant MDA-MB-231 cells were phenotypically distinct yet remained susceptible to chemotherapy. Surprisingly, neither of the peptide-resistant breast cancer cell lines was able to establish tumors in immune-deficient mice. Histological analysis and RNA sequencing suggested that tumorigenicity was impacted by alternations in angiogenesis and extracellular matrix composition in the peptide-resistant MDA-MB-231 variants. Collectively, these data further support the therapeutic potential of DAA peptides as adjunctive treatments for cancer. View Full-Text
Keywords: anticancer peptide; breast cancer; cytolysis; peptide-resistance; pleurocidin anticancer peptide; breast cancer; cytolysis; peptide-resistance; pleurocidin
►▼ Show Figures 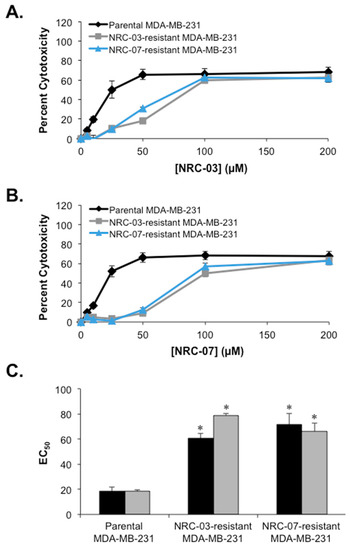