The emergence of multi-drug resistant bacteria such as methicillin-resistant Staphylococcus aureus (MRSA) causes a major threat to public health due to its limited therapeutic options. There is an urgent need for the development of new effective antimicrobial agents and alternative strategies that are effective against resistant bacteria. The parallel legalization of cannabis and its products has fueled research into its many therapeutic avenues in many countries around the world. This study aimed at the development of a reliable method for the extraction, purification, characterization, and quantification of cannabidiolic acid (CBDA) and its decarboxylated form cannabidiol (CBD) present in the fiber type Cannabis sativa L. The two compounds were extracted by ethanol, purified on a C18 sep-pack column, and the extracts were analyzed by high performance liquid chromatography coupled with ultraviolet (UV)–vis and ESI-MS (electrospray ionization mass spectrometry) detection. The antimicrobial effect of CBDA and CBD was also evaluated. CBD displayed a substantial inhibitory effect on Gram-positive bacteria with minimal inhibitory concentrations ranging from 1 to 2 µg/mL. Time kill analysis and minimal bactericidal concentration revealed potential bactericidal activity of CBDA and CBD. While cannabinoids showed a significant antimicrobial effect on the Gram-positive S. aureus and Staphylococcus epidermidis, no activity was noticed on Gram-negative Escherichia coli and Pseudomonas aeruginosa. CBDA presented a two-fold lower antimicrobial activity than its decarboxylated form, suggesting that the antimicrobial pharmacophore of the analyzed cannabinoids falls in the ability for permeabilizing the bacterial cell membrane and acting as a detergent-like agent. A synergy test performed on MRSA with CBD and a range of antibiotics did not indicate a synergetic effect, but noteworthy no antagonist influence either. CBD and CBDA manifested low hemolytic activity on human red blood cells. Likewise, the safety of CBD toward human keratinocyte cells presents no toxicity at a concentration of up to seven-fold higher than the antibacterial minimal inhibitory concentration. Similarly, both CBD and CBDA are well tolerated by mammals, including humans, and conserve a safe value limits for blood-contacting drug development. Overall, CBD exhibited a strong antimicrobial effect against Gram-positive strains and could serve as an alternative drug for tackling MRSA. View Full-Text
Keywords: cannabidiolic acid; cannabidiol; antibacterial; snergy; Cannabis sativa L.; Staphyloccoccus; HPLC; cannabinoids; cannabis cannabidiolic acid; cannabidiol; antibacterial; snergy; Cannabis sativa L.; Staphyloccoccus; HPLC; cannabinoids; cannabis
►▼ Show Figures 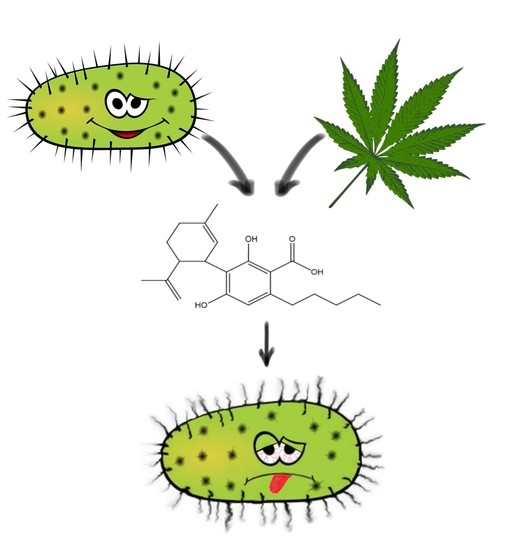