In studies on the degradation of glycogen by rhGAA, a glycosylated protein core material was found which consists of about 5–6% of the total starting glycogen. There was an additional 25% of the glycogen unaccounted for based on glucose released. After incubation of glycogen with rhGAA until no more glucose was released, no other carbohydrate was detected on HPAEC-PAD. Several oligosaccharides are then detectable if the medium is first boiled in 0.1 N HCl or incubated with trypsin. It is present in serum either in an HCl extract or in a trypsin digest. The characteristics of the in vivo serum material are identical to the material in the in vitro incubation medium. One oligosaccharide cannot be further degraded by rhGAA, from the incubation medium as well as from serum co-elute on HPAEC-PAD. Several masked oligosaccharides in serum contain m-inositol, e-inositol, and sorbitol as the major carbohydrates. The presence of this glycosylated protein in serum is a fraction of glycogen that is degraded outside the lysosome and the cell. The glycosylated protein in the serum is not present in the serum of Pompe mice not on ERT, but it is present in the serum of Pompe disease patients who are on ERT, so it is a biomarker of GAA degradation of lysosomal glycogen. View Full-Text
Keywords: rhGAA; Pompe disease; glycogen; lysosomal α-glucosidase; GAA biomarker rhGAA; Pompe disease; glycogen; lysosomal α-glucosidase; GAA biomarker
►▼ Show Figures 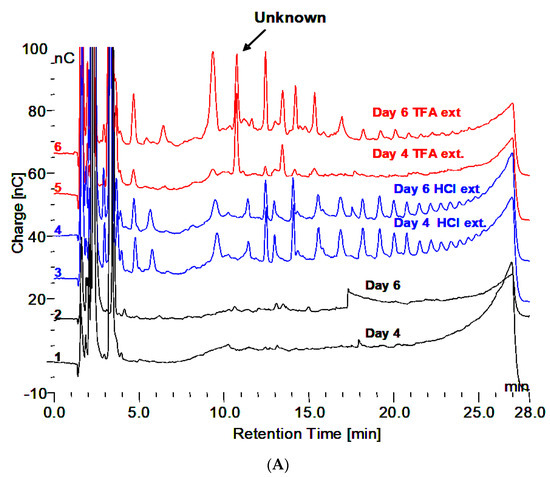 Murray, A.K. The Release of a Soluble Glycosylated Protein from Glycogen by Recombinant Lysosomal α-Glucosidase (rhGAA) In Vitro and Its Presence in Serum In Vivo. Biomolecules 2020, 10, 1613.


Murray AK. The Release of a Soluble Glycosylated Protein from Glycogen by Recombinant Lysosomal α-Glucosidase (rhGAA) In Vitro and Its Presence in Serum In Vivo. Biomolecules. 2020; 10(12):1613.


Murray, Allen K. 2020. "The Release of a Soluble Glycosylated Protein from Glycogen by Recombinant Lysosomal α-Glucosidase (rhGAA) In Vitro and Its Presence in Serum In Vivo" Biomolecules 10, no. 12: 1613.