The Interaction of Bovine β-Lactoglobulin with Caffeic Acid: From Binding Mechanisms to Functional Complexes

Anti-Survival and Pro-Apoptotic Effects of 6-Shogaol on SW872 Human Liposarcoma Cells via Control of the Intrinsic Caspase Pathway, STAT-3, AMPK, and ER Stress

Notably, 6-Shogaol, a bioactive natural substance, has anticancer effects on many types of tumors. Up to date, the anticancer effect and mode of action of 6-Shogaol on liposarcoma are not known. In this study, we investigated whether 6-Shogaol inhibits the growth of SW872 and 93T449 cells, two different human liposarcoma cell lines. Of note, 6-Shogaol inhibited the growth of SW872 and 93T449 cells without affecting that of normal 3T3-L1 preadipocytes. Specifically, 6-Shogaol further induced the apoptosis of SW872 cells, as evidenced by nuclear DNA fragmentation, increased sub G1 population, activation of the intrinsic caspase pathway, and PARP cleavage. However, pretreatment with either z-VAD-fmk, a pan-caspase inhibitor, or N-acetylcysteine, an antioxidant, attenuated the 6-Shogaol’s growth-suppressive and apoptosis-inducing effects on SW872 cells. Moreover, 6-Shogaol activated AMPK while inhibited STAT-3 in SW872 cells, and siRNA-based genetic silencing of AMPK or STAT-3 considerably blocked the growth-suppressive and apoptotic response of 6-Shogaol to SW872 cells. Moreover, 6-Shogaol also upregulated the expression and phosphorylation of GRP-78, eIF-2α, ATF4, and CHOP, known ER stress markers, in SW872 cells, illustrating the induction of ER stress. These findings collectively demonstrate that 6-Shogaol has strong antigrowth and proapoptotic effects on SW872 cells through regulation of the intrinsic caspase pathway, oxidative stress, STAT-3, AMPK, and ER stress.
Keywords: 6-shogaol; caspase-9; AMPK; STAT-3; ER stress; SW872 6-shogaol; caspase-9; AMPK; STAT-3; ER stress; SW872

Soft tissue sarcomas (STS) are rare solid malignant tumors with different histologies and are commonly characterized by aggressive characteristics locally and in distant metastases [1,2]. Liposarcoma (LS) represents one of the most common subtypes of STS and originates from adipocytes [3]. LS is associated with considerable morbidity and mortality and particularly poor prognosis, due to local recurrence and tendency to metastasize to lungs and liver [4,5]. Estimated 1.313 × 104 new cases and 5350 deaths from soft tissue sarcoma have reported in the United States in 2020 [6]. Despite the development and clinical utilization of new targeted chemotherapeutic agents, improved radiation targeting, and surgical techniques, only minimal increases in sarcoma patients’ overall survival have been demonstrated in the last two decades [7]. There remains a great need for more effective and nontoxic antineoplastic drugs to enhance locoregional disease control as well as overall survival in sarcoma patients.
Apoptosis (programmed cell death) has received much attention as a possible mechanism for the elimination of extensively proliferating cancerous cells. It is accompanied by distinct morphological changes including plasma membrane blebbing, depolarization of mitochondria, chromatin condensation, and DNA fragmentation [8]. Several proteins are known to involve in apoptosis induction. Caspases are vital for the implementation of cell apoptosis triggered by different apoptotic stimuli [9]. Caspase activities are regulated by the family of the B-cell lymphoma-2 (Bcl-2) and inhibitor of apoptosis protein (IAP) [10,11]. Mounting of evidence has demonstrated the reduced expression of Bcl-2 and IAPs by anticancer agents in cancer cells, which is crucial for their anticancer mechanism [12,13]. AMP-activated protein kinase (AMPK) is a highly sensitive sensor of intracellular energy homeostasis [14]. Of note, a wealth of information illustrates that activation of AMPK contributes to the induction of apoptosis in several cancer cells exposed to anticancer drugs [15,16,17]. Signal transducer and activator of transcription-3 (STAT-3) belongs to the STAT family of proteins, which are both signal transducers and transcription factors [18]. In many solid tumors, STAT-3 is constitutively activated and provides neoplastic cells with proliferation signals with survival advantages, and genetic silencing or pharmacological inhibition of STAT-3 leads to the induction of growth suppression and apoptosis [19,20,21].
Increasing evidence also illustrates that the overload of the endoplasmic reticulum (ER) results in ER stress, which eventually leads to the inhibition of cell survival or the induction of cell death [22,23]. The ER is a highly dynamic organelle involved in various cellular functions such as protein synthesis, protein folding, trafficking, lipid synthesis, and calcium (Ca2+) regulation [24]. A number of chemotherapeutic drugs can trigger the accumulation of unfolded proteins, resulting in ER stress [25]. Severe or prolonged ER stress is characterized by not only overexpression of glucose-regulated protein (GRP-78), CCAAT enhancer-binding protein homologous protein (CHOP), and activating transcription factor (ATF-4) but also hyperphosphorylation of PKR-like endoplasmic reticulum kinase (PERK) and eukaryotic initiation factor 2-α (eIF2-α) [26,27,28]. Recent studies have also stressed a crucial role of oxidative stress through reactive oxygen species (ROS) production in the process of apoptosis induction in cancer cells [29].
Interestingly, 6-Shogaol is a bioactive ingredient in ginger (Zingiber officinale Roscoe) and has anticancer properties against many human cancer cells [30,31,32]. However, up to date, the anticancer effect and mechanism of action of 6-Shogaol in liposarcoma are unknown. In this study, we investigated whether 6-Shogaol inhibits the growth of SW872 (undifferentiated) and 93T449 (differentiated) cells, two different human liposarcoma cell lines. In this article, we report, for the first time, that 6-Shogaol has strong antigrowth effects on SW872 and 93T449 cells, and its growth-inhibitory and proapoptotic effects on SW872 cells are mediated through regulation of the intrinsic caspase pathway, oxidative stress, STAT-3, AMPK, and ER stress.

SW872, 93T449, and 3T3-L1 cells were seeded in a 24-well plate with the density at 1 × 105 cells/mL per well in the final volume of 500 μL. After overnight incubation, cells were treated with vehicle control (DMSO; 0.1%) or with 6-Shogaol or other drugs [z-VAD-fmk or N-acetyl-L-cysteine (NAC)] at the indicated concentrations for different periods (8 and 24 h). At each time point, the number of surviving cells, based on the principle that live cells have intact cell membranes, which cannot be stained with trypan blue dye (0.4%, cat. no. 15250-061, Gibco, Grand Island, NY, USA), were counted. Approximately 100 cells were counted for each evaluation. For cell morphology analysis, phase-contrast images of the conditioned cells treated with or without 6-Shogaol or transfected with siRNA (control, STAT-3, and AMPK) were taken with a phase-contrast microscope (Nikon Eclipse TS200, Nikon Corp., Tokyo, Japan).

SW872 cells were seeded at a density of 200 cells/well in 24-well plate. After overnight incubation, cells were treated with different concentrations of 6-Shogaol (1, 5, 10, and 20 μM) for two weeks. Colonies were fixed with 100% methanol and stained with 0.5% crystal violet [33].

Evaluation of fragmented genomic DNA was processed as described previously [34]. Briefly, SW872 cells were seeded (1 × 105 cells per mL) in 100-mm petri-plate the day before treatment. Cells were treated with vehicle control or 6-Shogaol and/or z-VAD-fmk for 24 h. Later, cells were collected, washed, and lysed in a buffer containing 50 mM Tris (pH 8.0), 0.5% sarkosyl, 0.5 mg/mL proteinase K, and 1 mM EDTA at 55 °C for 3 h, followed by the addition of RNase A (0.5 μg/mL) for a further 18 h at 55 °C. The lysates were then centrifuged at 1 × 104× g for 20 min, genomic DNA in the supernatant was extracted with an equal volume of neutral phenol-chloroform-isoamyl alcohol mixture (25:24:1) and analyzed electrophoretically on a 1.8% agarose gel containing Gel Red nucleic acid stain (cat. no. 41003, Biotium, Fremont, CA, USA).

After 24 h treatment with vehicle control (DMSO; 0.1%), 6-Shogaol (20 µM) or other chemicals (z-VAD-fmk or NAC), SW872 cells were collected, washed with PBS, and fixed in ice-cold 70% ethanol at least for 2 h at 4 °C. Before the quantification, cells were washed once with PBS and incubated in 1 mL of cold propidium iodide solution comprising 100 μg/mL RNase A, 50 μg/mL propidium iodide, 0.1% (w/v) sodium citrate, and 0.1% (v/v) NP-40 and incubated on ice for 30 min in the darkness. Later, cytometric analyses were carried out using flow cytometer (FACS Caliber, Becton Dickinson, Franklin Lakes, NJ, USA) and CellQuest software (version 5.2, Becton Dickinson, Franklin Lakes, NJ, USA).

Proteins (50 µg) were loaded and run in 10% or 12% of SDS-polyacrylamide gel electrophoresis (SDS-PAGE). After separation of proteins, they were transferred onto polyvinylidene difluoride membrane (PVDF, Millipore, Bedford, MA, USA) and then blocked with 5% (w/v) skim milk in TBST for 1 h at room temperature (RT). Membranes were incubated with specific antibodies listed in Supplementary Table S1 at 4 °C. Later, membranes were rinsed with TBST buffer and further incubated with anti-goat IgG or anti-mouse IgG or anti-rabbit IgG coupled with horseradish peroxidase for 2 h at RT. Later, membranes were rinsed three times with TBST and developed with enhanced chemiluminescence (ECL) reagents. Actin expression levels were used as an equal protein loading control.

For small interfering RNA (siRNA) transfection, SW872 cells were seeded at a density of 1 × 105 cells/mL into 6-well plates and transfected with a final concentration of 100 pM of control, AMPK, STAT-3 siRNA, using Lipofectamine® RNAiMAX Transfection Reagent (Invitrogen, Waltham, MA, USA) for 6 h. Later, culture media of conditioned cells was replenished with fresh DMEM with 10% HI-FBS and incubated additionally for 18 h. After 24 h of transfection with AMPK siRNA, conditioned cells were treated with or without 6-Shogaol (20 µM) for the additional 24 h. The numbers of surviving cells were counted under the microscope and whole cell lysates were also prepared from the conditioned cells for Western blot analysis.

SW872 cells (0.3 × 105 cells per well) were plated in 96-well plate and treated with or without 6-Shogaol (20 μM) or 2-deoxyglucose (2-DG), glucose mimetic that depletes levels of cellular ATP, for the indicated times and doses. Cellular ATP levels were assessed by ATPLite 1step (#6016941, PerkinElmer Inc., Waltham, MA, USA) according to the manufacturer’s protocol.

Several studies have demonstrated that STAT-3 is aberrantly activated and plays a crucial role in tumor initiation and progression in many cancers, including STS [19,20,21]. This promptly led us to investigate whether STAT-3 is expressed and phosphorylated in SW872 cells, and 6-Shogaol modulates these. Notably, in the absence of 6-Shogaol, there were high expression and phosphorylation levels of STAT-3 in SW872 cells at times tested (Figure 3A). However, treatment with 6-Shogaol strongly diminished the phosphorylation levels of STAT-3 at times applied. Of further interest, although 6-Shogaol treatment at 4 h did not affect the total protein expression levels of STAT-3, 6-Shogaol treatment at 8 or 24 h resulted in a considerable decrease in the protein’s total expression levels. We further confirmed the role of STAT-3 inhibition in the 6-Shogaol-induced reduction of SW872 cell survival using STAT-3 siRNA transfection. As clearly shown in Figure 3B, there was a complete loss of endogenous STAT-3 expression in STAT-3 siRNA-transfected SW872 cells compared with the control siRNA-transfected ones. Subsequent cell count analysis and microscopic observation data showed considerable growth inhibition of STAT-3 siRNA-transfected SW872 cells compared with control siRNA-transfected ones (Figure 3C,D). Of further importance, the STAT-3 knockdown led to the activation of caspase-3 and PARP cleavage in SW872 cells (Figure 3E). The expression levels of control actin protein remained constant under these experimental conditions.

This study was supported by the National Research Foundation of Korea (NRF) Grant funded by the Korea Government (MSIP) (No. 2014R1A5A2010008). 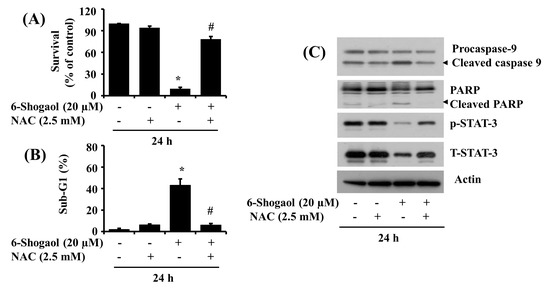 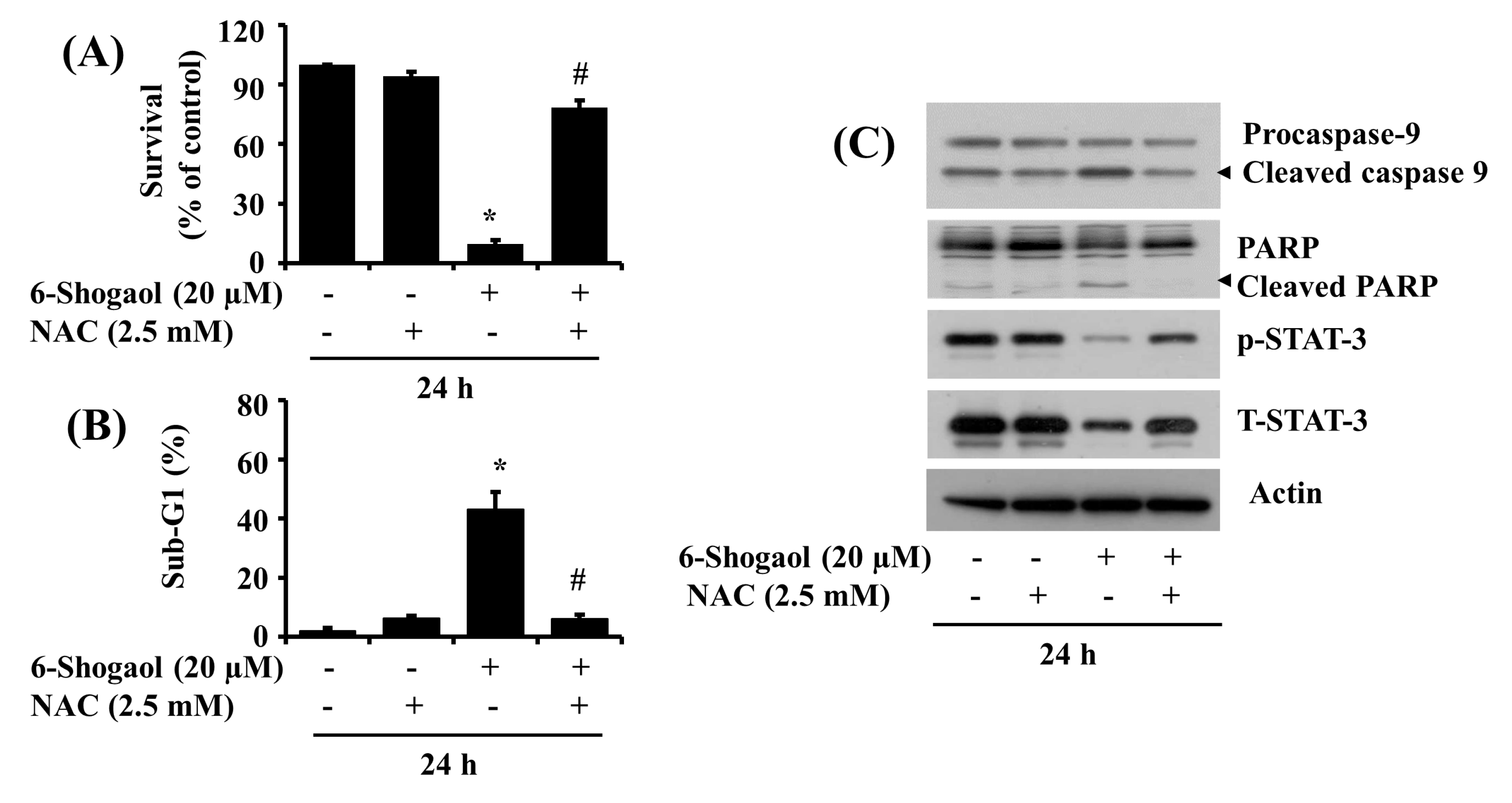 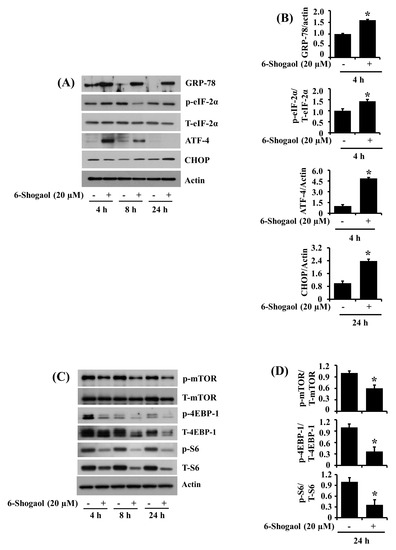 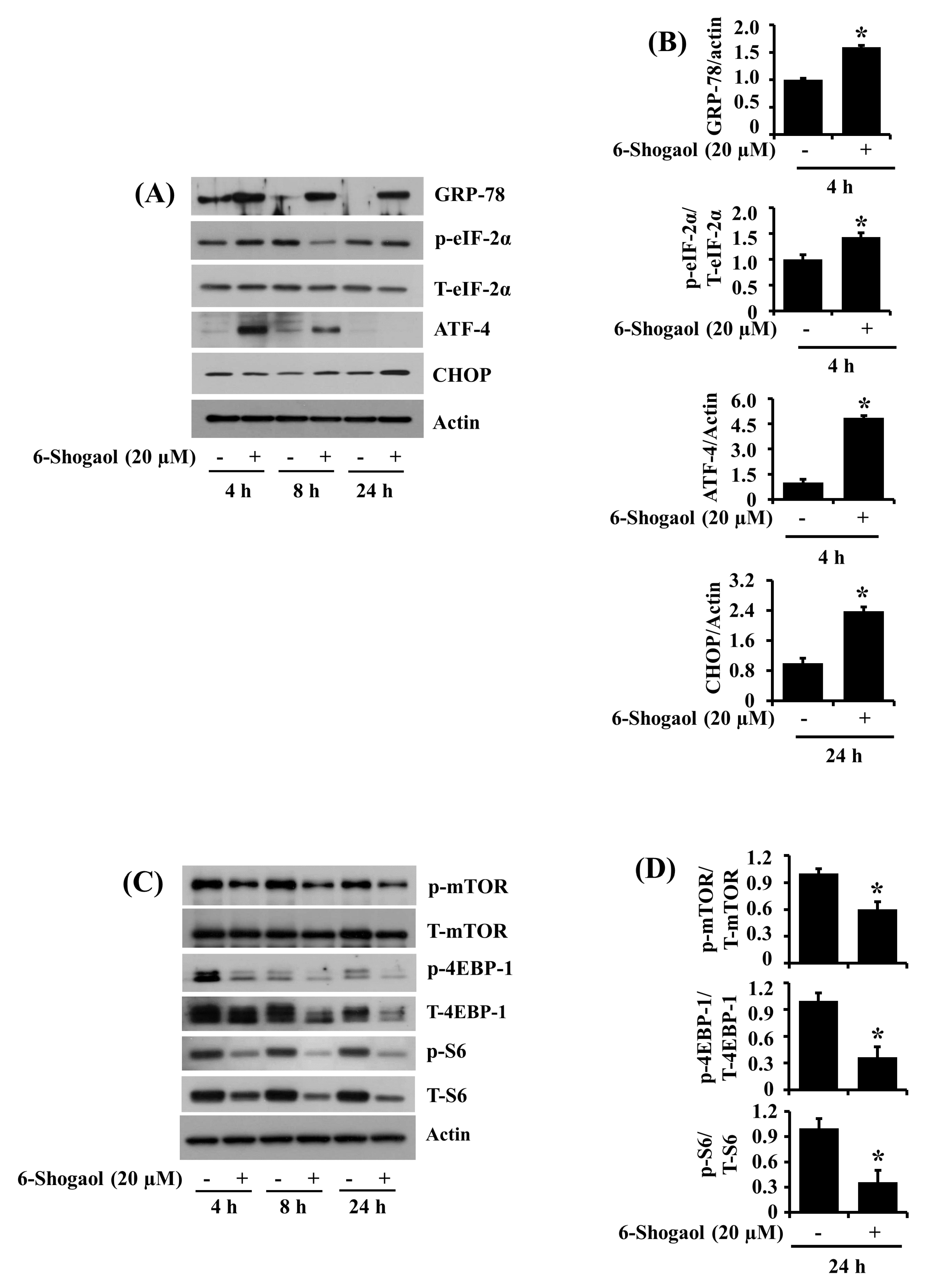