:
The O I 777-nm triplet transition is often used for plasma density diagnostics. It is also employed in nonlinear optics setups for producing quasi-comb structures when pumped by a near-resonant laser field. Here, we apply computer simulations to situations of the radiating atom subjected to the plasma microfields, laser fields, and both perturbations together. Our results, in particular, resolve a controversy related to the spectral line anomalously broadened in some laser-produced plasmas. The importance of using time-dependent density matrix is discussed.
Keywords:
dynamic Stark effect; plasma line broadening; laser–plasma interactions; computer simulations

The plasma Stark broadening of the O I 777-nm triplet (individual components at 777.19, 777.42, and 777.54 nm [1]) appears to be a controversial topic. The theoretical values, among the plasma broadening parameters of many other neutral and singly ionized atoms were published in the monograph of Griem [2] and later updated [3]. On the experimental side, Baronets and Bykova [4] reported about excess of the measured width of the line and attributed it to an unknown mechanism, perhaps related to chemical activity of oxygen, and suggested more studies would be needed to resolve the issue. Bernhardt et al. [5] observed a much larger, 6.7× discrepancy in their experiment. Notably, in that study a plasma filament was formed by a femtosecond Ti:sapphire () laser pulse in air. On the other hand, a very recent experimental study of Sainct et al. [6] found a fair agreement in the density determined from the Stark broadening of the O I 777-nm line and that of hydrogen Balmer- and - in pulsed discharges at atmospheric pressure. The typical electron density in this case was 1–2 orders of magnitude higher than in [4,5], though.
Although disagreements between theoretical and experimental plasma Stark-broadening coefficients of so called isolated lines [3] are not unheard of, they typically increase with the charge of the radiator species but still do not exceed a factor of two or so [7]. The 6–7-times disagreement, especially for a neutral radiator, is truly outstanding and calls for a resolution. This is of particular concern since new studies, using the Stark-broadening constant inferred in [5] for plasma diagnostics, continue to be published (e.g., [8,9]).
Recently, Ilyin et al. [10] suggested that the significantly larger broadening observed in [5] might, in fact, be caused by the laser field (after the main pulse) that happened to be nearly resonant with the transition investigated. Indeed, very pronounced sideband features of this line in laser-generated microplasmas were reported by Compton et al. [11]. It should be noted that in [10], the calculations were approximate (readily acknowledged by the authors) due to a rather complex interplay between the plasma electron impacts, laser fields, and the spin–orbit atomic interaction, requiring a fairly advanced modeling for accurate treatment.
The objective of the present work is twofold: first, to calculate the plasma Stark broadening of the 777-nm line using modern techniques, namely, a computer simulation (CS) modeling [12] and second, to investigate the influence of the laser field on the shape of this line using the same CS.
Our results of the plasma Stark broadening closely match those of [3]. It is also confirmed that a moderate laser radiation causes a noticeable shift of all triplet components and, with an appropriate distribution of the magnitudes, may result in effective broadening and shift that could be misattributed to a higher plasma density.
In addition, we find out that the 1064-nm radiation of a Nd:YAG laser, which is also frequently used in various applications, can affect the shape of the 777-nm transition in a similar way due to a different nearly resonant atomic-level interaction. Furthermore, our calculations show a minor effect of the magnetic component of the laser electromagnetic field.

We use a variant of CS described in [13] and extended to account for the laser electromagnetic fields [14]. Briefly, the Hamiltonian of the atomic system of the radiator is a sum of the unperturbed Hamiltonian and a time-dependent perturbation V: where the perturbation is due to the simulated plasma electric field and the laser electric and magnetic fields acting on the dipole electric and magnetic moments of the radiator:
The simulation follows the reduced-mass model [15] using a spherical volume with a static radiator fixed at its center and radius of several times the electron Debye length to ensure convergence [16]. The Debye potential is used to calculate the electric field acting on the radiator. The motion of Debye quasiparticles is, in general, obtained by accounting for monopole interactions between them and the radiator using a velocity Verlet algorithm [17]. For the present calculations, however, the radiators are neutral and, therefore, the trajectories of all plasma particles were assumed straight. Such very fast Debye-quasiparticle molecular dynamic simulations provide rather accurate results for weakly-to-moderately coupled plasmas, as follows from comparisons with fully interacting N-body simulations [18,19].
The time-dependent Schrödinger equation (2) is numerically solved by introducing the time-development operator in the interaction representation:(here and below, is assumed). The time evolution of the dipole operator is then obtained: and its Fourier transform, is used to calculate the line spectrum in the dipole approximation:
Here, the i and f indices run over the initial and final levels, respectively, is the level-energy difference, and the angle brackets denote an averaging over several runs of the code (which corresponds to an averaging over a statistically-representative ensemble of radiators). The density matrix is assumed to be diagonal and independent of time, as is customary in line-shape broadening calculations [3].
The atomic Hamiltonian includes, in addition to the initial and final levels of the transition of interest, six other close levels with strong dipole couplings to either or ; namely, , , , , , and (here and further on, the common electronic configuration core is omitted). The level energies and the dipole oscillator strengths are taken from the NIST database [1]. The quadrupole contribution to the line broadening is neglected, since it was shown, by several independent calculations, to have a minor effect on the isolated-line widths and shifts [20].

Computer simulations were used to calculate Stark effect of the O I 777-nm line in plasma, and under the influence of laser field. Our results of the plasma Stark broadening closely match those of Griem [3], while the shift is significantly smaller. We also observe that a moderately intense radiation of near-visible IR laser radiation causes a noticeable Stark shift and/or splitting. More generally, similar phenomena likely exist in other neutral or weakly ionized species where transitions between various levels separated by 1–2 eV are rather common. Given the ever growing use of powerful lasers for producing plasma in fundamental research and various applications, care should be exercised to avoid possible misinterpretation of the laser-field-induced effects of pre- or post-pulses in Stark-based plasma density diagnostics.
On the other hand, the observation of the Stark-affected pattern under the laser field can be used for determination of the areal power density of laser radiation at the level of 10–10 W/cm—for example, prepulses of intense femtosecond beams.

Calculations and original draft preparation by E.S.; E.S., E.K., Y.M. and V.M. contributed to the analysis, discussions, and the final shaping of the manuscript. All authors have read and agreed to the published version of the manuscript.

We thank Ramy Doron for drawing our attention to the controversial results of [5]. 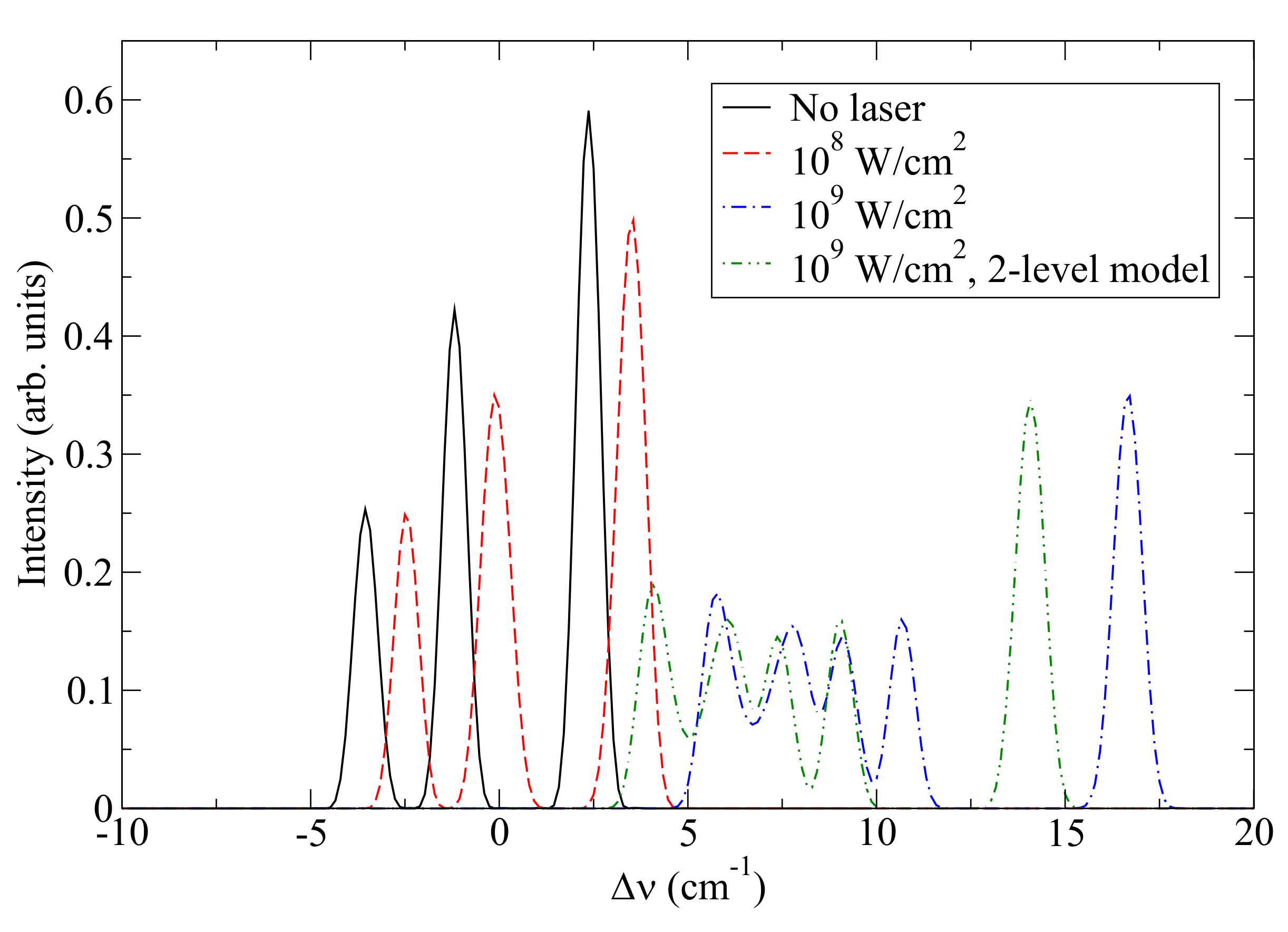 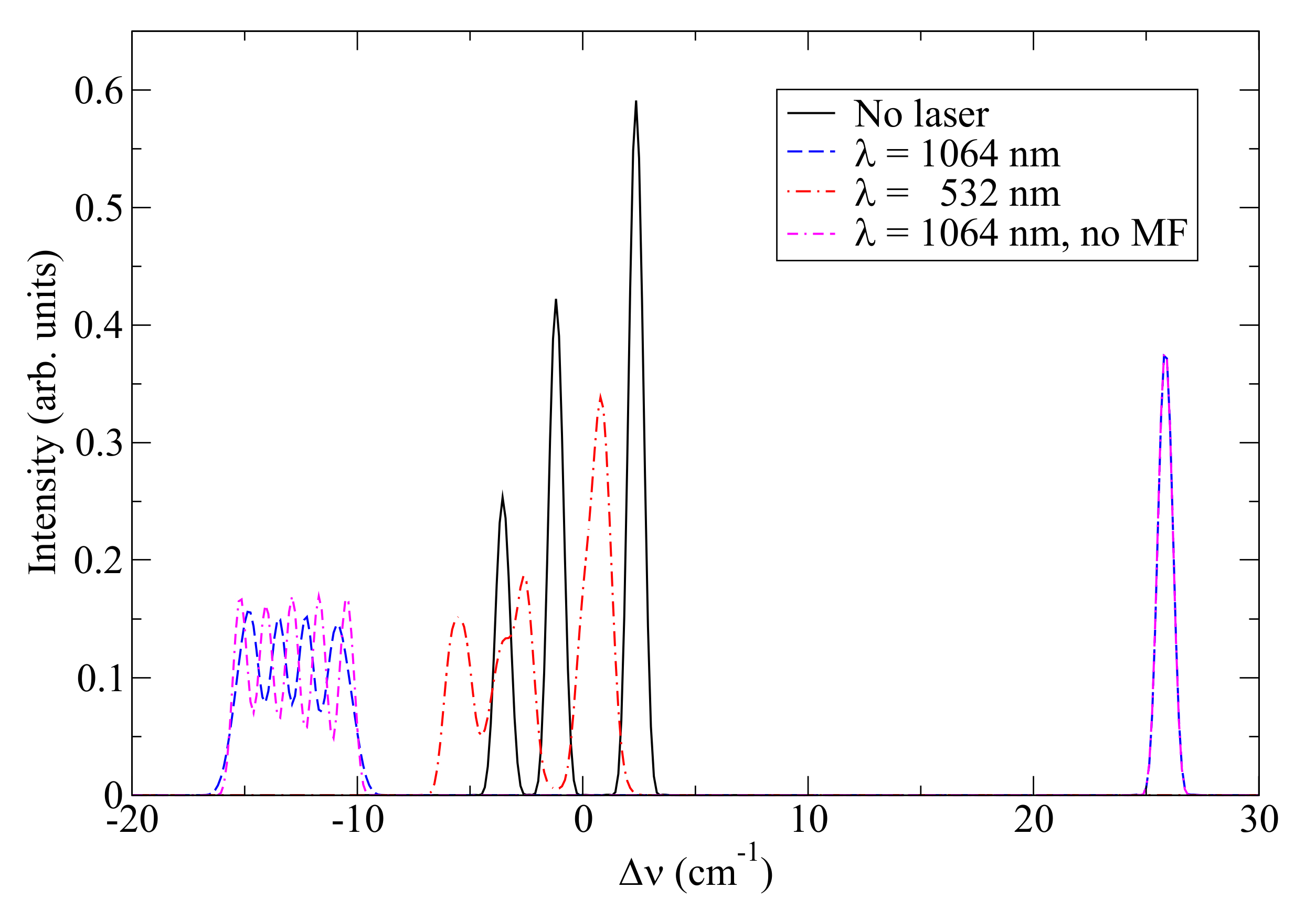 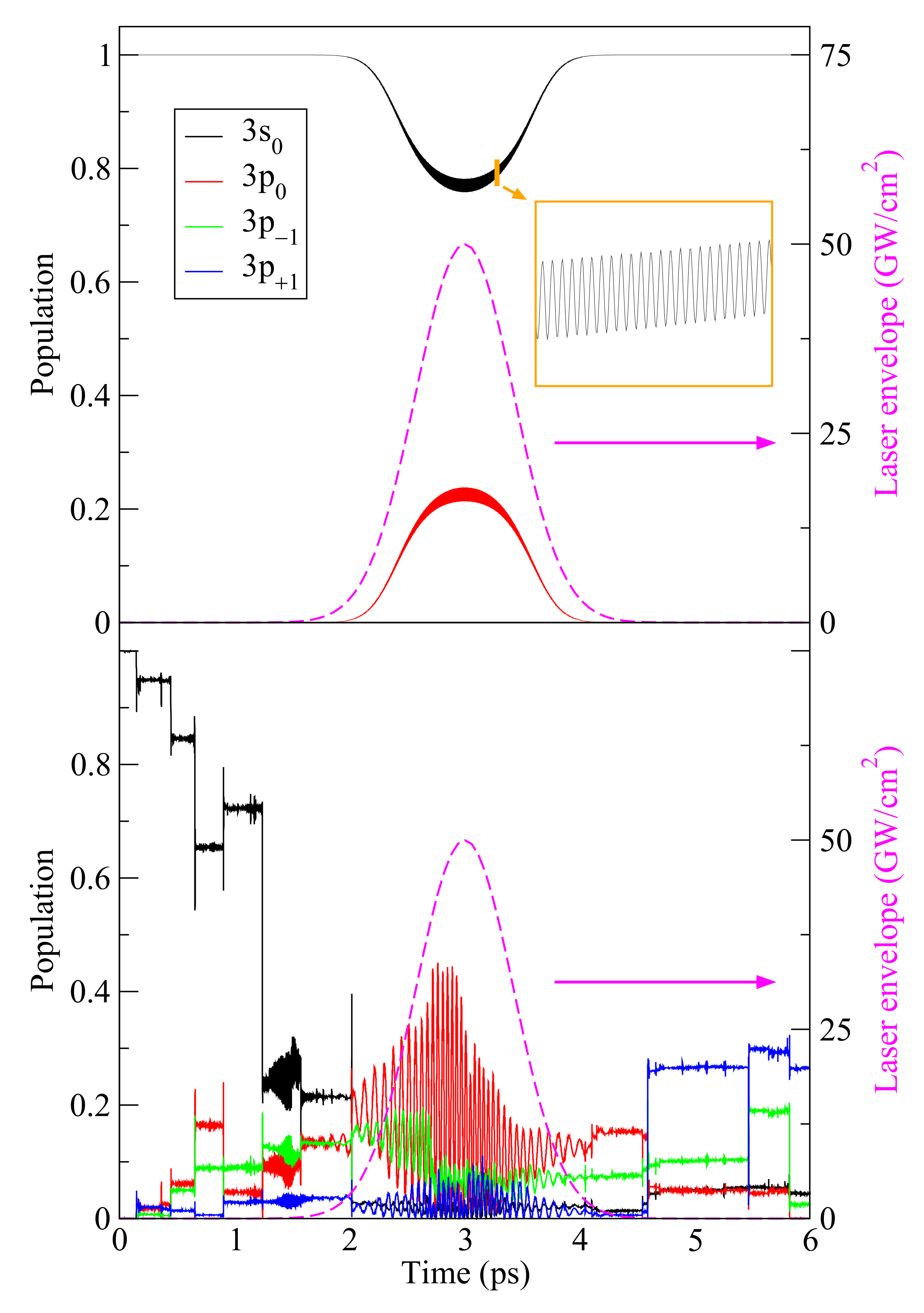