Analysis of microscopic specimens has emerged as a useful analytical application in metabolomics because of its capacity for characterizing a highly homogenous sample with a specific interest. The undeviating analysis helps to unfold the hidden activities in a bulk specimen and contributes to the understanding of the fundamental metabolisms in life. In NMR spectroscopy, micro(µ)-probe technology is well-established and -adopted to the microscopic level of biofluids. However, this is quite the contrary with specimens such as tissue, cell and organism. This is due to the substantial difficulty of developing a sufficient µ-size magic-angle spinning (MAS) probe for sub-milligram specimens with the capability of high-quality data acquisition. It was not until 2012; a µMAS probe had emerged and shown promises to µg analysis; since, a continuous advancement has been made striving for the possibility of µMAS to be an effective NMR spectroscopic analysis. Herein, the mini-review highlights the progress of µMAS development—from an impossible scenario to an attainable solution—and describes a few demonstrative metabolic profiling studies. The review will also discuss the current challenges in µMAS NMR analysis and its potential to metabolomics. View Full-Text
Keywords: NMR; metabolomics; magic-angle spinning; HR-MAS; micro-MAS; metabolic profiling NMR; metabolomics; magic-angle spinning; HR-MAS; micro-MAS; metabolic profiling
►▼ Show Figures 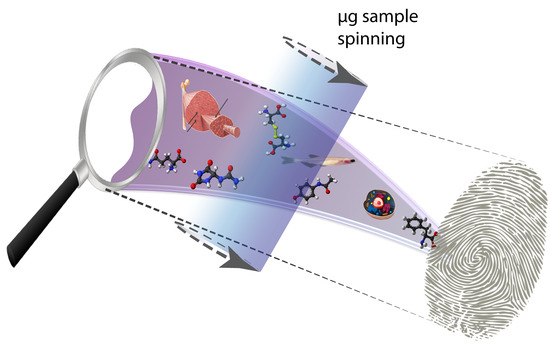