Cercospora leaf spot (CLS) is one of the most serious leaf diseases for sugar beet (Beta vulgaris L.) worldwide. The breeding of sugar beet cultivars with both high CLS resistance and high yield is a major challenge for breeders. In this study, we report the nuclear magnetic resonance (NMR)-based metabolic profiling of field-grown leaves for a subset of sugar beet genotypes harbouring different levels of CLS resistance. Leaves were collected from 12 sugar beet genotypes at four time points: seedling, early growth, root enlargement, and disease development stages. 1H-NMR spectra of foliar metabolites soluble in a deuterium-oxide (D2O)-based buffer were acquired and subjected to multivariate analyses. A principal component analysis (PCA) of the NMR data from the sugar beet leaves shows clear differences among the growth stages. At the later time points, the sugar and glycine betaine contents were increased, whereas the choline content was decreased. The relationship between the foliar metabolite profiles and resistance level to CLS was examined by combining partial least squares projection to latent structure (PLS) or orthogonal PLS (OPLS) analysis and univariate analyses. It was difficult to build a robust model for predicting precisely the disease severity indices (DSIs) of each genotype; however, GABA and Gln differentiated susceptible genotypes (genotypes with weak resistance) from resistant genotypes (genotypes with resistance greater than a moderate level) before inoculation tests. The results suggested that breeders might exclude susceptible genotypes from breeding programs based on foliar metabolites profiled without inoculation tests, which require an enormous amount of time and effort. View Full-Text
Keywords: NMR; metabolomics; sugar beet (Beta vulgaris L.); Cercospora leaf spot disease NMR; metabolomics; sugar beet (Beta vulgaris L.); Cercospora leaf spot disease
►▼ Show Figures 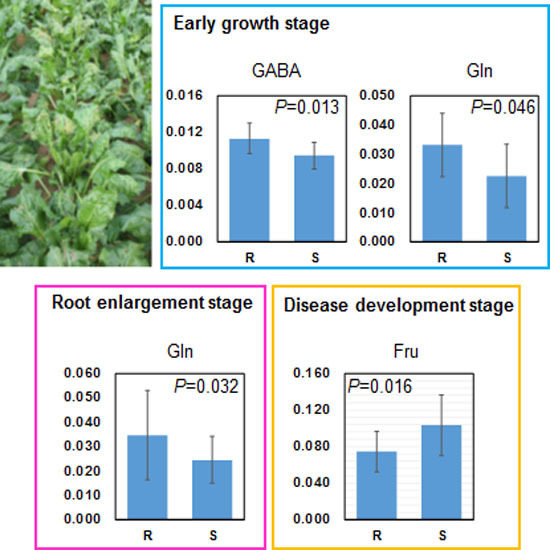