Exercise is important in the prevention and treatment of the metabolic syndrome (MetS), a cluster of risk factors that raises morbidity. Metabolomics can facilitate the optimization of exercise prescription. This study aimed to investigate whether the response of the human urinary metabolic fingerprint to exercise depends on the presence of MetS or exercise mode. Twenty-three sedentary men (MetS, n = 9, and Healthy, n = 14) completed four trials: resting, high-intensity interval exercise (HIIE), continuous moderate-intensity exercise (CME), and resistance exercise (RE). Urine samples were collected pre-exercise and at 2, 4, and 24 h for targeted analysis by liquid chromatography-mass spectrometry. Time exerted the strongest differentiating effect, followed by exercise mode and health status. The greatest changes were observed in the first post-exercise samples, with a gradual return to baseline at 24 h. RE caused the greatest responses overall, followed by HIIE, while CME had minimal effect. The metabolic fingerprints of the two groups were separated at 2 h, after HIIE and RE; and at 4 h, after HIIE, with evidence of blunted response to exercise in MetS. Our findings show diverse responses of the urinary metabolic fingerprint to different exercise modes in men with and without metabolic syndrome. View Full-Text
Keywords: metabolomics; urinary metabolites; metabolic syndrome; exercise mode metabolomics; urinary metabolites; metabolic syndrome; exercise mode
►▼ Show Figures 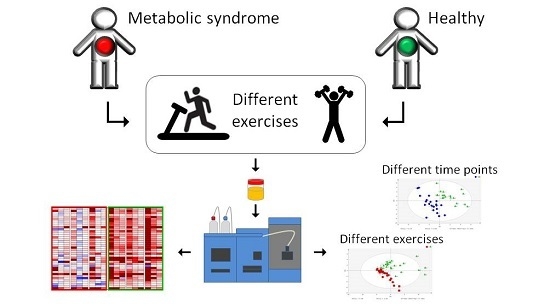