Sexual Dimorphism in the Response of Mercurialis annua to Stress

The research presented stemmed from the observations that female plants of the annual dioecious Mercurialis annua outlive male plants. This led to the hypothesis that female plants of M. annua would be more tolerant to stress than male plants. This hypothesis was addressed in a comprehensive way, by comparing morphological, biochemical and metabolomics changes in female and male plants during their development and under salinity. There were practically no differences between the genders in vegetative development and physiological parameters. However, under salinity conditions, female plants produced significantly more new reproductive nodes. Gender-linked differences in peroxidase (POD) and glutathione transferases (GSTs) were involved in anti-oxidation, detoxification and developmental processes in M. annua. 1H NMR metabolite profiling of female and male M. annua plants showed that under salinity the activity of the TCA cycle increased. There was also an increase in betaine in both genders, which may be explainable by its osmo-compatible function under salinity. The concentration of ten metabolites changed in both genders, while ‘Female-only-response’ to salinity was detected for five metabolites. In conclusion, dimorphic responses of M. annua plant genders to stress may be attributed to female plants’ capacity to survive and complete the reproductive life cycle. View Full-Text
Keywords: anti-oxidation; dioecious; metabolism; salinity; senescence; stress anti-oxidation; dioecious; metabolism; salinity; senescence; stress
►▼ Show Figures 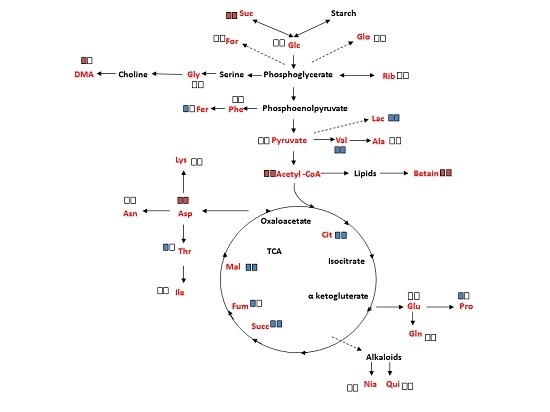