Few major advances in fighting parasitic diseases have been made in China since the development of new methods for prevention, control, and elimination. However, the proportion of immunocompromised individuals has increased due to the growth of chronic diseases, population aging, and more frequent cases of patients with AIDS and cancer. All these problems can promote development of parasitic infections, which is commonly associated with manipulation of host signaling pathways and the innate immune system. Mitogen-activated protein kinase (MAPK) signaling pathways are evolutionarily conserved in metazoan organisms, which play critical roles in the cell cycle, gene expression, growth, differentiation, apoptosis, and parasite–host interactions. Recent discoveries of the MAPK components involved in activation, regulation, and signal transduction appeared to be promising for the diagnosis, prevention, and treatment of parasitic diseases in the future. This review summarizes the involvement and critical role of the MAPK family in parasitic disease development and maintenance in the host. Moreover, it highlights recent studies concerning the mechanisms and novel drug development for inhibition and regulation of MAPK pathways in order to prevent parasitic disease. In addition, we discuss some antigenic proteins as prospective inhibitory molecules or vaccines for the regulation and control of MAPK signaling involved in parasite physiological activity. View Full-Text
Keywords: MAPK; mitogen-activated protein kinase; transduction pathway; parasite MAPK; mitogen-activated protein kinase; transduction pathway; parasite
►▼ Show Figures 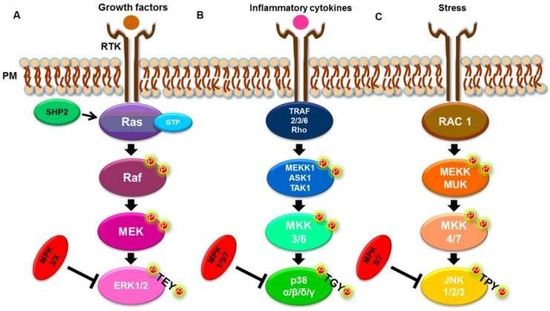